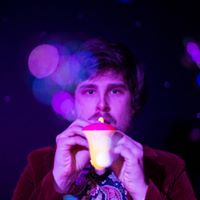 Keen readers of this magazine will recollect the February feature  of Ian Todd & even keener ones will have spotted his name amongst the details of reviews of releases by Shanghai Hostage, of which band he is a member. You can also find their track "Nomad" on "Hot Music Live Presents Volume Two" & a solo track of Ian's, "Citizens of Nowhere" on Volume Three.

This prolific musician has not been letting lockdown clip his wings and apart from some live streamed performances (to be found on the Facebook pages of "Hot Music Live Presents" and the Coventry Culture Show), he's been creating his latest solo album, being one of those artists fortunate enough to be trapped with recording equipment, being able to use it & not being overly reliant on fellow musicians (though of course Shanghai Hostage recordings have been less easy to do, with the magnificent exception of May's "Mr Motivator" single, created with the participation of just Ian & fellow internee Sophie Hadlum).

These sessions are now on hold awaiting the overdubs by others he needs to finish the album, so he has created an hour long ambient piece, entitled, appropriately "Hour Glass" whose accompanying video (by Fred Cox and Diana Stefanescu of Videoblocks) can be accessed at:

Reviewing ambient music is not something I do often (my last effort in this direction was a live review of Toby Marks & Andrew Heath last April) and whether I have the right vocabulary to approach "Hour Glass" is debateable: Ian deserves better than my throwing clichés about the genre at it. I should imagine that the theme is Ian musing upon the possibly differing perspectives of the passing of time during current circumstances (the video features a titular hour glass as a prominent motif & time lapse shooting is another key feature). Other hints as to his thinking include his tagging the piece as for meditation and his suggestion being "I recommend putting on some headphones or proper speakers and sit back in a relaxing place." I should infer from this that the track is intended to impact upon us: it is not an exercise in composition but an interactive tool to aid our well being & benefit us. With that in mind, I first listened to it as he advised and on a purely subjective level I can report that it certainly worked for me. May it do so also for you. I should be failing as a reviewer if I didn't report too that his other tag is "#hippymusic": which it certainly consistent with the Shanghai Hostage approach where humour & serious points intertwine closely: to particularly humane effect, as we have with "Hour Glass". Moving onto the objective, the track is full of variety & frankly surprises. I imagine it is intended to be a succession of movements reflecting differing periods of time & emotions within the larger framework. Hence musical differences are actually quite dramatic: one of Ian's skills is managing the transitions between them so seamlessly. Traditional more laid back sounds, which is what I was expecting to be honest, sit in there with jazzier episodes & rather to my delight, dubbier sections. It will keep your attention throughout the hour, so don't automatically assume it will send you off into a state of mindless bliss (let alone sleep). This is mindfulness music when we need it most.

Sadly, my live reviews for 2020 & 2021 have been disproportionately outnumbered by my reviews of releases (and let's not forget the last word of ...
[3 images] END_OF_DOCUMENT_TOKEN_TO_BE_REPLACED

As prophesised in our recent reviews of his singles "Don't Forget To Breathe" (in June) and "What Goes In Is What Goes Out" (last month), the ...
[1 image] END_OF_DOCUMENT_TOKEN_TO_BE_REPLACED

The time is rapidly approaching (16th of July to be precise) when "What Goes in is What Goes Out", the sophomore single from his ‘Seven Signs of a ...
[2 images] END_OF_DOCUMENT_TOKEN_TO_BE_REPLACED

Having reviewed "Hour Glass" (an hour long ambient piece ) by Ian Todd last summer, I am now pleased to say that I can return to his work again, this ...
[2 images] END_OF_DOCUMENT_TOKEN_TO_BE_REPLACED

We cover so many multi-talented artists in "Hot Music Live": not just musicians but the photographers, visual artists & producers whom they work with.
[1 image] END_OF_DOCUMENT_TOKEN_TO_BE_REPLACED