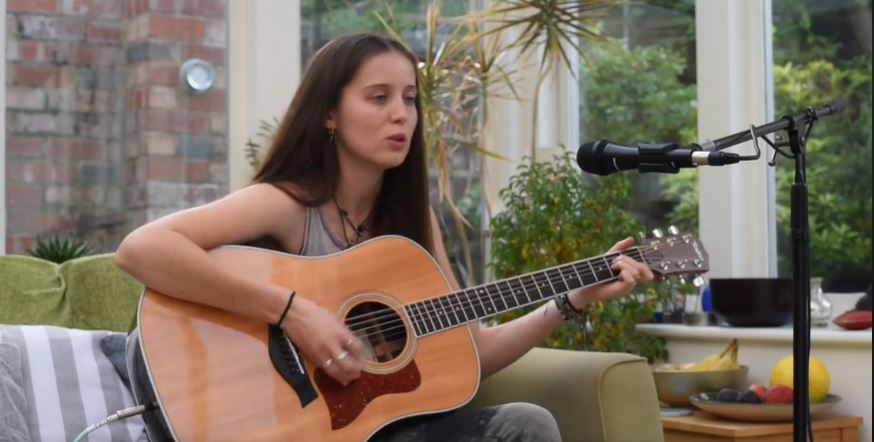 I do like being taken be surprised by music (to be honest I'm not sure I enjoy reviewing music which fails in some way to do so) and I hope I am big enough to acknowledge when I have to revise a previously stated opinion.

My personal take on the arc of Izzie Derry's career was (to put it simply) that she has evolved from a purely solo writer & performer into one who now collaborates very closely with a band for recording & performing and that this must affect how she now writes. Up to her departure for university in Brighton, her performances & records were pure Izzie. Since then, she has worked with a number of fellow students & gradually the Izzie Derry band has coalesced in a current lineup of Herbie Walker (keyboards and backing vocals), Jake Morris (bass guitar), Tom Hammerton (electric guitar) & Noah Haines (drums and percussion).

Previously issued songs were filled out in new arrangements with the extra elements, one ("Let This One Be Mine") even rerecorded with the band.  The magnificent ‘Lost At Sea' EP of April 2019 really explored how her writing could work with these new collaborators, although several of those songs had been played solo before recording so clearly could exist comfortably in either format. In fact key gigs such as Izzie's one with Fairport Convention still featured her playing this material solo to the usual excellent effect.

However, I felt with her 'Take It From Me' EP which was recorded with Grammy winning producer Roger Lomas and released in February (and reviewed in "Hot Music Live"), that for the first time her songs were written to be played in full arrangements & consequently would work only, or best as such (and the EP launch at the Tin, which remains the most recent live experience for me certainly showcased stunning band versions).

Circumstances since then have completely derailed Izzie's many plans for gigs with the band in 2020 & instead she has been offering us a weekly live stream on Sundays at 7 pm, complete with groovy backdrop & increasingly recipe tips (and like many others in similar boats, learning to master the necessary technology to best effect).

Necessarily that has meant a reversion to solo performing & the ‘Take It From Me' songs have all appeared in that format & worked really well: just as powerful in their stripped back form, often more raw in emotion (which works given their lyrical themes) and complementing the fuller arrangements. So, as I say, I hold my hands up as I had underestimated just how flexible & robust these tunes are.

So successful has this been, Izzie has now unveiled a formal live solo video (courtesy of The Factory in Worthing) of one of the songs in question, one of my favourites & a previous single "Fire". I have always found it a really powerful, bluesy number with the band live & perhaps the most strong indicator of how her music has evolved from "folk" into something definitely "folk rock" and probably  blues rock in this case.

As you'll see if you go to https://www.facebook.com/thefactoryliveworthing/videos/263643184850440,  "Fire" solo retains its intensity & some aspects of it actually come across as even more personal & insistent now.

I doubt if anyone knows yet if & when the Izzie Derry Band will play or record together this year & it will be interesting to see how this interlude is reflected in her writing of new material. Ultimately, as with many other excellent writers, this period & its live streams & solo versions may end up as an interesting footnote in careers, but one thing it does do is expose the excellence of writing & help explore the depths of individual songs.

Last evening at Earlsdon Carnegie Community Library saw the "Hush! A Summer Celebration" event, another in the series of collaborations between the ...
[8 images] END_OF_DOCUMENT_TOKEN_TO_BE_REPLACED

If you are anything like me, among the myriad challenges to our communities currently being presented, the probable curtailment of live music for ...
[4 images] END_OF_DOCUMENT_TOKEN_TO_BE_REPLACED

One conundrum I face with reviewing the calibre of artist I tend to focus on (it's an enjoyable challenge really) is how to handle it when ...
[1 image] END_OF_DOCUMENT_TOKEN_TO_BE_REPLACED

It's odd: the more reviews you write, the more patterns emerge.
[1 image] END_OF_DOCUMENT_TOKEN_TO_BE_REPLACED

December 12th is a date many people have possibly been looking forwards to or dreading for various reasons.
[1 image] END_OF_DOCUMENT_TOKEN_TO_BE_REPLACED

I find myself here writing a review which I had never anticipated.
[1 image] END_OF_DOCUMENT_TOKEN_TO_BE_REPLACED