"The Cold Light" by The Silver Wye 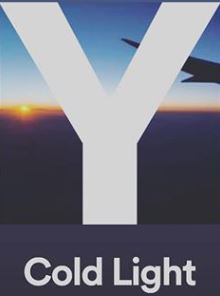 Last night was another Full Moon (and a strawberry one at that, with an added penumbral lunar eclipse) and that these days means a new single from the Silver Wye: this time a song by the title of "The Cold Light".

To be honest, getting my head round this band has been an interesting & stimulating journey over its five song/single career to date. Releases around celestial events are a reliable hallmark, as is the general intention of the project to allow songwriter/singer/guitarist Wes Finch to explore more electronic & processed sounds.

However my attempts to nail down a simple theory about what the songs are about have not been totally successful.  One pattern is the "light" motif: the third single was "You Are Light" and that fits well with the lunar releases. There are generally spiritual vibes if not whole themes at play, though this pattern  gets a bit contorted (or maybe distorted) by the fourth one, the chilling "The Getting Place" where the mood & tone is the supernatural end of the spectrum rather than the more benign one the others inhabit...

At least three are addressed to others who may be lovers or at least loved ones: hymns, pleas, thanks, requests etc and I suppose "The Getting Place" is a warning of sorts.

"The Cold Light" however is another category altogether as the subject is both a third party (with the possible exception of Lucifer the others have tended to be within the first two grammatical persons) as it is inspired by film maker,  vlogger  and "prolific fun haver" Casey Neistat.

Another  percussion centred song, (courtesy of master drummer Ben Haines & which evolves into a highly melodic ending)  the respect of Wes for the subject manages to come through very clearly (one thing about The Silver Wye project is that the tendency of adding more processes to music & voices in particular to distance the listener from the emotion of the words has been avoided very neatly: Wes has somehow found ways round this or chosen emotions to write about which are actually suited to such sounds: spiky, raw, bruised feelings, opening his heart & betraying guilt or dancing with the devil). However, it is interesting that along with the processed sound single, Wes has recorded & released a live acoustic version of "The Cold Light" which returns to the customary warmth of tone of his singing & playing. I'm not at all sure which (if either) I prefer nor which tells the story more effectively. Perhaps that itself is a point…

I was intrigued by a hark back to his Dirty Band days with a shoe laces motif but otherwise the lyric consists of dense & stimulating layers of imagery (two Silver Wye characteristics seem to be the richness of the allusions which you are invited to seek the meaning of yourself to your considerable eventual advantage and the insistent mantra like repetitions of phrases) around travel, sun rises, time zones & ultimately I suppose revelation & truth (if I understand it correctly). If so it offers hope & promises of clarity which are welcome in the current climate.

This is, as well as being their fifth single, the fourth & final song from Wes' Crooked Room Studio session (with Ben, producer Isaac McInnes and bassist Bradley Blackwell). Hence Wes sees it as the conclusion of Phase One of the Silver Wye project: Phase Two though is already underway so please do not worry as it is being carefully created from isolation via file sharing between the participants.

Out right now is a new single by The Silver Wye entitled "Hitman": their first new release since "Cold Light" came out in June 2020, followed by a ...
[1 image] END_OF_DOCUMENT_TOKEN_TO_BE_REPLACED

Normally the autumnal equinox is precisely the time we'd look for a new release from The Silver Wye.
[1 image] END_OF_DOCUMENT_TOKEN_TO_BE_REPLACED

As with their last single, the brooding & allegorical "The Getting Place", The Silver Wye are releasing their latest track "Just My Luck" to mark a ...
[1 image] END_OF_DOCUMENT_TOKEN_TO_BE_REPLACED

The Silver Wye, like any great river, rolls majestically on, picking up speed in the release of its songs.
[1 image] END_OF_DOCUMENT_TOKEN_TO_BE_REPLACED

I'm sorry but I'm afraid I'm going to have to instil a touch of déjà vu in you.
[1 image] END_OF_DOCUMENT_TOKEN_TO_BE_REPLACED

Last November, in "Hot Music Live", I reviewed a song called "Pick Me Up" by an entity calling itself The Silver Wye.
[1 image] END_OF_DOCUMENT_TOKEN_TO_BE_REPLACED