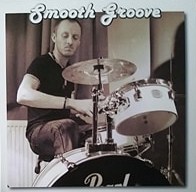 As I said the other week, being surprised as a reviewer is part of the pleasure of doing it. Sometimes artists veer off in unexpected directions & others reveal different & hitherto less noticed facets of their talents.

Many of you will already be fully aware of the drumming skills of Kev Stanley and these have been referenced in reviews not only of Chalk Drawings but other well known local artists he has played with. I hope you have spotted his daily live streams during lockdown? Some really interesting drumming ones, mainly to well known tracks (after he managed to find a way around the thoroughly less than helpful censors on social media) are the predominant content, yet his very first took me by surprise: a solo a cappella performance: which gained a lot of respect.

In that context, it might be useful to examine the lesser known aspects of what Kev does & give his ‘Smooth Groove' EP a belated review.

This three track release obviously features his drumming, but also those other interests & attributes which don't usually get an airing: his ability to write songs, his singing and even his guitar playing. (The only other contributions are all from Thomas Gardner who aided the recording, added additional guitar & bass & sings on the final track).

In fact, like examining a set of Matryoshka dolls, the more one explores this short record, the more intriguing elements come to light.  While not exactly a concept album like the Chalk Drawings' splendid ‘Grand Union', it is born from a deliberate and higher art idea too. Originating as an attempt to record a drum solo track, it grew to become a finished piece which essentially is a suite passing from one actual song, via an intermediate instrumental track into a third one which is another song in a contrasting style to the first one.

While, as you might expect, stylish & imaginative drumming is audibly present on all three pieces, each one has so much more to offer, much of much requires repeated listenings to notice let alone appreciate.

The opening (and in fact title) track is a Rolling Stones style strut which certainly deserves more of an audience (Kev pressed only 150 hard copies: unless you have one, you'll need to check it out on Soundcloud at https://soundcloud.com/kevster-82/sets/kev-stanleys-original-material?) and although Smooth in title & execution actually bounces around in an entertaining & musically witty manner. Close examination of the lyrics reveals specific tributes to much appreciated & sadly lost live music sessions at places like the Great Western or Clarendon & the whole tune has current resonance as a sort of hymn to a live music scene currently in abeyance & perhaps can remind us why we enjoy live music as Kev tells us why he does.

The linking track, "Sticks Groove" is probably the one closet to his original conception, but it is far from some self indulgent demonstration of his drumming (you could play it at least three times during even the shortest version of "Toad") as the tastefully restrained playing acts more as a foundation for a series of effects & samples which evoke a medieval battle and in turn is a tribute to the re-enactments of these at Warwick Castle. This subtle playing actually helps underscore what I have always liked about his playing: it's thoughtful, restrained & very melodic (his live streams are particularly good at showing this too).

Finally we have "Blame" and the melodicism persists into even this, the most overtly "rock" track on the EP. Acting as a sort of counterpoint to the first song, which was overall pretty positive, this one is more introspective in nature and the protagonist examines his role & responsibility for actions which resulted in things going wrong. Emotions run higher as it progresses & from a technical point of view I can understand why Kev asked Thomas to sing as the vocal part is much more demanding. He described it to me as "Thrash Rock' and although it certainly lashes out sonically & lyrically from time to time with good effect, I think that it has a great deal of cool self control & makes its points out of disappointment more than anger at having lost something unnecessarily.

As I say, this record rewards exploration & it left me hoping that if he has this interesting potential up his sleeve, Kev might someday offer us another similar project. He quite understandably downplays this & given the frustration of not being able to drum with others nor gig or record with his existing projects, you might well excuse him for not having the time once the lockdown is lifted. Nevertheless, I certainly enjoyed ‘Smooth Groove' and would encourage him strongly not to close the door on a sequel in principle....