"Songs From The Vaults" Fundraising album for The Tin


"Songs From The Vaults" Fundraising album for The Tin 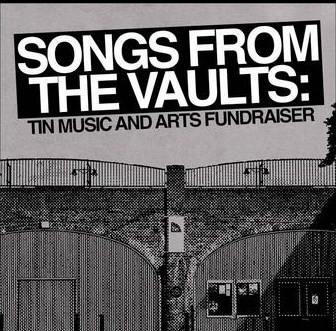 Last week I wrote a piece for "Hot Music Live" looking at some of the (negative) implications for the music scene during the current crisis. As was emerging when I wrote it, artists deprived of income from live performances have released (possibly ahead of schedule) tracks, often choosing recorded material with resonances to our times. Many are already live streaming performances (mainly solo but occasionally having a go at reuniting bands via video links), some asking for donations in return & others monetising them entirely.

Venues simply can't do this, (though some recent movement for businesses from the Government may hopefully help commercial ones) so it's great to see the speed with which a new local music compilation, "Songs From The Vaults" has been put together and released on Bandcamp to raise funds for the Tin Music and Arts Centre.

As well as being one of my favourite local venues, and one of the very few community & charitable status arts centres for our area, it has extra emotional pull for me given that the final live review I wrote for the magazine before the closedown was of Stone Bear & Izzie Derry playing there.

Huge respect therefore to Joe Wilson of Year Without a Summer & Deathsex Bloodbath (check them out on "Hot Music Live Presents Volume One") for pulling this together. I'll let Joe explain his thinking on this:

"I think the thing with the Tin is that there's nowhere else in the city that would necessarily put on Vaudou Game, Hainbach or Anarchistwood, so to have a venue like that encourages more experimental thinking among local musicians, and then gives them a platform.... If the Tin went to the wall, for reasons beyond their control, then there would be a lot of acts with no natural home. That's before we talk about their community work, venue hire and so forth.

With places like Drapers no longer open, it's important to preserve the places which encourage artistic endeavour. For the stuff I've done musically, and the stuff the other folks on the compilation have done, that's always been the Tin. So the fundraising is a way of protecting the venue's survival through its closure, while also ensuring that the staff will continue to get paid throughout this time."

With reference to Joe's words, the compilation really does veer towards that experimental & radical side of musical creativity: the contributing artists stick their necks out a long way, ask questions others are reticent to ask & are reluctant to compromise their art in any way: so they are unlikely to get many gigs in your local to add to their income.

In fact so alternative & exploratory are the artists involved that although Sophie Hadlum had a track on "Hot Music Live Presents Volume Two" and at least one other artist will be on "Volume Three", not too many have been reviewed yet in the magazine, despite our pride in covering the diversity of local music & our delight in the esoteric: I think only Sophie, Ian Todd, We Are A Communist & Batsch to be honest. Some of them I've never previously heard of: which is a good thing for their credibility & a good thing for me as I have now been introduced to their music.

The other artists on the record (round of applause please for their generosity) are Ravens, WolfSuit, the Sequins, Delightful Young Mothers, Two Whole Quails, Charlie Tophill, Felix & Seline, Vieon, Cause of Accident, Dispute Settlement Mechanism, and RobinPlaysChords.

A round of applause too & a thought for all the staff at the Tin whose position must currently be a worry to them: not only the salaried employees but also those working there as sound engineers etc on a freelance basis. I am always impressed with their professionalism & friendliness & they deserve better than insecurity.

Under the circumstances, it almost seems superfluous to consider the actual songs as I normally would in a review. It's as esoteric as you would imagine & eclectic too. That no two tracks sounds remotely alike will not surprise you, from the manic/maniac surf-speed-punk of "Speed of Sound in Space" by We Are A Communist through Sophie Hadlum's much quieter & reflective piano piece "All I've Got Left Of Me", Ian Todd's neurotic & skittery "Parasites", Batsch's cool grooves on "Walking Beds"  the soundscape of  "Tote Mich Noch Einmal" by Two Whole Quails to the absolutely no holds barred whatsoever attack of Dispute Settlement Mechanism on "Queerpocalypse" there is arguably something here for everyone, assuming you have a suitably open mind to music way out of the mainstream. In the interests of succinctness so we all focus on the main goal of raising money plus my own inability to describe some of the tracks adequately, I think I'll leave them for you to explore, enjoy & create your own responses.

It would be dreadful if all the artists emerged from seclusion with a pent up passion to play & audiences similarly to hear & see them, but they had nowhere to play. It's difficult to do too much at the moment as individuals to help commercial venues, but here we have a chance to help one which is a community charity, so please buy the album, spread the word & I'll see you at the Tin when this is over.

Sadly, my live reviews for 2020 & 2021 have been disproportionately outnumbered by my reviews of releases (and let's not forget the last word of ...
[3 images] END_OF_DOCUMENT_TOKEN_TO_BE_REPLACED