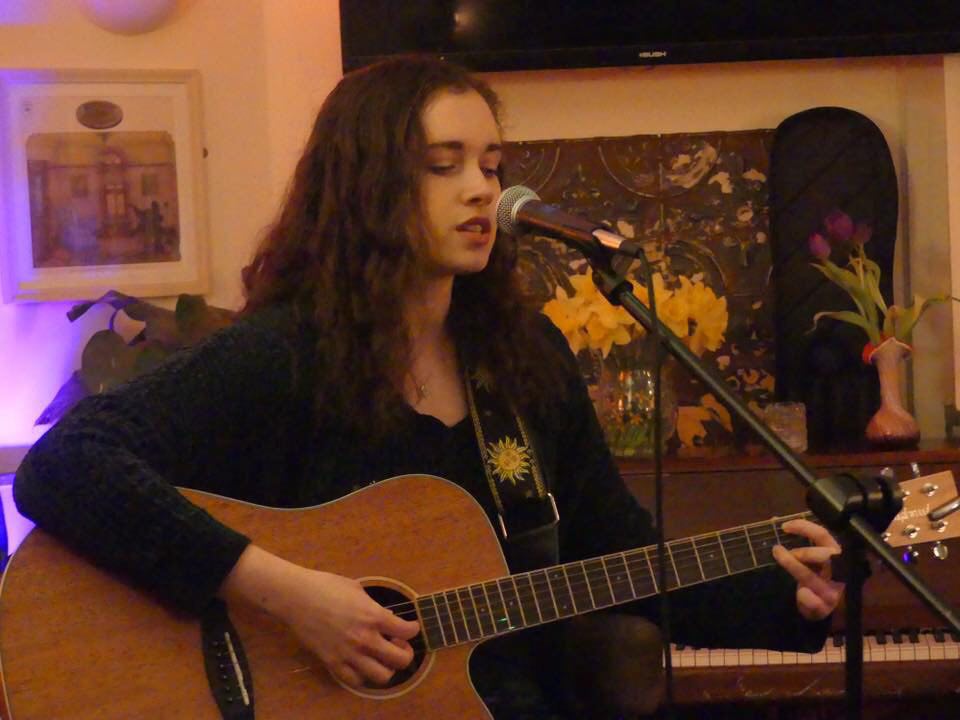 Although I really enjoy writing reviews for "Hot Music Live", I also like telling you about the artists & hopefully during this strange period, time I might have spent on writing live reviews can be spent on features: I wrote one on Ian Todd recently which I hope you enjoyed reading as much as I did writing, and now following on from my review of Chloë Boehm's first release, here is an article about her.

As I suggested in that last article, I'm sure those first steps in performing can be some of the hardest. When the local live scene is as full as it fortunately currently is with wonderful talent, it must take courage to get up in an open mic & sing before an audience including such other musicians. That's why I was so impressed with how someone could go from a virtual standing start to gaining the respect of so many other musicians & releasing her first track within a year. Hopefully by teasing out how she's managed this, her journey can encourage others. In fact I hope during the current period to be able to explore several musicians' stories as there are so many different ways, times & circumstances of getting started: take Thomas Hinks of But Is It Jazz? (see "Hot Music Live Presents Volume Two") for example who began much later in life than Chloë. There certainly is no standard template for an artist & how else does one explain the current level of diversity if not by realising how different everyone is to begin with?

German-American Chloë is twenty one, educated at international school in Nuremberg and she subsequently studied history & politics at Warwick University, whence she graduated in July. Her family background includes both parents being musicians so presumably both nature & nurture have played some role in her getting to this stage, via the degree her LA born mother advised as a backstop before following her dream of a performance career. She is currently "trying to juggle learning how to be an adult, being financially independent for the first time in my life and also trying to get into the creative scene as more than just a hobby".

Although I consider her to be an artist confident in her own creative skin & not sounding much like any other artist in particular, I did ask her (in the time honoured fashion) for her influences, which range from her earliest memories dancing to "everything from Nickleback and Shakira to Vanessa Carlton to Fleetwood Mac to Portuguese music my parents picked up a CD of on one of our trips somewhere" to more recent preferences such as Fleetwood Mac (still), Joni Mitchell, Shawn Colvin, Ben Howard, Hozier, The Beatles, The Who and Palace.

Although a really recent instrumentalist, she has long sang, having first done so on stage at the age of six singing the Dixie Chicks' "Cowboy Take Me Away" at one of her mum's gigs, later on with her at Romanian folk festivals and other gigs and later still being paid to perform at Nuremberg Opera House as part of their youth choir. However school pressures, not being an instrumentalist & a feeling that without being classically trained, a career in music was not an option, she transferred her energies & talents into acting (to excellent effect) in her mid-teens while maintaining song writing as more of a hobby.

Fast forward to last September, the acquisition of a guitar & a lightning progression through learning to play it (with input from her mum) to that crucial first performance in front of others, playing John Prine's "Angel From Montgomery" at a Stratford open mic. Since then she has steadily been honing her skills & building her repertoire with other covers & her own material, the latter of which now form the majority of her set. During those few months Chloë has progressed from playing a single song to being the featured artist at the LEIF open mic in Leamington (coincidentally when I first saw her live in December, now I know she'd only been playing her instrument a couple of months at the time): a trajectory I think many people would regard as ideal for building a performer's confidence but hardly ever within such a compressed timeframe.

Of course such development often comes with the support of others & I do keep on emphasising how much I admire how so many local artists help each other: from simple support at each others' gigs through to much more formal interactions such as teaching, with various stages of mentoring & encouragement on the spectrum between. Chloë readily acknowledges those people who have played such roles: before her splendid local breakthrough there would have been her parents of course, her Uncle Paul who took her to see Cher play when she was only two (he was her musical director), a "dear friend" who encouraged her to restart lyric writing in her teens during her period of less involvement in music through to many names who will be really familiar to you (many of whom I'm pleased to say are "Hot Music Live Presents" artists): Tyron and Rikki Hansel, Luca Falcomer-Dawson, Alfie Amadeus, Erin O'Rourke, Noah Dobbie, David John (who hosts the aforementioned LEIF night) , Adam Barry, Dan Sealey, Chessi O'Dowd,  and Naomi Beth Rodgers. Knowing these people, one can begin to understand how she can have been guided & supported in her playing while completely allowing her to remain her own artist: no sign of Svengali! Even anonymous audience members have played their part in the journey. "I think the height of my open mic career was being told my music reminded a woman of Joni Mitchell".

Chloë has come a very long way in a very short space of time, but she has clear goals for what comes next: to be a support artist for a formal gig (this is being worked on), continue building her set of original material & to learn more about music production.

I asked her about any tips for others who might be contemplating following her path but having not yet taken those first, tentative steps: "try not to be so hard on yourself, everyone has been at the stage you're at now and equally it's entirely up to you how much you do with it - everyone has the capability to push themselves as hard as they want....always put honesty ahead of perfection. Honesty reads, perfection can be achieved with an auto tune function and honesty is compelling... if you can't muster that within yourself, find friends who encourage you, who push you to be creative by association".

As you can see, it really would have been wrong to paraphrase her words as they are so clear & obviously the product of much reflection.

Chloë's journey in music as a singer-songwriter is still in its very first months. Goodness only knows what lies before her & that very uncertainty is exciting: there must be many exciting adventures on the way, especially once live music resumes. However the purpose of this feature is to demonstrate many things I hope:

There are many routes into this sort of creativity.

You can take up instrument playing at any age & still acquire the skills to express yourself without having had to hone them since infancy.

It's OK to take breaks, especially during those school years when you may have competing interests & aspirations.

There are good people out there who won't try to manipulate you, to force you to be another artist than the one you want to be, will offer sage advice, won't push you into situations which you feel uncomfortable with, will not laugh at any fluffs in early performances but will offer encouragement and suggestions relevant to you & your music.