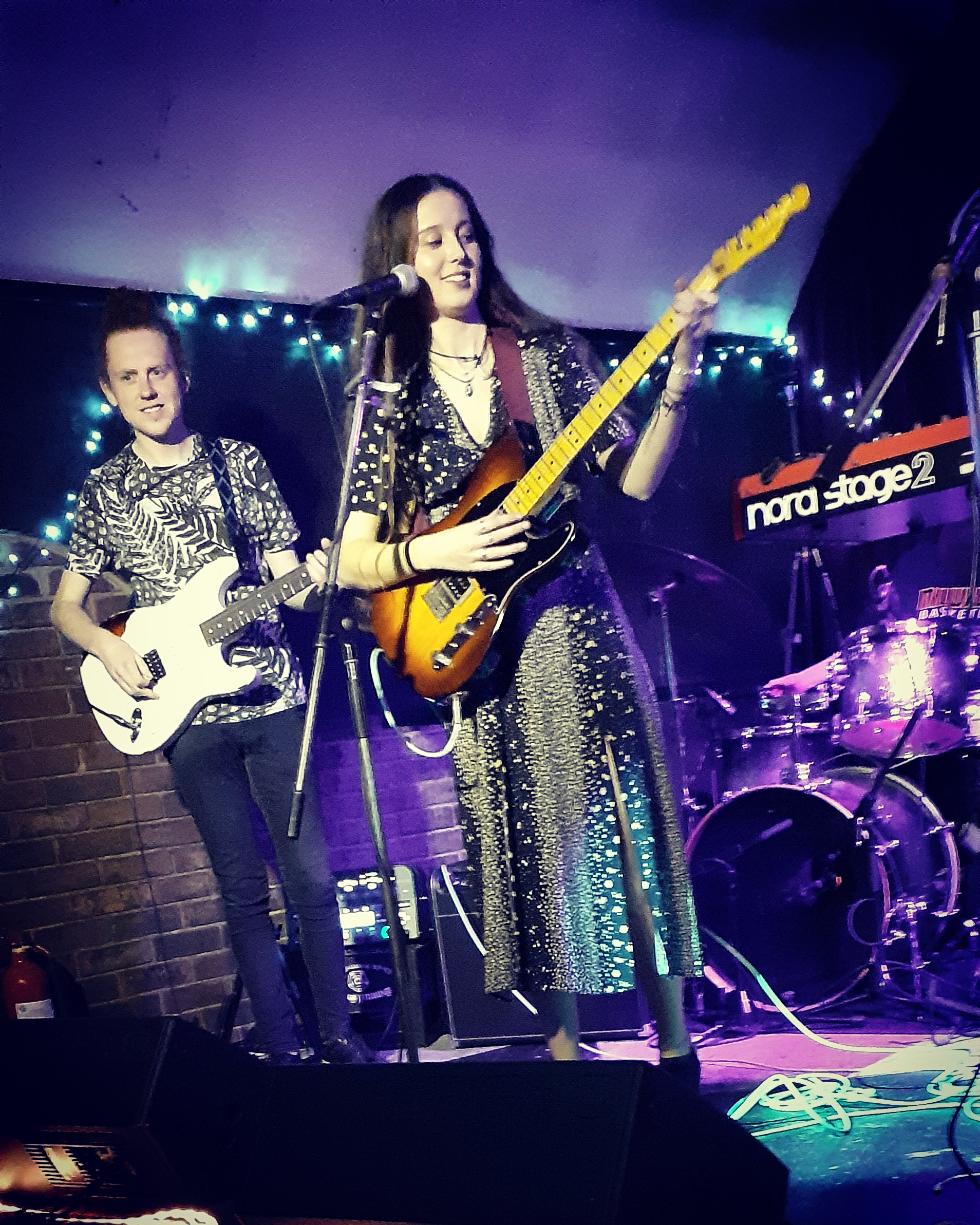 If you are anything like me, among the myriad challenges to our communities currently being presented, the probable curtailment of live music for some period is probably saddening if not traumatic. Being selfish, it is an important emotional & psychological part of my life & I'll be diminished by any hiatus. More importantly than my self centred bleatings though is the potential impact upon the musical scene and business. Already tours & festivals have been called off, long anticipated gigs, often launching new releases etc have been cancelled & many others have doubt hanging over them. Beyond the affected musicians & audiences, not only will the former lose vital income as well as the chances to entertain, but venue staff both technical & support will also & the viability of venues themselves may be threatened. We can only hope that the problems are resolved as soon as possible, structural support measures enacted & already suggestions on support from musical communities can be found online.

It was with sombre thoughts like these in my head that I went along last evening to the launch of Izzie Derry's ‘Take It From Me' EP (reviewed in "Hot Music Live" on February 23rd). I was even wondering if it would take place at all, but the Tin had placed sensible precautions in place (as you knew they would) and if this is to be my last live experience for a while, what a great one it was to sign off temporarily with. Thankfully many others shared my desire to be there: it was an excellent & highly enthusiastic audience.

Having already had a launch event in Brighton where she & her band are currently based, Izzie returned to her home town & invited one of her favourite local acts, and a fellow "Hot Music Live Presents" band, Stone Bear to support them.

David John & Jeff Dennis are no strangers to reviews in this magazine & you will not be surprised to hear how well they played & went down with Izzie's fans. Their set focussed on material recorded since their debut album, most of which was reviewed in the magazine, such as the great singles "Train" "Ole Cherry Tree" & "Woke Up This Mornin'".

Structuring their set in an interesting way, David opened solo with just his voice guitar & harmonica. This really suited the more country blues stylings they have been exploring over the last year or so and gave him ample room to display his talents to the great appreciation of the room. Jeff joined him & without departing from the general style, the volume went up as his urgent & highly inventive drumming added further layers of texture & meaning. No wonder he is so highly regarded at his craft.

One highlight for me was the most recent single "Train": in reviewing the song, I had not fully realised how the track (among many other powerful aspects), emulates a train leaving a station & gradually picking up speed: maybe one has to experience some songs live to get every nuance. However is was spectacular last night. I've heard Stone Bear playing really quietly & they can do really loud too, despite being an acoustic guitar led duo. However I can honestly say I've never heard them play so fast as at the climax of "Train" with not a single intricate fill nor lick fluffed nor missed: and both were as complex at high speed as they were at the beginning.

What on earth can one say about Izzie Derry that I have not said before? Like Stone Bear, I have reviewed her live & recorded work many times & such were the superlatives I used from the beginning that finding fresh ones is a challenge each time... and as I said in reviewing the EP itself "..how to handle it when people you really admire still manage to exceed even your own sky high expectations?".

I even ran this conundrum past two Izzie fans from the earliest days of her career, interested to know their take: which included the observation that it was one of her best gigs ever. Considering how staggeringly high that particular bar is, praise indeed.

There is however no doubt that Izzie, however great her innate talents always have been, is growing as an artist & developing new aspects of her craft. Partly her studies at BIMM (in Brighton) must influence this & I have little doubt that working with this set of highly gifted musicians (Herbie Walker (keyboards and backing vocals), Jake Morris (bass guitar), Tom Hammerton (electric guitar) & Noah Haines (drums and percussion)) for the last couple of years is part of the answer too.

The whole band have evolved as a unit since I first saw them playing together. Originally they provided a high class accompaniment to Izzie in performing her existing material live & gradually became part of expanded arrangements of new material, providing new layers of musical texture & detailing. During this period, all her material (including that on the ‘Lost At Sea' EP of 2019) was equally capable of being delivered effectively to her own solo guitar, in small venues with mostly Jake & Herbie or as a full band. Now however, the songs sound like that are band songs from inception: it is harder to imagine stripped back versions of the ‘Take It From Me' tracks.  This part of the process has no doubt also benefitted from the production skills & experience of Grammy award winner Roger Lomas.

I should date my realisation of what was afoot to seeing this lineup last summer at Leamington Peace Festival: I was shaken by the increase in volume & how they really rocked. No wonder Izzie's web description now reads "folk rock" rather than just the former word. She even donned a Telecaster herself, the first time I've seen her play an electric guitar, for the final part of her set. However louder her accompaniment is though, she still has the vocal power to be heard clearly above it: something which must have been worked on given the current demands as compared with her solo days.

Each band member now is emboldened to contribute more than effective accompaniment: all have more complex instrumental parts on both the new material & rearranged older songs: and not just instrumental: Herbie's backing vocals are now much more prominent & go beyond just harmonising.

The result is quite honestly electrifying on several levels, and I understand the audience comments I cited  above. To return to my own earlier concerns at how to describe the show, I'd say that this is "Izzie Plus": as good as ever but with some new additional & very powerful weapons in her armoury to get her music across.

Understandably the set favoured more recent material which was created by the band: the last two EPs, the seasonal single "In A Year" etc but there was also older material, reworked to often stunning effect in terms of bringing new aspects to our ears and which included "Let This One Be Mine" (released as a single in its new form last year), "Give Me A Reason To Stay" and even "Keep Walking". Plus a rendition of "Happy Birthday" for an audience member.

Whether you feel that this represented a paradigm shift in Izzie's career (I would note that she herself switched the traditional gig brownies for lemon drizzle cake which may be a signifier) or as a huge further step forward in it, doesn't matter I think. There was total consensus that this is a musician going somewhere, and going there fast and with a clear sense of purpose. I guess what is needed now is greater exposure so many others can hear what we regard as an established set of opinions about how great she is.

I do like being taken be surprised by music (to be honest I'm not sure I enjoy reviewing music which fails in some way to do so) and I hope I am ...
[1 image] END_OF_DOCUMENT_TOKEN_TO_BE_REPLACED

One conundrum I face with reviewing the calibre of artist I tend to focus on (it's an enjoyable challenge really) is how to handle it when ...
[1 image] END_OF_DOCUMENT_TOKEN_TO_BE_REPLACED

It's odd: the more reviews you write, the more patterns emerge.
[1 image] END_OF_DOCUMENT_TOKEN_TO_BE_REPLACED

December 12th is a date many people have possibly been looking forwards to or dreading for various reasons.
[1 image] END_OF_DOCUMENT_TOKEN_TO_BE_REPLACED

I find myself here writing a review which I had never anticipated.
[1 image] END_OF_DOCUMENT_TOKEN_TO_BE_REPLACED

Last night was one for the connoisseurs: a whole evening of nothing but top class original music written from personal perspectives & played with ...
[2 images] END_OF_DOCUMENT_TOKEN_TO_BE_REPLACED

Much as I get a huge amount of pleasure writing about our current vibrant & diverse local scene, I get a special thrill when one of my favourite ...
[1 image] END_OF_DOCUMENT_TOKEN_TO_BE_REPLACED

Very many thanks to Michelle Bailey-Le Long for an in depth heads-up about this weekend's Boudica Festival treats at the Tin Music & ArtsYou may ...
[1 image] END_OF_DOCUMENT_TOKEN_TO_BE_REPLACED