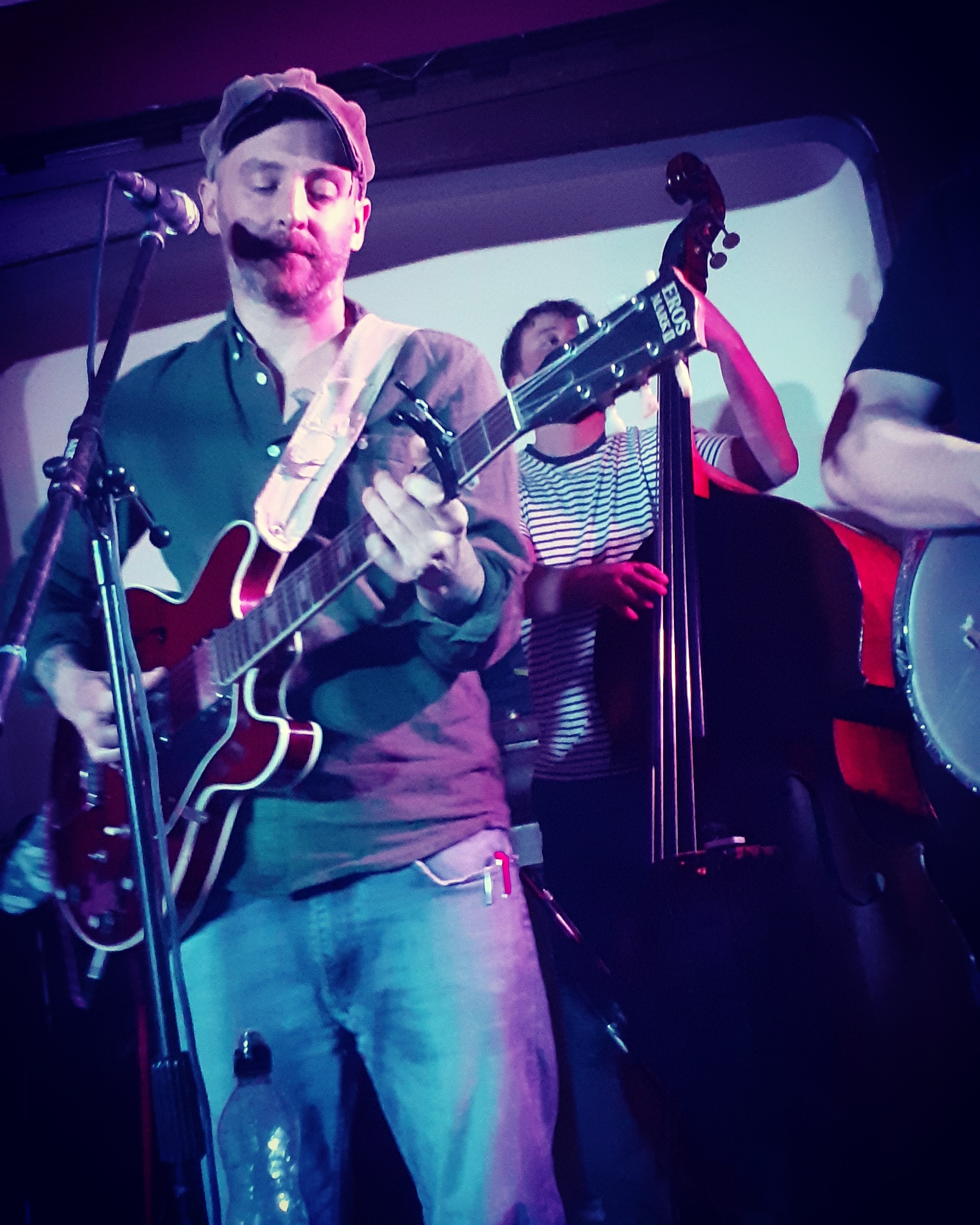 February 29th is an unusual date. A rare date even. I rarely attend gigs on that date nor write reviews. It is fitting therefore that when I do, such a concert is a bit more special than usual & last night's was definitely put together by Wes Finch in that spirit.

A sort of career (to date) compendium, he assembled colleagues & former colleagues to create a substantial dream team, drawing (amongst others) from current collaborators & most of his Dirty Band, for whom it was something of a ten year reunion.

The sense of something extraordinary was set by the invitation to Ellie Gowers to open proceedings with her trademark exquisite singing & playing drawing appreciative sounds from those who had not yet  experienced the sheer impact of her art on live audiences. Readers of my recent reviews will be familiar with the actual song titles from her set, each creating its own high point, whether her covers of "Falcon) by Richard & Mimi Farina or Richard Thompson's "Beeswing" or her own songs such as "Nest", "Against the Tide" (which has attracted so much comment from those downloading ‘Hot Music Live Presents Volume Two') or the sublime "For A While". However a song which is clearly limbering up to be an outstanding single one day "The Sky is on Fire" provided its own talking point. Now into its third substantial lyrical form, Ellie has been compelled by changing global unpleasantnesses to keep evolving it to reflect her disquiet. I wish the world would start behaving a lot better so she can lock it down & record it for you.

Wes' two sets were played with a revolving set of musicians each adding their own talents to a range of songs from various parts of his career (but not all his projects could get a look in given his prolific writing, range of interests & the fact that some were just not suited to last night's format). If I don't watch out, the list of players will swamp the review though. Bradley Blackwell and John Parker alternated on double bass, broadly depending on where in the chronology a track originated. However Gee Vaughan & Ben Haines both played drums on all tracks, brilliantly complementing each other with different parts. Matt Lakey played banjo (and keyboards on one track) while Paul Hartry & Liz Cowley provided backing vocals. Jools Street played his violin. The final element (and one which took me completely by surprise) was a four piece brass section played by Hugh Rashleigh (who also played keyboards on some songs as well as his customary trumpets), James Hopkin (trumpet), Evan Hopkin (trombone) & Jon Lambdon (tuba)

What with the brass section & two drummers, it was easily the loudest Wes gig I've ever had the pleasure to attend: and all this in the living room (admittedly a large living room) of a private house in Coventry. The sound however was so perfectly arranged by Ian Whitehead that it neither overwhelmed the space nor trampled upon the nuances of the songs (and Wes' songs contain so very many nuances)

As Wes is involved in so many other projects, most notably (but not limited to) The Silver Wye & the Mechanicals Band currently, hearing some of the songs played was something of a treat & several times I felt really lucky to be hearing something I'd not heard in too long. The ‘Asthill Grove' (a road not far in fact from where the concert took place)‘Mayflower' & ‘Awena' albums were represented as was the ‘C M Y K' EP and some unreleased material such as "I've Got Your Back" which many might consider his finest work to date. "Wren" "The Pact",  "Southern Cross", "Bowl of Stars", "Jack To Do" "Maurice" "(Ring on the) Riverbed" "Jackie's Stone" and "Just My Luck" all put in most welcome appearances.

Naturally the breadth of material was reflected in a range of emotional pulls upon our states of mind & souls & the flexibility of the pool of musicians allowed everything from the melancholy & reflective sides of Wes' oeuvre to the rousing and uplifting to be played with intensity & truth.

However the overarching feeling of the gig was probably joy. It was just as great to witness such fine musicians enjoying playing & playing together as it was to share in the actual music. It was of course this spirit which made each song resonate so well. I dare say not everyone had had the chance to perform with each other before & it seemed to work for them all judging by their words and expressions. It most certainly worked for us watching.

This was above all I think a celebration of Wes & his work, and if the final ensemble performance was a cover (of The Waterboys' "Fishermans Blues") then its sense of community & good cheer was very well chosen.

Looking forwards already to the next Leap Year as everyone seemed up for meeting up in four years' time. And Ian definitely was recording the whole evening so watch this space on that aspect....

If you are an admirer of the visual artistry of Russell Whitehead or the musical artistry of Wes Finch, or indeed of both as I am, then I'm sure ...
[1 image] END_OF_DOCUMENT_TOKEN_TO_BE_REPLACED

I'm sorry to say that I'd never previously attended one of the summer Sunday afternoon concerts on the Bandstand in Stratford before but ...
[7 images] END_OF_DOCUMENT_TOKEN_TO_BE_REPLACED

Very slightly more than twelve months ago I reported to you on Wes Finch's Leap Year gig: a special event to mark the four yearly occasion & to ...
[1 image] END_OF_DOCUMENT_TOKEN_TO_BE_REPLACED

Somewhat to my surprise, yesterday afternoon I found myself enjoying live music in the actual physical presence of the musicians creating it for the ...
[2 images] END_OF_DOCUMENT_TOKEN_TO_BE_REPLACED

There is some good news for Wes Finch fans awaiting the release of his Leap Year gig live album (as (p)reviewed in this magazine last month) He has ...
[1 image] END_OF_DOCUMENT_TOKEN_TO_BE_REPLACED