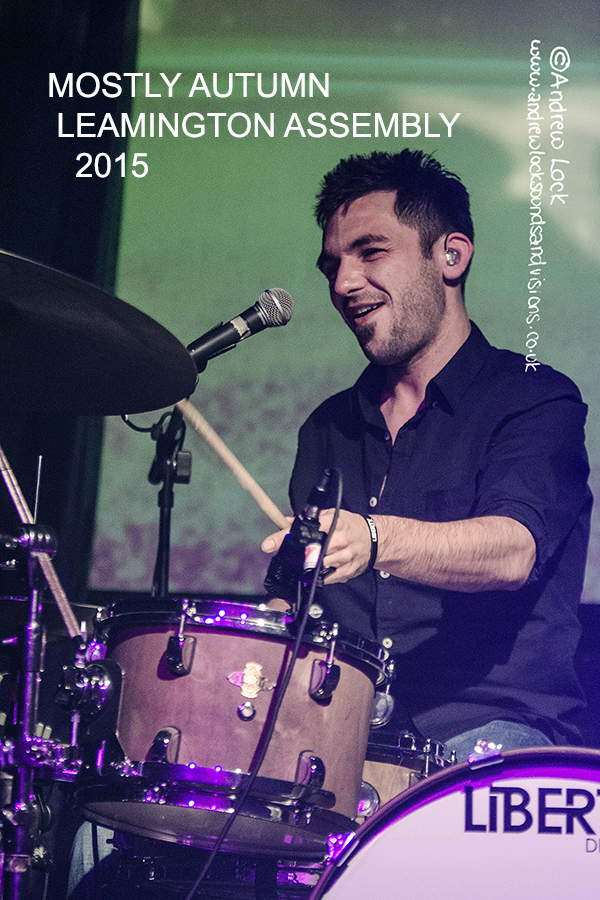 1 of 6
Not many artists mean as much to me as York based rock band Mostly Autumn who make a very welcome return to Leamington for their biggest show of the year, the gig takes place at The Assembly on Sunday 9th October and is a lengthy affair billed as a Mostly Autumn Fest.Doors open at 3.pm with Mostly Autumn opening proceedings with an acoustic set (the first of their three sets of the day) followed by special guests Papillon featuring spectacular violinist and top composer Anna Phoebe.Autumn take the final two slots with firstly a set of music that has influenced the band (including Pink Floyd) and finally a set of their own fabulous numbers.The band played a triumphant equally mammoth show at the Assembly last December which with it being the season to be merry ended in a spectacular Xmas melody but Mostly Autumn and this area go back much further as I will tell you about a little later.I discovered this band which has had such an impact on my life back in 2002 when while flicking through a copy of Classic Rock Magazine I noticed an advert for a rock band playing in my hometown of Leamington Spa (as this was way before the Assembly this was indeed a rare event!), the band Mostly Autumn of course and the venue Robins Well in Victoria Terrace.I still remember vividly that gig in the basement room of the public house in the November of 02 and thinking during the first few minutes of the opening number (which I think was ‘The Return of the King') that this band were A - going to make my music loving life a whole lot better and B- were going to cost me a lot of money (and I was so right on both counts!).Playing their own blend of classic rock with Celtic influences and a at times a touch of heavy prog every single number blew me away, the music, the musicianship and the interaction with the audience, not a great turnout but they way they played it could have been Wembley stadium.Had to chat with them after and they (as they still are now) were charming and very giving of their time, chatting to everyone who wanted to say hi, unfortunately I was not taking gig photos (or writing reviews) back then so have no images to show but still have my signed cd's and dvd (the spending had started!).I have as will not surprise you now seen the band many times (and been lucky enough to photograph and review many shows), including several years at The Cambridge Rock Festival, a show with classical musicians in Wolverhampton, a band convention in the woods of Hampshire and even flying to Glasgow for their support slot for Bryan Adams.The band as I mentioned have not been strangers to this neck of the woods and as well as that historic Robins Well show have performed several times at Cox's Yard in Stratford-Upon-Avon and played at the Leamington Spa Centre as well as performing three times at The Assembly.A very emotional Assembly show was on Friday 2nd April 2010 when in front of a packed house long serving lead vocalist Heather Findlay played her final show with the band before launching a solo career.The role of vocalist was taken by the fabulous Olivia Sparnenn who already performed background vocals with the band as well as a regular lead on one of their rockiest numbers ‘Never the Rainbow'.With Olivia the band have three studio albums under their belt, felt so privileged that my wife and myself had an invite to a small band and friend only playback near York of the first of these the awesome 2010 album ‘Go Well Diamond Heart', (for sure this album has a special place in my heart) and their latest the concept piece ‘Dressed In Voices' has received some of their best ever reviews.Earlier this year the band landed I think one the years best support slots opening for the maestro that is Ritchie Blackmore at his only UK date at the Genting Arena Birmingham and I was gutted that I could not get my hands on a ticked for this sold out show.Mostly Autumn's leader is one of the finest guitarists it has been my pleasure to hear/see in action and Bryan Josh whether rocking out on the up-temp rockers or putting his heart and soul into the emotional numbers is someone anyone who loves rock guitar just has to see live.The band which has a slightly flexible element with some members leaving and returning is always full of quality and the songwriting is always top draw with the lyrics often having a spiritual side.Music wise you can here plenty of Bryan's influences on display such as Floyd's Dave Gilmore and Purple/Rainbows Ritchie Blackmore but they have a sound and style all of their own, full of light and shade with buckets of emotion and being a large band the sound has plenty of strength and depth.There you have a taste of my history with this great band and a little bit about them and very much hope some of you give them a try, they come with my personal guarantee!Tickets available for this massive up-coming show through the Leamington Assembly Web Site www.leamingtonassembly.comif you want to read my reviews and see a few more pics of the band check out my web site www.andrewlocksoundsandvisions.co.ukand check out the bands web sitewww.mostly-autumn.com

The Prog world gets together again next month at The Leamington Assembly when on 11th May Trinity the prog rock music festival returns to its ...
[7 images] END_OF_DOCUMENT_TOKEN_TO_BE_REPLACED

Mostly Autumn live always give value for money but this show (along with two others on the tour) gave even more as they performed two full sets, the ...
[5 images] END_OF_DOCUMENT_TOKEN_TO_BE_REPLACED

One of my favourite bands Mostly Autumn return to the Leamington Assembly on Saturday September 16th for what seems to be coming a regular venue for ...
[3 images] END_OF_DOCUMENT_TOKEN_TO_BE_REPLACED

An epic Assembly show by one of my two favourite bands (luckily for me the other Marillion playing the same venue 3 days later) and Mostly Autumn ...
[9 images] END_OF_DOCUMENT_TOKEN_TO_BE_REPLACED

AMBER RUN have announced an acoustic live show ‘AMBER RUN UNPLUGGED' at The Assembly, Leamington Spa on 10th May 2022 TICKETS ARE ON SALE NOW ...
[1 image] END_OF_DOCUMENT_TOKEN_TO_BE_REPLACED