'Take It From Me' by Izzie Derry 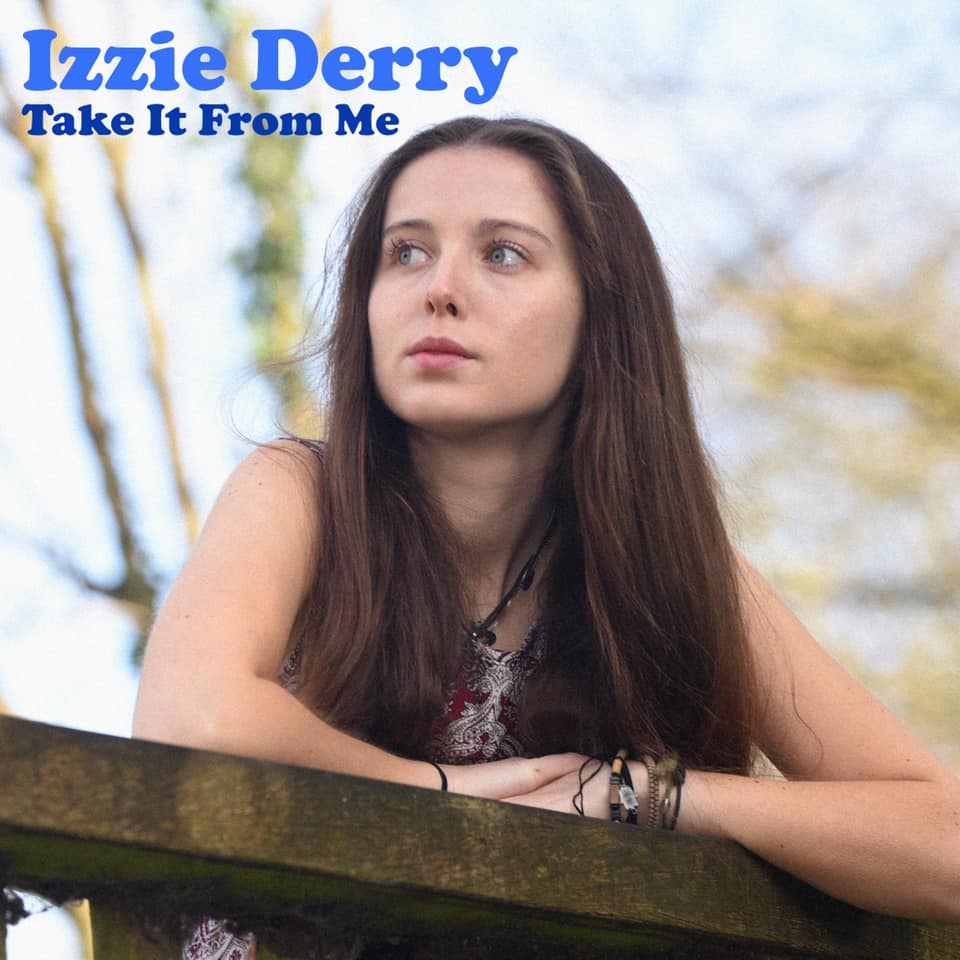 One conundrum I face with reviewing the calibre of artist I tend to focus on (it's an enjoyable challenge really) is how to handle it when people you really admire still manage to exceed even your own sky high expectations?

What words do you use in later pieces when you have already used up your superlatives in earlier ones? I faced this with trying to describe the other week how Titine La Voix's superb voice had got even more superb. Today's challenge is to try to describe to you the new EP from Izzie Derry, ‘Take It From Me' which comes out on February 23rd (you can pre-order it from tomorrow & actually get the title track at that moment) when I raved so much about the material on her ‘Lost At Sea' EP from last April: songs which then & now I believed were her best to date & I certainly wasn't alone in thinking that.

Now I've heard her  four new ones & already other people with really great perspectives, either due to their professional experience or from having followed her career for a long time, are again joining me in dubbing it "her best ever": even better than the last lot & that set the bar very high.

As a sort of transitional route between the two EPs, as I reported last month, Roger Lomas remixed the track "Learn To Grow" from ‘Lost At Sea' as a single, but now, as I also mentioned in the review, we come to a set of tracks recorded from scratch at his studio. Many indicators of artists' progress must be quite subtle to pick up, but in Izzie's case to get the approval of a Grammy winning producer & band like Fairport Convention within a few months of each other, the story this tells is a really clear one. She's rated by those who really know.

Working with the close band of collaborators she has had over the last couple of years,(the lineup being Izzie Derry, vocals & guitar, Jake Morris on bass, Herbie Walker on keyboards & backing vocals, Tom Hammerton on electric guitar & Noah Haines on drums)  the new songs are  "All For Something", "Now I See", "Fire" and "Take It From Me".

If Izzie's musical progression can be rendered graphically as a steep upwards curve, then perhaps her own perceptions of her life in general can also be followed with some clarity via another medium too: her songs.  The vast majority of them are in depth self examinations of herself, her life & her reflections on the world she inhabits: and they are both soul searching & beautifully articulated. If her ‘Goodbye' album was the work of a writer leaving home, ‘Lost At Sea' was a series of musings on her subsequent internal as well as external journey and now we have Chapter Three.

"All For Something" opens the EP with a theme of challenging self doubt (knowing Izzie you won't be surprised to hear that despite her rigorous self analysis, she does locate positives). Lyrically it is her most mature to date with elements of opposing thoughts having to be reconciled & there is an element of accepting the possibility of failure which the pure optimism of earlier songs didn't so readily admit. Musically, the progression is again a big jump forwards: although her work with a band since ‘Goodbye' has brought excellent new textures & nuances to her songs, this one really is a "full" arrangement with Roger's skill building a much more "band" sound, powerful, with hints of modern jazz & full of little touches which add a range of emphases to the various twists & turns of the lyrics.

"Now I See" is maybe Izzie's first really adult romantic song and again self doubt is part of her thinking (we are blessed indeed with wonderful local musicians of skill & sensitivity but you can't help feeling for some of them as people: I've said as much in recent reviews of Joe Dolman & Ollie Bond and now we have another: the line between sensitive & ego free self examination & "beating oneself up" can be a thin one.  May they all enjoy happy times ahead). This one musically is a little closer to her recent types of arrangement, steadily building with instruments joining in to ramp up the emotional clout and again to vary the sonic picture subtly.

"Fire" is Izzie like you have never heard her on record before: this really emotive track has a power of its own & leaves the "folk" box she has been filed in hitherto in her career way behind her (she now refers to herself as "folk rock" on social media): this is a calling card for her as a diverse style performer, being much more jazz/blues. It certainly reminds me how I felt when I heard her with her full band in the summer of 2019: used to her by herself or with a small band, the sheer loudness was a (pleasant) shock as was the sight of them genuinely rocking out. In a way I suppose a parallel would by with Ellie Gowers' recent & equally astonishing "Against the Tide": a break out of constraints type of quantum leap. Like every song on this EP, great as her voice has always been, I think this is the moment for Izzie to sing this song as her vocalisation owes much to her accumulating experience as much as to her innate talent: we are talking ‘Torch Song Izzie' here. It sizzles with emotion & truth and for the first time on the record the emotional & internal doubts are pushed aside for a moment.

The title track, which as I said above can be accessed from the 9th & so is possibly the first song you'll hear,  concludes this stunning set & like "Now I See" it's a builder and the closest to her previous styles in terms of sound & lyrical concerns. I'm going to put myself on the line here (just watch me get it wrong), but it sounds more like the ideas she was exploring on ‘Lost At Sea' so I'm wondering if it was the earliest of these four to be written? However, on the other hand it does speak with a confidence of tone consistent with overcoming the previously expressed self doubts so....

Roger in his inimitable way has taken an existing gem of a talent and added extra polish: his work enhances Izzie's songs & shows them off to their best advantage & never imposes upon them. He knows so much about how to structure the arrangements & you can hear that & his approach to mixing ensures that the songs themselves have an almost indefinably new way of sounding to her previous ones.

Above all of course, this is an EP of progression: five musicians spending more & more time playing together & learning how to do so to greater & greater effect. A writer who is exploring more & more exciting possibilities for expressing herself & whose voice is adapting itself to all of them. A triumph & a major career milestone.

I do like being taken be surprised by music (to be honest I'm not sure I enjoy reviewing music which fails in some way to do so) and I hope I am ...
[1 image] END_OF_DOCUMENT_TOKEN_TO_BE_REPLACED

If you are anything like me, among the myriad challenges to our communities currently being presented, the probable curtailment of live music for ...
[4 images] END_OF_DOCUMENT_TOKEN_TO_BE_REPLACED

It's odd: the more reviews you write, the more patterns emerge.
[1 image] END_OF_DOCUMENT_TOKEN_TO_BE_REPLACED

December 12th is a date many people have possibly been looking forwards to or dreading for various reasons.
[1 image] END_OF_DOCUMENT_TOKEN_TO_BE_REPLACED

I find myself here writing a review which I had never anticipated.
[1 image] END_OF_DOCUMENT_TOKEN_TO_BE_REPLACED

Last night was one for the connoisseurs: a whole evening of nothing but top class original music written from personal perspectives & played with ...
[2 images] END_OF_DOCUMENT_TOKEN_TO_BE_REPLACED