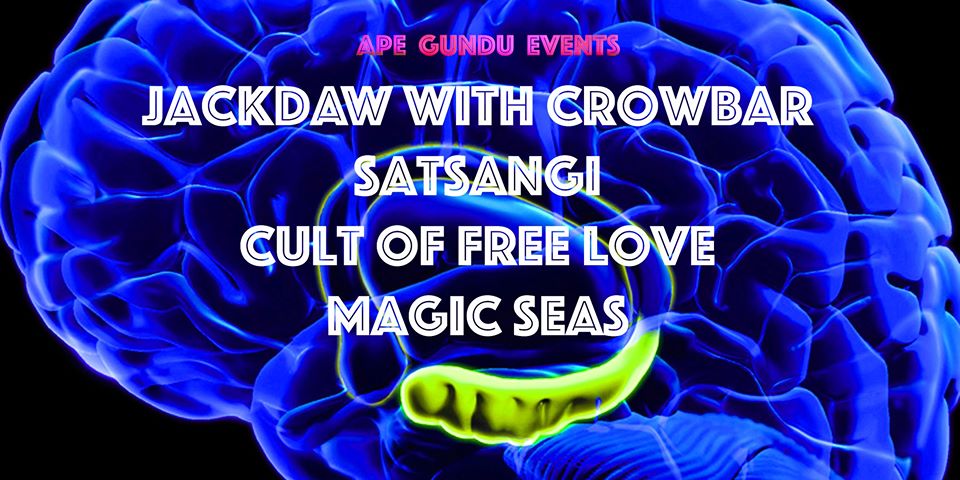 Some excellent news for lovers of music which dares to be a bit different. After the closure of the Zephyr Lounge, the mighty APE nights organised by Johnny Satsangi have been more nomadic. After their Christmas 2019 visit to The Tin, for their first night of 2020 they will be at St Patrick's Irish Club in Leamington on March 7th

In the words of Johnny himself (who better?)

"We are introducing 2 fantastic bands to the area, both vanguards of the re-emerging psychedelic scene.

At St Patrick's Club there will PSYCHEDELIC LUSCIOUSNESS
The upstairs room is the spaceship and we will journey together!"

JACKDAW WITH CROWBAR
"The best thing to come out of Leamington since The Grand Union Canal." Stewart Lee

SATSANGI
"She's a star, I want to work with her." Tricky

THE CULT OF FREE LOVE
"The Cult of Free Love give psych's early spirit a transcendental reboot. One of the grandest blends of psych and electronica for many a moon." Kris Needs, Electronic Sound

Press release for ‘VISIONS' single:
THE CULT OF FREE LOVE The Cult of Free Love are from the mystical landscape of North Wales. This 12" is the first release since 2016's critically acclaimed debut album ‘Love Revolution' and represents the second coming of The Cult. Relatively little is known about the cult or it's members, but it has long been suspected to be the work of the infamous Northern Star collective.

MAGIC SEAS
Hailing from Chelmesford, MAGIC SEAS are brothers James and John Prudence. This 12" represents their debut appearance on vinyl. Following their previous two singles, the band once again showcase their shimmering dream-pop on two brand new recordings which were co-produced and mixed by RIDE frontman Mark Gardener at his OX4 studios in Oxford.

I reviewed (back in November) the most recent single from Satsangi, "World Falling Down" and mentioned a little bit at that time about their ...
[1 image] END_OF_DOCUMENT_TOKEN_TO_BE_REPLACED

Fresh out from Satsangi is "World Falling Down", (their first since they raided their own vaults for the "Don't Want Anything But More" single ...
[1 image] END_OF_DOCUMENT_TOKEN_TO_BE_REPLACED

During these turgid times when there is a distinct danger of every successive day seeming like its predecessor, it's helpful to be surprised now ...
[1 image] END_OF_DOCUMENT_TOKEN_TO_BE_REPLACED

Satsangi, never a band to shirk a challenge nor to be meekly led by fate nor wander aimlessly down roads many others have trodden previously, seem to ...
[1 image] END_OF_DOCUMENT_TOKEN_TO_BE_REPLACED

Well life under lockdown continues to evolve doesn't it: even, or perhaps especially, our musical life.
[1 image] END_OF_DOCUMENT_TOKEN_TO_BE_REPLACED

I have often written about the wonderful, in fact the weird, thought provoking & wonderful evenings Johnny Satsangi puts on at the Zephyr Lounge ...
[1 image] END_OF_DOCUMENT_TOKEN_TO_BE_REPLACED