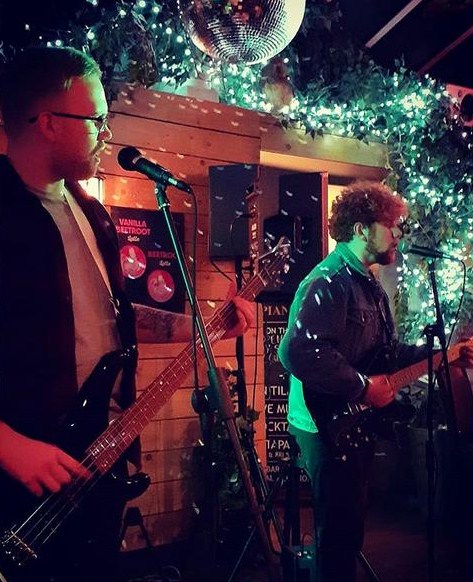 It is always a challenge finding the right words for any review: trying to describe one medium in another is itself tricky & then if you review certain much admired artists regularly, then it can be hard finding new ways to capture, or try to capture, their essential qualities each time.

That however becomes even more of an issue with artists like Brass Hip Flask whose essence is elusive. I don't particularly mean their style nor core qualities: as readers of my previous reviews will know, they have great integrity to the truth of authentic blues & don't swerve from that aspect of their mission.

However beyond that, the bare facts of the band change with every review: they don't necessarily sound & play the same nor does the live or studio lineup seem identical two reviews running.

I got excited on the 7th of this month by their latest single "Head Under Water" (which I was really pleased that I heard live for the first time at Leif in Leamington last evening) and that track featured core BHF members Stuart Mckissock and Callum Mckissock collaborating with Juan Novella of White Rat Cult. Previous single & live reviews mentioned drummer Anna Harris.

Now, Brass Hip Flask consist (or rather they did last night) of Stuart still playing guitar & singing and Callum but now with added George Asquith. However that is far from the whole story. Callum was playing bass last time I saw them live. Though I have also seen him play guitar. Last night he was on drums & George played bass, apart from one number when George played drums & Callum bass. Or the ones George played solo on acoustic guitar. Sorry if this is confusing but I am trying to keep it simple.

The next factor is that Callum will not be playing with the band again due to a most unfortunate health issue which I am sure everyone at "Hot Music Live" wishes him the best with, apart from the launch of the Brass Hip Flask album in April which will be his final live gig with them. I look forward to both reviewing the album & gig. After that, BHF will be George & Stuart and will have a substantial new repertoire of songs written by them, so expect more reviews detailing yet more changes & evolutions.

The gig itself was played at substantially lower a decibel rating than the band normally adopt and accordingly the setlist while remaining familiar (I'm told the fingers also hit the same notes as usual too) was different as they took the opportunity to adopt a very groove centred approach to excellent effect, bringing out new aspects of the songs & in many cases wringing even more emotion out of them by so doing. Several numbers were explored in greater detail through extended jam sections & with a few exceptions, the guitar sound was a rather Chris Isaak one rather than say the Ernie Isley effects loaded one of "Head Under Water".

I have noticed (but probably not noted in writing) a strength in the band of writing rather doom laden blues in the Nick Cave tradition & several of these were played very successfully, although interestingly a number of older BHF songs whose lyrics were as dark as the music have departed the set for the psychological well being of band members: in fact if I were attempting to describe a timeline of how the group's songs are evolving from their start into the new era, it might be represented by a lightening of lyrical tone but not necessarily musical.

George as noted played three of his own songs solo at the start of the second set: the first being a startling a cappella one with plenty of howls & boot stamping. It certainly caught my attention & I think traumatised a few others in the bar.... His bass playing certainly contributed much to the groove approach on the night & I was interested how his dynamic, low slung style incorporated a lot of Lemmy type chorded playing which gave a hard rock element: the two sitting together well.

I'm looking forward, as I say, to the culmination of "Callum era" Brass Hip Flask in April with his swansong & the release of the material he has written. Look out too, even in the interim, for new look BHF playing live as I think I can confidently predict surprises every time.

There have been more "blues revivals" than there are blues standards (possibly.
[1 image] END_OF_DOCUMENT_TOKEN_TO_BE_REPLACED

"The Mountain" by Brass Hip Flask

Do you like your blues authentic & raw? I do.
[1 image] END_OF_DOCUMENT_TOKEN_TO_BE_REPLACED