"It's Christmas" by Dave Pepper 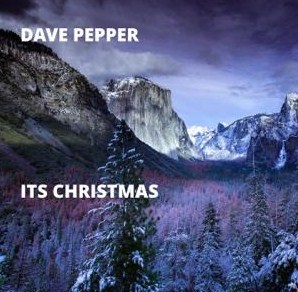 In terms of the tracks on ‘Hot Music Live Presents Volume One', some were great tracks from today & others rare & unreleased gems from some of the best loved artists in our past. One of the latter I was most pleased to be able to include was the hitherto unreleased   "Asylum" by the X-Certs: one of the most influential local bands of the post punk era. What a great song it is too & fully demonstrates the esteem in which they are held (check it out for free at https://hotmusiclivepresents.bandcamp.com/album/hot-music-live-presents-volume-one)

Unfortunately at this point, the temptation in reviewing anything by X-Cert legend Dave Pepper leads directly into a long list of the great bands he graced: which while true & honest, is in fact a long list & delays our arrival at the current single.  I'll cite a few of the best known ones as examples:  The Ramrods, Major 5, I, Blitzkrieg Zone (later Blitzkrieg Zone 2020: are they due a revival in the New Year I wonder?) and the Courtiers of Fashion

After forming or appearing in what seemed like most local bands, Dave founded a completely new & long musical career in the USA, returned to live on a narrowboat in various local locations during which he played frequently in Warwickshire again & now his restless energy has led him to Spain where once again he has built a following based on his talent & boundless enthusiasm for music, regardless of his own back catalogue (check out his flamenco skills!).

He has just released a Christmas single entitled "It's Christmas". I have followed Dave & his career for many years & honestly can't remember him having a Christmas song before (though his career is so prolific he might well have done & I missed it). As you might expect from Dave, the composition & execution are beautifully crafted. Though a skilled writer & player (mainly on the guitar but he's been in bands as a keyboard player), Dave has never lost the touch of immediacy in his work (you ought to see him live!). Listening to "It's Christmas" you wonder why Dave isn't filthy rich as the composer of commercial songs for others as is so prevalent these days, as he hits the bull with a catchy number which is, at least to my ears, a nod to the golden age of Christmas singles of the early 70s before the tradition ran out of steam & variations. In fact it might even be a sort of 2019 tribute to the likes of Roy Wood with its "big" layered sound creating the festive vibe yet wisely avoiding most of Roy's instruments in favour of a more contemporary take. Sort of "retro meets modern" which Dave has the ability & experience to pull off.

In keeping with his cosmopolitan career, the song is selling well in places like China and  Japan (again, I have no recollection of his living nor working in either: though I may of course have missed it) and I can't say I'm surprised as it certainly has that universal message (not that one imagines the festival to be that big in those countries): looks like we have an international hit coming out of Coventry & Warwickshire & from a "Hot Music Live Presents" artist adds the icing to the Christmas cake.

Following the raunch of his most recent release from earlier in the month, "Rub Rub Grind", Dave Pepper is back with his new single "Don't Stop.
[1 image] END_OF_DOCUMENT_TOKEN_TO_BE_REPLACED

I got pretty excited in these pages recently as Dave Pepper turned the clock right back on his sound with that excellent song "I Need More Time": ...
[1 image] END_OF_DOCUMENT_TOKEN_TO_BE_REPLACED

Out today from Dave Pepper is a new song called "I Need More Time" .
[1 image] END_OF_DOCUMENT_TOKEN_TO_BE_REPLACED

The latest release from Dave Pepper is called "The Calm" and is now available for you too to enjoy via this link: https://davepepper1.
[1 image] END_OF_DOCUMENT_TOKEN_TO_BE_REPLACED

As usual, starting a Dave Pepper review with a list of his musical projects & genres mastered would in itself make an article too long to hold your ...
[1 image] END_OF_DOCUMENT_TOKEN_TO_BE_REPLACED

Given the overwhelming feeling of claustrophobia engendered by the current situation, it is a corrective to share evidence that we are not all hemmed ...
[1 image] END_OF_DOCUMENT_TOKEN_TO_BE_REPLACED