Tigermask live at The Town House 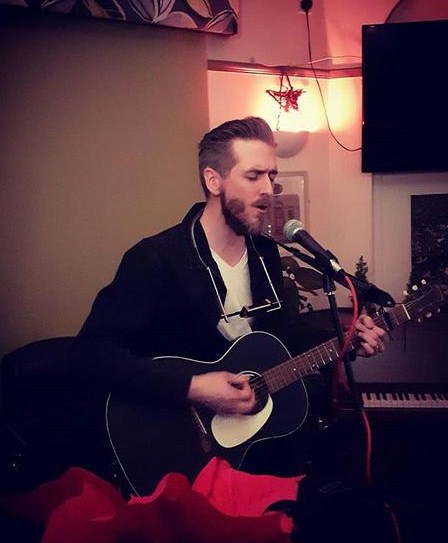 I have to admit from the start that I found writing a review which captures the essence of Tigermask adequately, having seen him play at the Town House in Leamington last night, more of a challenge than for most of my articles for the magazine. His style is elusive: too slippery to easily pin down. I pondered long & hard during his two sets, looking for clues. I discussed the problem with other audience members & put the question to the artist himself: twice. This all helped, but only to an extent & so once again my advice is to go & see him yourselves to form your own opinions. You will probably do better than me...

I was advised by Jonny Roden of the Folly Brothers to check Tigermask out some months ago. I followed this advice but only caught his second set on that occasion having been to another gig at the far side of Leamington first. I enjoyed what I heard, was intrigued & felt then, as now, that writing a review was going to be difficult so have left it until I'd heard a full concert. Again I really enjoyed his music, but it was no easier to describe after twice the material than the first time. It's at moments like this that I am reminded of the helpful thought that "talking about music is like dancing about architecture" and realise that my words can never properly encapsulate the music I hear, though out of respect for the artists, I ought to try my hardest.

He describes himself as "subversive folk cinematic" and certainly his lyrics are full of images & ideas, often on quite large canvasses, but not excluding the intimate in scale either. His demeanour is downbeat (he also admits to "introversion"), often against very lively if not assertive strumming, setting up effective dynamic contrasts. Though melodies crop up repeatedly, it is interesting how often his songs possess spines within them: either through deliberate compression of the vocal line to the point of a monotone or by drones within the guitar part: both of which add both to the dynamics & the sense of darkness.

The covers, instrumentation & lyrics would seem to give an easy route to me in likening him to Bob Dylan: but since he sounds absolutely nothing like him, such a path leads in the wrong direction.

It is worth noting that Tigermask, though relatively new to me, is really popular: on both occasions the venue was full, with most of the audience clearly people who had come to see him. There was a great deal of applause & loud approbation (the evening was weighted with the most upbeat material appearing later) yet one regular gig goer at the venue whose opinion I solicited noted how chilled she found the whole atmosphere...

This is a most interesting & unusual musician whom I hope you will enjoy, but one whose songs set you challenges (that is a compliment) and that alone lifts him far above the mundane.

As well as hopefully catching Tigermask live, you can hear him on ‘Ovum' which comes with a 26 page booklet of original artwork and lyrics.

When I wrote last month about the latest single from Tigermask, "Mirtazapine", I told you quite a lot about its parent album ‘Cocoon' which in ...
[1 image] END_OF_DOCUMENT_TOKEN_TO_BE_REPLACED

It has been a while since we were able to feature Tigermask in the magazine (and in the interim, his standalone track "Timeless" appeared on ‘Hot ...
[1 image] END_OF_DOCUMENT_TOKEN_TO_BE_REPLACED

I expect we all agree that music can actually do things to us & for us: improve our mood & morale, lift our spirits, transform our psyches.
[2 images] END_OF_DOCUMENT_TOKEN_TO_BE_REPLACED

Watching TwoManTing last night at the Town House in Leamington, one of my immediate thoughts was "it's been too long" since I last saw them live.
[1 image] END_OF_DOCUMENT_TOKEN_TO_BE_REPLACED