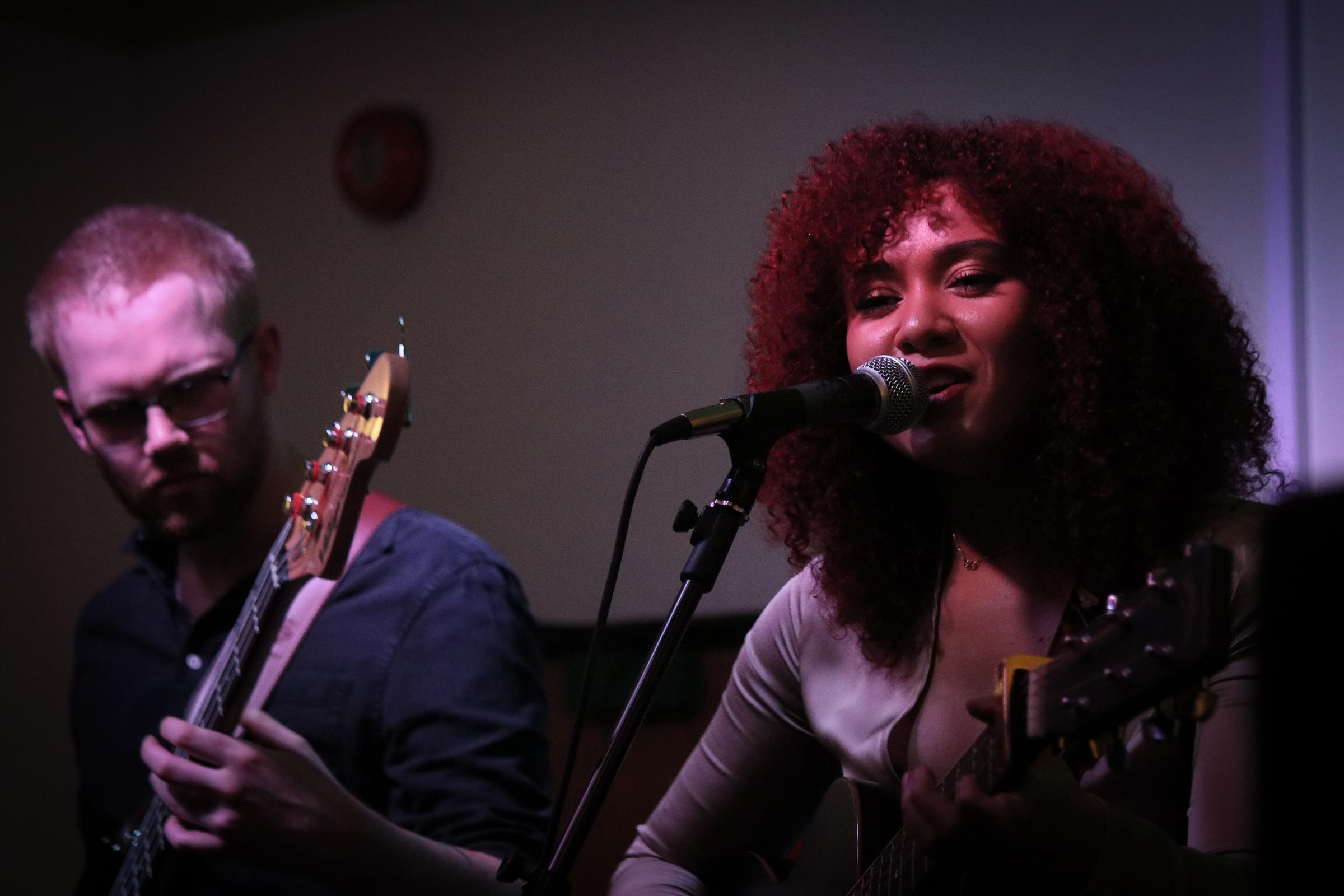 What a fiesta of an evening on Friday at St Patrick's Club in Leamington.

Organised by Taylor-Louise as a launch evening for her "Black Heart" EP it also was a birthday celebration for her & it served too as an evening for raising awareness of mental health issues & fund raising for the local MIND: this tells you a lot about her values & of course skills in setting up a packed evening with three mindbogglingly superb acts, food & the above activity.

In fact the musical side could almost have doubled as a "Hot Music Live Presents" evening too as Taylor-Louise & her guests Chalk Drawings both appear on "Volume One" and opening act Evergreen on "Volume Two" (as of course does Naomi Beth who was helping out on the evening though not performing).

Opening the night with gusto, the fast rising Evergreen set a very high bar for the following artists. The core quartet of Rikki Hansel on guitar, harmonica and vocals, Tyron Hansel on bass & vocals, Noah Dobbie on guitar, ukulele and vocals & Erin O'Rourke who plays guitar (& on other occasions the bass) and is the fourth singer in their multilayered harmonies were joined by Jeremy Walker on drums: as indeed they are on the "Sunny Lady" single which appears on "Hot Music Live Presents 2" and he plays on the EP they are currently recording. His dynamic playing, which adds almost another melodic element with his imaginative tom work drives their powerful yet subtle playing into yet another dimension & will really aid them in larger venues & the festival appearances they hopefully will play in 2020. It was one interesting indicator of the consequences of the evolved sound that Rikki switched to an electric guitar for some numbers.

Next up were the ever popular Chalk Drawings, though reduced on this occasion to a trio of Simon Dagger (vocals & guitar) Kev Stanley (drums) and Dan Holford (guitar) as bassplayer Rob Lewis was unable to be present. Given the number of funky songs they play, it's incredible how they coped without a bass, but they surely did, giving us their usual full energy & full emotion commitment with a range of crowd pleasers such as "Halcyon Days" and "Rag & Bone". It had been quite a while since I'd last seen them play & I do hope to see more of them in 2020.

Finally the star of the show came on, aided for many (but not all) songs by a band comprising Tom Graham on drums, Sean Clarke  (whom you may know from Courthouse) on lead guitar and Callum Mckissock on bass, whom you might also know from Godiva Festival 2019 Main Stage act Brass Hip Flask.

As with the other artists tonight, Taylor-Louise shone & she thrilled. It is most interesting how this really self aware, candid & articulate musician spoke of her own mental health issues: on one hand she utterly owns her stage & had no qualms about following such high quality support acts, yet she told us how off stage she suffers anxieties & would much rather be on the stage than attending gigs as an audience member, which she finds difficult. It is rather humbling to hear someone able to share such things.

I once commented in the magazine that she seemed to be creating new material faster than she could record & release it (a reflection which she has been sufficiently taken with to put it on her Facebook page banner) and in true Taylor-Louise style, she didn't let us down with her signature setlist of rarely played old songs, very recent ones, favourites & of course her customary debut of a really new one. Most were played with the band giving them plenty of power & panache, yet mid set the others took a breather while she played several solo & she commanded the room with these just as surely as she did with her full lineup.

Naturally, the title track of the EP was the highlight of the evening. I hope you have read in "Hot Music Live" my reviews of previous singles taken from it:"Gone" (in June) & "Generation Now" (May), both of which naturally were also played. Nevertheless, when I first heard these songs played live some months ago, it was "Black Heart" which really caught my attention & for which I have been waiting. I really believe it can do well for her & introduce her music to an ever wider audience. Although her writing just gets better & better, this song really does stand out as being something extra special. What a privilege to have been there. Thank you Taylor-Louise & all those involved in an evening unlike others.

It's been quite a while since I had the pleasure of reviewing a Taylor-Louise release: in fact it was about eighteen months ago when the title ...
[1 image] END_OF_DOCUMENT_TOKEN_TO_BE_REPLACED

If you are counting, you'll have spotted that the new single "Gone" is the third single to be released from Taylor-Louise's stunning "Black ...
[1 image] END_OF_DOCUMENT_TOKEN_TO_BE_REPLACED

When is "easy listening" not easy listening?Possibly when it is one of those quite rare songwriting approaches where the composer deliberately ...
[1 image] END_OF_DOCUMENT_TOKEN_TO_BE_REPLACED

I don't usually review artists' websites (in fact I don't think I ever have before?) but why not? They are a crucial method of keeping ...
[1 image] END_OF_DOCUMENT_TOKEN_TO_BE_REPLACED