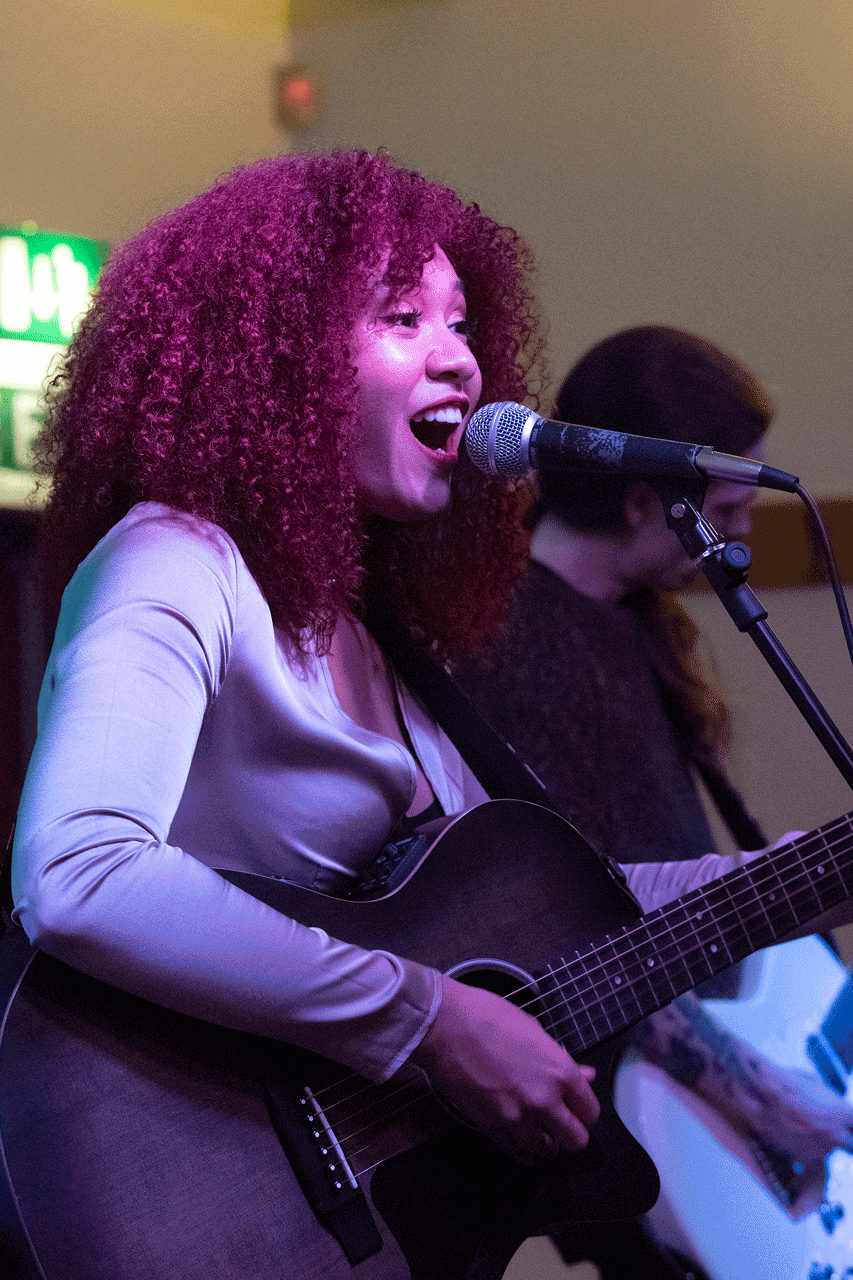 She began writing songs, from the age of 12, from experiences she'd had from difficult times of acceptance and her ability to read situations.

And after just a year of performing live, she began recording and released her debut EP ‘jealous eyes', which led on to the second release ‘Take a Look at me Now'. She launched her third EP ‘Broken Reflection' in October 2017 and shortly after began working closely with a London based studio perfecting her artistry releasing the single "Twenty-Three" in 2018, prior to this latest EP 'Black Heart'.

Taylor-Louise has achieved many successes including BBC Coventry &Warwickshire Band of the month, and Spotify's Release Radar for new releases.

The launch night included two support bands (Evergreen and Chalk Drawings) with lots of other local performers in the audience, including Levi Washington.

First up on stage was Evergreen who are a throwback to the 1960s and 1970s with their guitar and ukulele and close harmonies, in the style of Crosbie, Stills, Nash & young or Fleetwood Mac.

Even though they have been together less than one year they won the "Godiva Calling" competition at the Coventry event so they could play on the Main Stage.

For this evening's event they played a selection of their songs including ‘You got to Move', ‘Walking Disaster', ‘Spare Change', ‘Midnight Run', ‘Confusion (slight paranoia)' and finished with their newly released single ‘Sunny Lady'. They are in the middle of recording an EP with 14 records at their studio in Leamington Spa which should be out in January 2020.

After a short break for delicious and spicy food from local outlet Millennium Balti, up on stage came Chalk Drawings.

They were playing as a three-piece band with Kev Stanley (drums), Dan Holford (guitar) and Simon Dagger (guitar and vocals). As a band they have been going for 6 years and brought out a well-received album Grand Union in 2017.

They played a set of both their own material as well as some well-known covers with lead singer Simon giving his all and drummer Kev showing off with his red and green lit drum sticks. Their own songs included ‘Blood, Sweat & tears' and ‘Halcyon Days', ‘Right as Rain' and ‘Drip Dry'. The covers included 'Valerie' (The Zutons), ‘Umbrella' (Rihanna) and ‘Zephyr Song' (Red Hot chilli Peppers).

With the lighting now set the audience was ready for the main event of the evening with the launch of Taylor-Louise's new EP ‘Black Heart'.

For the first third (and last third) of the event, she was joined on stage by her band consisting of Callum McKissock (bass), Sean Clarke (guitar) and Thomas Graham (drums). Taylor-Louise was singing and playing acoustic guitar.

The first section included two songs from the new EP ‘Blessed with a Curse' and ‘Generation Now' along with ‘Bring me to Life', ‘Just to be Alive' and ‘Put into Words'.

Taylor-Louise with her band put out a powerful sound with passionate vocals to these songs.

The middle section was Taylor-Louise on her on singing with her guitar and included a dedication to her very supportive Mum Melanie with ‘Mama Told Me' along with ‘Air to Breathe' and ‘Ink my Skin' before the band joined her again for new songs from her EP. This included recent single ‘Twenty Three' with its powerful and reflective vocals, ‘Gone' and the EP title track ‘Black Heart'. After tremendous applause, from the St. Patricks Irish Club crowd, at the end of her set she finished with an encore with ‘More to Us'.

Taylor-Louise's next gig is at Temperence in Leamington Spa on 15th February 2020, though she will continue to write new material, which she will try out at gigs to an appreciative audience.

It's been quite a while since I had the pleasure of reviewing a Taylor-Louise release: in fact it was about eighteen months ago when the title ...
[1 image] END_OF_DOCUMENT_TOKEN_TO_BE_REPLACED

What a fiesta of an evening on Friday at St Patrick's Club in Leamington.
[3 images] END_OF_DOCUMENT_TOKEN_TO_BE_REPLACED

If you are counting, you'll have spotted that the new single "Gone" is the third single to be released from Taylor-Louise's stunning "Black ...
[1 image] END_OF_DOCUMENT_TOKEN_TO_BE_REPLACED

When is "easy listening" not easy listening?Possibly when it is one of those quite rare songwriting approaches where the composer deliberately ...
[1 image] END_OF_DOCUMENT_TOKEN_TO_BE_REPLACED

I don't usually review artists' websites (in fact I don't think I ever have before?) but why not? They are a crucial method of keeping ...
[1 image] END_OF_DOCUMENT_TOKEN_TO_BE_REPLACED