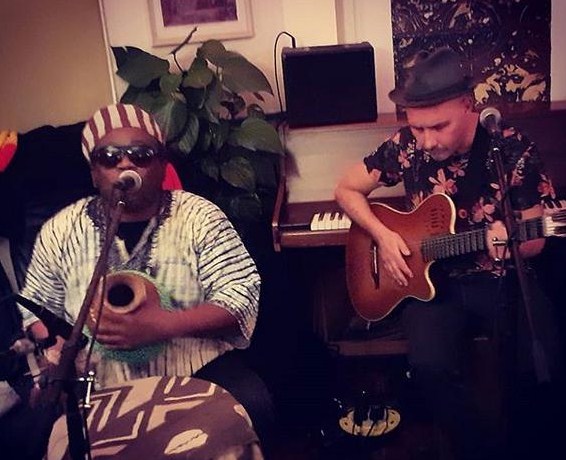 Watching TwoManTing last night at the Town House in Leamington, one of my immediate thoughts was "it's been too long" since I last saw them live..... What a pleasure it was. Obviously if you get successful, you end up playing at all sorts of places far & wide & who can begrudge guitarist Jon Lewis & drummer/percussionist Jah-man Aggrey the width of their appeal. Still, it was good to have them back & the full audience showed I was far from the only one.

They were in excellent form of course but other thoughts which spun through my mind like the bewitching rhythms my ears were hearing included the appreciation not just of their technical skills (mighty as they are) but their taste & discretion. Songs often appeared deceptively simple. There was usually much space left in them (always a plus with me & a stark contrast to those much less authentic "world music" acts who seem to think that having large lineups with everyone playing frenetically on top of each other is cool...) and above all both artists demonstrate a beautiful "feel" for their instruments. A lot of guitarists one comes across are touted, many deservedly so for technical proficiency & of course there are many styles they play in, but I can't think of anyone of this particular style who plays with the finesse & touch of Jon. Though what the style is can be more elusive to describe. I suppose jazz must enter the mix, but the predominant element is definitely African highlife plus dub stylings at times. And all on one acoustic.

The songs themselves were predominantly their own, with the customary well crafted & directed lyrics, many from the current ‘Rhymes with Orange' album (check it out) but Clash fans were very well catered for with the covers of "Armagideon Time" & "Guns of Brixton".

Unsurprisingly, dancing broke out & regular Town House concert attendees The Goose & The Trout when asked expressed their enjoyment: a seal of approval. The latter reported to me that it wasn't what she was expecting, so hopefully TwoManTing not only pleased their existing fans but gained some new ones.

Personally I do hope that not so long elapses again between my seeing them live.

When I reviewed the current TwoManTing single "Gbangbaode" for you last week & at the end advised you of their upcoming live album, I really ...
[1 image] END_OF_DOCUMENT_TOKEN_TO_BE_REPLACED

I last reviewed TwoManTing for this magazine in a live context back last November & I trust you'll recollect my sense of enjoyment of that ...
[1 image] END_OF_DOCUMENT_TOKEN_TO_BE_REPLACED

I expect we all agree that music can actually do things to us & for us: improve our mood & morale, lift our spirits, transform our psyches.
[2 images] END_OF_DOCUMENT_TOKEN_TO_BE_REPLACED

I have to admit from the start that I found writing a review which captures the essence of Tigermask adequately, having seen him play at the Town ...
[1 image] END_OF_DOCUMENT_TOKEN_TO_BE_REPLACED