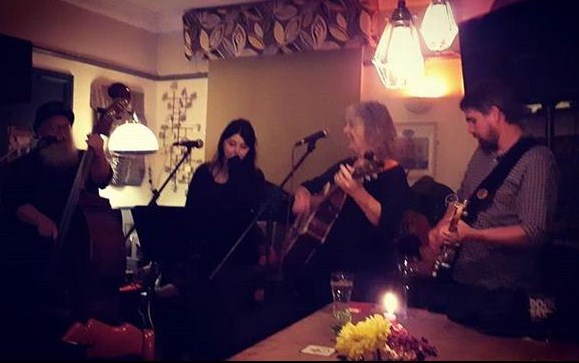 Although I have seen them play before, and greatly enjoyed their performances, I have not actually ever given them a full review for some reason (I have referred to them in the context of festivals only), so I take pleasure in being able to tell you about the Hatstand Band's gig at the Town House in Leamington last evening.

This very flexible group, based upon a core of Kate Vassalos on guitar & Keith Nickless on double bass and harmonica operate with a bewildering combination of lineups including often very impromptu guests. On this occasion they were a six piece with regular cajon player Stix, frequent guest Sophia Vassalos on vocals (much the same core operate on other occasions as Sophia's band), a lead (electric) guitarist & one of those guests, Bob on bodhran & spoons.

I had to check with Kate regarding the mixture of originals and covers since a high proportion of the songs were not known to me: this indeed is part of their great strength as their own songs are hard to distinguish from the covers so seamlessly do they fit it among deliberately chosen fairly obscure "dark Americana" cover versions (though a few I recognised, not least the rousing & audience pleasing version of Marc Cohn's "Walking in Memphis").

The set is amazingly eclectic to be honest with songs which might be fitted into various categories: folk, blues, soul, latin and even one Russian sounding one, though their "dark Americana" self description is apt given the numbers of deaths in the lyrics and the devil pops up in virtually every single song (whisky does quite often too). Their version of "Banks of the Ohio' is even arranged to better bring out the morbid lyrics better than the usual & less appropriate poppy upbeat versions do.

Just as the setlist is eclectic, so really is the sound. The band is a wonderful variety of ages & experiences, each of which brings something different to the mix (Fairies Band vocalist Tinky: check them out on ‘Hot Music Live Presents Volume One', was present & asking her reaction to the band, this was the point she wanted me particularly to make in this review). And I racked my brains but could not remember ever seeing a band featuring both a cajon & bodrhan previously. Particularly as the evening wore on & the songs got more and more rousing, the harmonies three singers (Keith, Kate & Sophia) were able to create became ever more stunning.

So how did they go down? Very well is the answer. There may have been multiple deceases & demons but the songs themselves prove who has the best tunes & are played with a great deal of love. That alone is one major reason why I too appreciated their performance & wanted to review them. As I (too) often say in my pieces, I tend only to respond to honesty in performance & to musicians who clearly enjoy what they are playing & that is the tipping point for whether I feel I want to write about them.  I felt their commitment to the music & I'm sure the enthusiastic audience did too. It's something you don't really need (or cannot) put into words. And thankfully Keith's bass didn't explode as it spectacularly did when I saw them at the Godiva Festival once.

There have been some great live acts on at this venue in recent weeks: before the Hatstand Band I greatly enjoyed seeing Doc Brown & Tile Hill Billy (Wes Finch & Jools Street) and the Hansel Brothers/Evergreen: three great evenings with the pub really buzzing in response to the acts: an excellent atmosphere for live, good natured music with patrons who appreciate it. Look out for more with the Folly Brothers coming up soon too.

I expect we all agree that music can actually do things to us & for us: improve our mood & morale, lift our spirits, transform our psyches.
[2 images] END_OF_DOCUMENT_TOKEN_TO_BE_REPLACED

I have to admit from the start that I found writing a review which captures the essence of Tigermask adequately, having seen him play at the Town ...
[1 image] END_OF_DOCUMENT_TOKEN_TO_BE_REPLACED