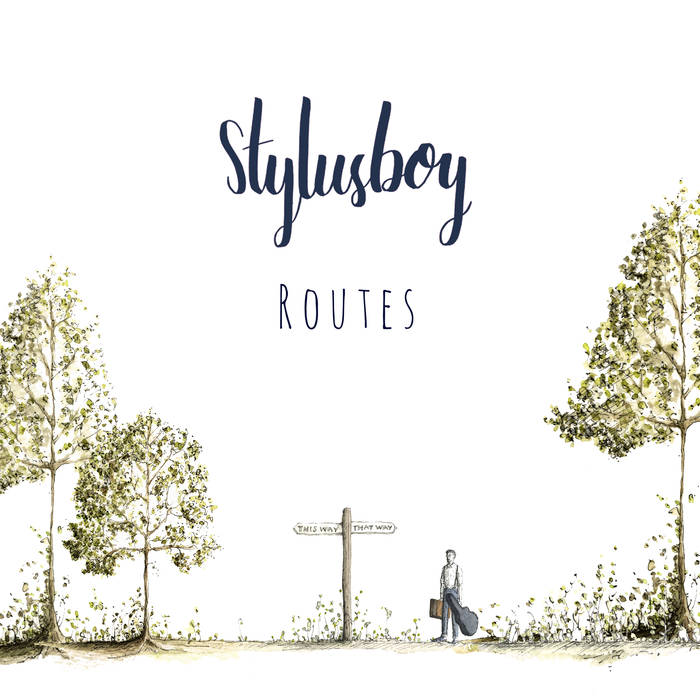 I've said it before, but reviewing for "Hot Music Live" is a real privilege in so many ways. One of which is getting to hear the finest material, often a little bit before it becomes part of the public playlist. In this instance, I am going to give you my response to one of the most eagerly awaited releases of 2019: Stylusboy's new album ‘Routes' which will be released on September 27th. I'll stick my neck out here & although I don't myself  issue an "Album of the Year" list, I can see why those who do may go for the one for 2019....

If you think that this means that I've been listening to loads of his new songs which you haven't had the chance to & thus feel a bit hard done by, I think that this is not necessarily the case as he has been playing much of the album live (no doubt honing it) for some time now, so if you've been seeing him live, you'll have already heard some tracks, if you've not, you've missed some excellent gigs...

I had better declare something of an interest here: I admire & enjoy his work tremendously (I'm far from the only one: Stylusboy is something of a musician's musician, a connoisseur's choice if you like, held in very high esteem in music circles in Coventry & Warwickshire & beyond). If you think that this means I'm going to give ‘Routes' a very favourable review then you're right of course (though I do hope you read on for the details), but that, like it or not, is my reviewing credo if you've not already worked it out from previous ones. I review music I really like & feel I can say something positive about & if I don't care for something or it doesn't ring my own bell, it's best someone else who may appreciate more than I do has their shot: only this morning I demurred on reviewing something for example.

As I said, you probably know some of these songs already, so that's where I'll start if you don't mind.   "For The Souls of my Brothers" has for ages been, for me, his signature song & if you look back at my reviews of Stylusboy gigs, I am sure I've always mentioned it as a highlight. An extraordinarily tender piece of songwriting, based on his own family history, it is far the best Coventry Blitz song ever written and probably the best Coventry specific song too (I'm not keen on getting into a "Ghost Town" debate on this assertion: to me that song has a really strong applicability outside Coventry). "Shivers down the spine" time & probably will always be the highlight of his gigs...... So glad it has now appeared on ‘Routes'.

If that track has established an especial place in his repertoire, another song has challenged it in my personal opinion as one I especially like hearing live since first I heard it and as   "Out Upon The Ocean" has already been released as the title track of an EP I reviewed on May 10th, I refer you to my comments in that article: pausing only to note that I love it still more with the passing of the intervening months. I also hold my (reviewing) hands up &  apologise for my earlier assumption that the subject matter of this song was expressed in purely metaphorical terms.... its creator informs me that it is in fact the narrative you hear & I had read way too much into it... Sorry. This song of course features the prominent vocal harmonies of Holly Hewitt as do many of the other ‘Routes' songs to their great benefit. The two voices mingle effortlessly and melodiously. I was discussing Stylusboy with another fan the other week & I expressed the thought that he "radiated calm" live & on record & I stand by that. The songs are beautifully crafted & their inner serenity helps expose all of their qualities to the listener & repay multiple listens. As I said in my previous review, those who know Holly's magnificent blues & jazz voice with all its power & dynamics will appreciate her demonstrating her vocal range on such utterly different material.

Stylusboy dubs this a "Handmade Indie Folk album" which really effectively captures the traditional songwriting craft which has gone into it: a true artist at work, but also has meaning in terms of the range of album variations & merchandise: check out his website (https://stylusboy.bandcamp.com/) for all the additional goodies which complement the music including Polaroids, hand sewn booklets etc.

So onto the other songs on the record.  Opening song "Embrace The View" is very much a scene setter for what follows, both in terms of soundscape (stripped back, haunting harmonies) and philosophy. Oddly enough, when "Out Upon The Ocean" came out a few months ago, Izzie Derry had just released a similarly maritime titled EP (‘Lost At Sea'): at the time I put it down to an odd & unrelated coincidence, but now I notice another point of comparison: both artists are taking time out of life to write songs reflecting on experiences to date: which is very much the theme of "Embrace The View".

"All The Details" is the relative rocker on the album (drums kick in!) and while far from Black Sabbath territory, offers a pleasing new dynamic to the collection and it sets the toes a-tapping.

"Find Your Gold" is another mid-album up tempo number with more drums & electric guitar, an exhortation to its audience which is closer to the "Indie" end of the "Indie Folk" spectrum. If that actually is a thing.....

"Keep You" returns us to Stylusboy's more familiar style of light, picked acoustic guitar (the other end of the above spectrum?)  so tranquil that at times the very movement of his fingers on the guitar are part of the arrangement almost, so prominent are they in the mix. Despite all this, the song is a live standout: no doubt because it commands our attention so effectively. Is that a ‘cello I hear in there too?

"Ride This Storm" is another one with more instruments  and while few if any of his other songs remind me of any other artist at all, this one brought the words "Paul Simon" into my mind (well passages of it did anyway), which I hope he won't mind my suggesting.

"Open the Door" is another finger-picked piece which like much of his work weaves a delicate balance between melancholia (in sound if not necessarily the lyrics) and its antithesis & this tension is another key aspect & strength of Stylusboy's work.

"Shelter In The Light" recalls "For The Souls of my Brothers" in terms of being a most compelling narrative: how much is as personal as that song isn't necessarily clear, yet it is written with as much sensitivity & compassion for the protagonist.

If the album started with a kind of reflective manifesto, it ends in similar fashion inasmuch as "This Is Where I Belong" sets an agenda for the future in the light of the preceding songs' self examination: a coherent end to a very well structured album.

If an album has been so well & lovingly wrought that it has no flaws, then one might call it "flawless": I think we can safely do so here. My only concern for Stylusboy is how on earth will he follow this?

He is playing at All Hallows' in Leeds on October 12th, the Big Comfy Bookshop on 18th October, the 4th November at Stratford Picturehouse & with special guest Mister Keith at Temperance on November 30th.

Last December, I was able to let you know about the festive version of "Silent Night" which Stylusboy released to aid the Carriers of Hope charity ...
[1 image] END_OF_DOCUMENT_TOKEN_TO_BE_REPLACED

I am pleased to be able to announce to you that Stylusboy has just released a seasonal single for us, being a cover of "Silent Night" and that all ...
[1 image] END_OF_DOCUMENT_TOKEN_TO_BE_REPLACED

It was only last week that I was telling you about the new Stylusboy single "This Is Where I Belong" which was released in advance of its parent EP ...
[1 image] END_OF_DOCUMENT_TOKEN_TO_BE_REPLACED

You'll no doubt have enjoyed that masterpiece of Stylusboy, namely   "For the Souls of My Brothers" on ‘Hot Music Live Presents Volume ...
[1 image] END_OF_DOCUMENT_TOKEN_TO_BE_REPLACED

Writing for a music magazine in Coventry & Warwickshire, which is let's face it pretty landlocked, I don't expect to review many maritime ...
[1 image] END_OF_DOCUMENT_TOKEN_TO_BE_REPLACED