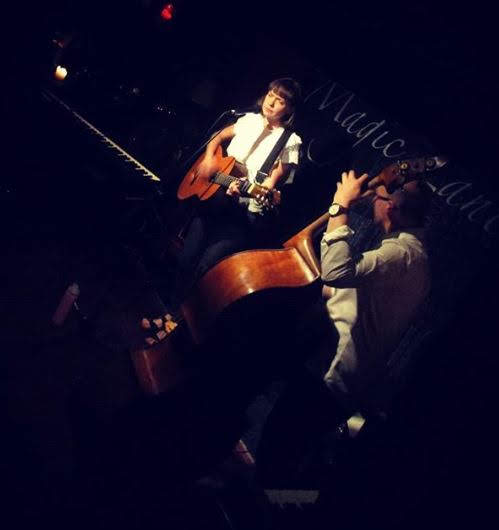 One of the issues which is a perennial worry for me in writing for "Hot Music Live" is how to cover even the most excellent of artists, the ones we should be reporting on, when I see them only a few months after my last review. We all realise & accept that most artists for obvious reasons may well have much the same setlist & lineup from gig to gig & in all honesty "they sounded as great as last time" isn't much of a review to offer you.

In practice, as hopefully my reviews show, this really doesn't happen with the calibre of artists we have around here currently: as anyone kind enough to follow my writing will see, I have repeatedly put myself in such a position yet every time lineups have been tweaked & even more often substantial repertoire changes made.

The Burning Salt gig at the Magic Lantern last night was no exception. When I saw them last in early May, the band playing consisted of singer/writer Hannah Hull on guitar & keyboards, John Parker on his customary double bass plus lead guitarist Bobby Williams. This time it was just Hannah & John so the sound had changed considerably in the arrangements of the songs I had heard before which was most interesting. Equally, the last time they played songs mostly from their latest album "Automatic Lullaby" and their "Dirt" EP, the collection of songs written about staff & inmates at Holloway Prison. This time, although material from both still featured, a significant portion of the set came from their upcoming 19 song (no that's not a typo) album "Close To Home", whose songs reflect Hannah's personal experiences in the way those on 'Dirt' reflected those of others.

Without Bobby's many textures, the songs tended to be stripped right back to their stark, bare bones: which given the equally stark, often haunting, frequently deeply unsettling lyrics, was highly effective.

John, whose bass playing I have loved & admired since I first heard it with Nizlopi, generally played a long way from the folkish roots with huge amounts of jazz & even hip hop stylings he used with that band. He varied his style quite a lot this time to complement Hannah's playing & to suit each song, but it was interesting how relatively high his lines were placed in many arrangements: often rather classical in style, he often adopted the sort of part one might normally expect from a ‘cello (John's bow got deployed quite a bit during the evening). Not that that meant he didn't play the odd Mingus type part when he felt it was appropriate.

I was struggling to adequately describe Hannah's vocal range & was rather tentatively going for "contralto" so I asked her: she revealed that there is a big cross over with a tenor range & that helped me: it is most strange but at times the lowest element in some arrangements came across as a (female) voice…. Which isn't terribly conventional is it?

Her playing of both instruments tends to be rather spectral to suit the tone (though on one of the more energetic numbers she switched from delicate picking to enthusiastic strumming) but on one of the most catching of the new numbers (one picked out by several people at the break), her piano playing had Bach like qualities I thought: though I bow to John who went for Debussy.

As with all her past songs (with the possible exception of "Superstitious Woman"), Hannah's lyrics can be melancholic at their lightest and can tell grim (genuine) stories at the other end of the spectrum: which, as I said last time, is in stark contrast to her buoyant & good humoured demeanour between them. It is probably a yin & yang thing.. Her performances are intense but that it is in the pursuit of emotional honesty: I found it illuminating that in conversation with her, she cited Patti Smith, another artist who would not dream of delivering work in any other way.

I for one am really looking forwards to "Close To Home" next Spring & hopefully Burning Salt will return to Leamington to play a gig promoting that record then.

Thanks too to Paul Otten who kindly gave his time to get the sound for this gig right (believe me with music this exquisite, poor sound could have wrecked the entire effect) and Martin Luckhurst for a vital equipment loan.

What an interesting & subtle band Burning Salt are.
[5 images] END_OF_DOCUMENT_TOKEN_TO_BE_REPLACED