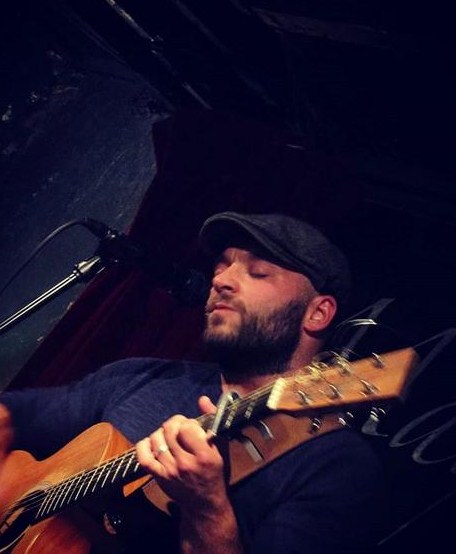 I am a big fan of the performing & writing of Ross Darby so it was a big pleasure to get another chance to review him for this magazine on the occasion of his Magic Lantern gig. Unfortunately I didn't get to review him in his Fallows days (I hadn't then started writing for "Hot Music Live") & in fact haven't been able to since I wrote about his current EP ‘Down the Rabbit Holes' (last March). As Ross himself says, life has got in the way of recording & playing (my congratulations by the way on his very recent marriage to Alana: what a valid distraction from other activities) but his comments at the end of this performance suggested that it & the really great audience response have encouraged him to write & play more.

And rightly so. His playing was, in my opinion, even better than ever. A confident & adept guitarist, his singing has matured over the years I've been listening to him & what was excellent to begin with is now even better. That's not merely in technique (he himself noted how as the evening progressed & his voice responded to the atmosphere his range increased too: falsettos were deployed towards the end) but also in the range of voicings which simply enhanced the beauty of the material.

And what material: this is a writer with no need to rest upon his Fallows laurels (he didn't) and anyone capable of writing songs as superb as "Follow You" (a personal favourite) or "Beautiful & Strange" is one of the area's  (slightly hidden) gems: I really would like his material to be shared with a wider audience. That four of the songs were new is indicative too of a new impetus to his career.

What is also remarkable relates to his command of the audience. Very unusually for the venue, a few of them were rather un-Magic Lantern like during the set of support act Dave K: talking loudly & even calling out. He isn't as experienced as Ross unfortunately and by trying to drown them or respond, didn't get the reaction he & his original material deserved. Ross however had the same crowd & held them in the palm of his hand with the simple performing of superb material calmly & confidently so even very quiet passages were treated with due respect. There is a certain aura or charisma around the best artists & Ross has it in spades. They loved him. So did I. So will you. Check him out. He's back at the same venue on March 14th but do keep an eye on his page as I hope he'll be playing elsewhere in the meantime.

Today is the release day for the new Ross Darby single "Around This Town", his first since the much applauded "Rose" which came out in July 2020 and ...
[1 image] END_OF_DOCUMENT_TOKEN_TO_BE_REPLACED

When I reported mere days ago that one of the artists who had recently been recording at 14 Records with Matt Waddell was Ross Darby, I certainly ...
[1 image] END_OF_DOCUMENT_TOKEN_TO_BE_REPLACED

It is a real privilege & pleasure to be able to review the new EP by Ross Darby entitled "Down the Rabbit Holes" which will be released on Friday ...
[2 images] END_OF_DOCUMENT_TOKEN_TO_BE_REPLACED

A whole lot of great news just in from Ross Darby I'd like to share with you.
[1 image] END_OF_DOCUMENT_TOKEN_TO_BE_REPLACED

Well here I am again, this time reviewing not one but two artists on whom I fear I may have already used up my supply of appropriate superlatives in ...
[3 images] END_OF_DOCUMENT_TOKEN_TO_BE_REPLACED