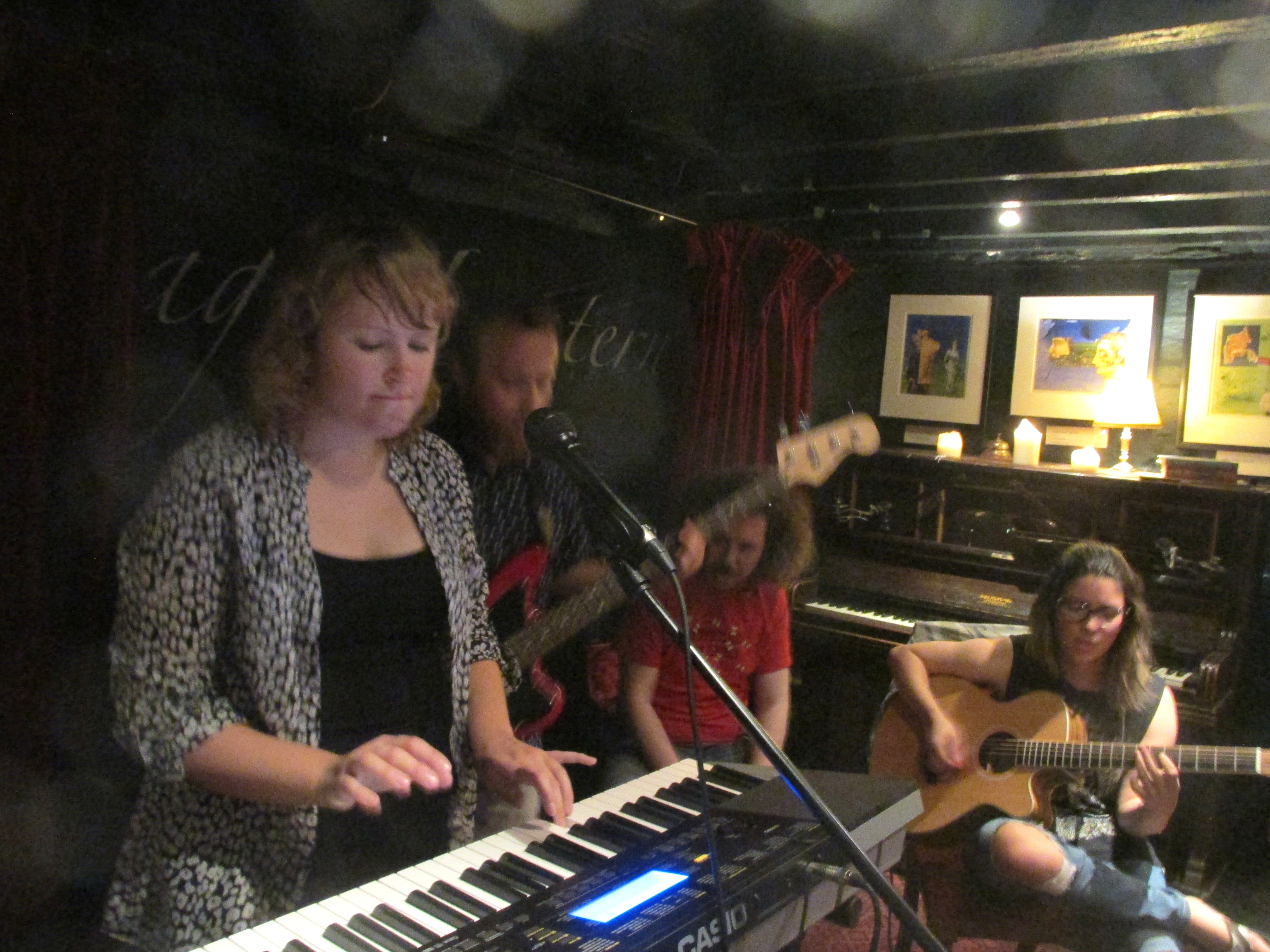 I should really like first of all to voice my appreciation to the members of both Shanghai Hostage & Brass Hip Flask. Both bands are among the hottest currently on the local scene (though greatly to their moral credit both seemed a little bemused when I put this to them): if people forced me or most other local music lovers to compile a top five bands grabbing attention at the moment, it would be hard to see anyone's list not containing both.  However each band generously & significantly adapted their act to fit the intimacy of the venue & such was their taste & musicianship that despite fielding changed lineups, different instrumentation & customised sets, their performances fitted the Magic Lantern like a glove.

First up were Brass Hip Flask, in a truncated configuration of Callum & Stuart Mckissock, both playing guitars (Callum is normally on bass of course), fresh from their acclaimed (and much louder) Main Stage appearance at the Godiva Festival less than a week before.

As you might expect, what we got was pure unsullied blues: the band's unique & original take on the form with their own compositions sounding just like those of the classic era. Playing beautiful instruments including a resonator guitar and using a scrapped cassette player to amplify, the sound was everything you'd expect: raw yet melodic, passionate & yet not clichéd. These guys so clearly love the form that their hearts go into the writing & playing as much as their conscious minds & the audience could certainly tell. It is not necessarily always the case that the support band (and of course this band cannot normally be considered such) gets requested to play encores. They played three by public demand: the final one being an extraordinary piece (I'm told a fair amount of improvisation was going on though it wasn't obvious to me) which seemed to meld flamenco with the blues.... Check them out, their music & their activities at https://www.facebook.com/brasshipflask/

They also are back at the Magic Lantern on October 26th

Headliners Shanghai Hostage defy categorisation (that's a compliment by the way). Self defining as "multi-genre" they manage to evade all the normal clichés & expectations surrounding "crossover" or "fusion" acts.  Again I'll start with their own self descriptions which cite influences such as "Ska, Punk, Desert Rock, Reggae, Hard Rock" plus "Hives, Wolfmother, Led Zeppelin": and frankly listening to them, most of these influences were so deeply embedded in the music that I'd not have detected them unprompted.

Other bands who like to draw from various musical wells can go down a couple of routes: either alternating genre styles in sets as if desperate to find something (anything) to please the audience and thus lacking genuine character & identity, others go for hybridisation. Neither I think applies at all to Shanghai Hostage

Each song is totally individual and its connections with genres subtle & suited to the song in question. One was described as "folk" and it was perhaps the most folky of the songs but pure folk it was not: just a great song with certain flavours. Other styles floated in and out of my perceptions: I heard bits of Crusaders, one song mutated into a jam with singer/keyboardist/writer Sophie switching to clarinet and I heard Brubeck type modern jazz. Another, billed as their "disco" song was real funk.

The musicianship was most adept, most flexible & thankfully most joyous. This band absolutely radiate pleasure in playing & that really does connect with the audience. Above all, what they play, as with all the artists I love, serves Sophie's most interesting & original songs. Like other artists I focus on in these reviews, Shanghai Hostage may have influences but they copy no-one & are utterly true to themselves. Even a cover of "Message To You Rudy" was delivered in a highly humorous (though respectful) style which while not a million miles from Dandy Livingstone's, was purely their own.

Sophie Hadlum, as noted, writes & sings & plays a variety of instruments & is an engaging, charismatic MC for the band. She even sang the opening number in French to conceal from all but French speakers its bawdy lyrics. As for her vocalisations on "Message To You".. I am not sure I have anything to say except "how did she do that?" which to be fair is only quoting her own words anyway.

Lead guitarist Beth Black first engaged with my consciousness when she was a vital part of Rooted & Booted.  You can certainly occasionally hear her reggae chops in parts of some songs, but this band gives her far more freedom to offer virtuoso and imaginative, tasty playing: fills, runs, licks: you name them... they were there.

The final element on the night, underpinning the others was the cajon playing of Dominic McAvera

Both of these bands fall into the category "must see" so place them on your bucket list & then aim to tick them off it. You may even get to learn how Shanghai Hostage got their name....

It is literally only a single month since I reviewed the most recent Shanghai Hostage single "Convent" for you, yet here today am I writing about its ...
[1 image] END_OF_DOCUMENT_TOKEN_TO_BE_REPLACED

I'll hold my hands up & admit that back in March my expectations for having much to write about in this magazine were low and so they have been ...
[1 image] END_OF_DOCUMENT_TOKEN_TO_BE_REPLACED

Just as the initial curtailment of live gig opportunities saw many of the artists we report on in "Hot Music Live" upskill themselves to be able to ...
[1 image] END_OF_DOCUMENT_TOKEN_TO_BE_REPLACED

Today I'm really pleased to be reviewing the new, the brand new, single by Shanghai Hostage within minutes of its video being publicly released ...
[1 image] END_OF_DOCUMENT_TOKEN_TO_BE_REPLACED

Well here I am again, this time reviewing not one but two artists on whom I fear I may have already used up my supply of appropriate superlatives in ...
[3 images] END_OF_DOCUMENT_TOKEN_TO_BE_REPLACED