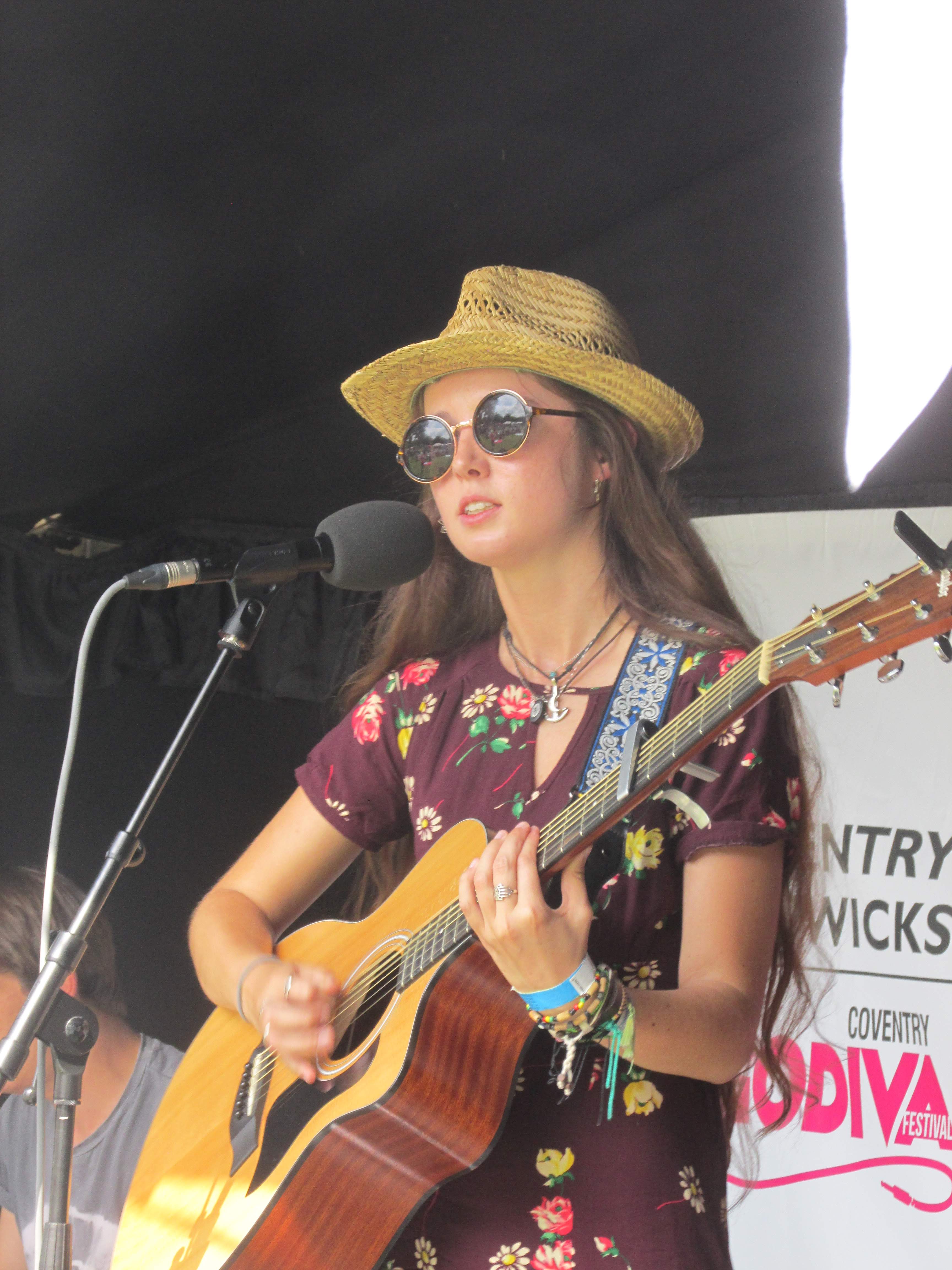 I could, I suppose, run through every act I saw & enjoyed at the 2019 Godiva Festival in detail which would give them the credit they thoroughly deserve, but I fear that no one could be asked to try to read through anything that long. There were many you see.

So I'll go for broader brush strokes & themes if you don't mind. My first & over riding theme is how powerful the Festival is for local music. Yes I do understand the pulling power of the Big Names from elsewhere, many of whom I like too, but whom I tend not to have the time to catch given my focus on local musicians. There were around 80 acts on across the three days & the vast majority were from our own scenes. I'm afraid several of our more mainstream media colleagues tend to skate over this in favour of covering the Big Names, which is a shame as exposure which so helps our artists thanks to the Festival could easily & helpfully be reported more widely. I think the true glory & certainly the legacy of the Festival is its boosting of artists on the practice slopes of their careers. In perhaps a testament to the growing influence of "Hot Music Live" I was, while writing this, asked to participate in a BBC Coventry & Warwickshire discussion on Justine Greene's show & I certainly emphasised that belief to her.

You can't I think underestimate the impact of various things the Festival can do for artists. For some, to be invited to play is a huge step forwards & an honour: their words not mine. To be asked to return in subsequent years : similarly. For others, the elevation to a slot on the Main Stage is equally an honour: how great to see those marvellous talents Caleb Murray & Calton Kelly who are part of our "Hot Music Live Presents" project up there. An honour, but a deserved one in each case. In fact in a rare direct quote for me, I received Calton Kelly's permission to cite him as saying "awesome" about the sheer numbers of local acts & the quality of them this year. And he was far far from the only one to say that from so many musicians whom I spoke with to former Lord Mayor of Coventry Tony Skipper who is another person one encounters repeatedly around the stages with local acts on them and who is a passionate advocate for exactly what I'm talking about..

I am fully aware from the disappointments of artists who don't get invited that the mechanisms for the Festival participation can't include all the fantastic acts & I do feel sorry about that. But when the "Godiva Calling" process gets bands as great as Brass Hip Flask & Evergreen onto the Main Stage, then it is working well.

In fact two of my delights were that sixteen year old Abz Winter & Stratford based Evergreen who have barely been in existence six months were both spotted: it would be easy to imagine how they might be off the necessary radar for the time being. In fact these two acts plus BBC Coventry & Warwickshire Introducing Artists of the Month (well last month) The Rising were probably the three acts with the most buzz: when people were comparing notes ("have you seen?") these were the ones (outside the big established ones naturally) which came up time & again. Expect to hear lots more about them all.

I should say too that we may look back on the 2019 version of the Festival as the year a breath of mighty air blew through & reinvigorated the local scene as so many people were talking about the healthiness, diversity and quality of what we now have, plus I spoke with several musicians visiting from further afield who not only cited these aspects but were also impressed with how musicians support each other in Coventry & Warwickshire: it is far from necessarily so elsewhere. I lost count of how many other musicians I saw seeking out others' acts & cheering them on. You even had Lynval of the Specials touring the site for two days evangelising & the Levellers turned up to dance to Kiaya Lyons on the BBC Stage.

I had several  chats with Dean MacDonald whose band the Session opened the Festival from the Main Stage & a number of themes emerged: several I've just covered but let's not underestimate the feeling a band like his with five albums already released can feel to be asked to open the festival in their home city: and boy did they give it their all: yet interestingly afterwards, two members spoke forcibly about how they really like smaller gigs for audience contact just as much, and that was borne out also by artists of the magnitude of Joe Dolman & Roddy Byers who played on the smaller stages & generated incredible passion & audience reaction. Indeed Joe was one of those musicians I saw all over the festival seeking out new music & supporting his friends. And one could say the same about this magazine's HotMusicAl. (Check out his article in the magazine please).

So I suppose you'd like a few more specifics? Especially about names I've not yet mentioned? Well in keeping with what I have been saying, there was a noticeable correlation between the acts we cover in this magazine & the acts performing. Many appear on "Hot Music Live Presents". Very many have been involved in BBC Introducing for Coventry & Warwickshire, featured on the ‘Coventry Culture Show' on Touch FM and many on the HillzFM Local Charts. These are the local media who are getting behind local talent & it's interesting the names who repeatedly crop up in common.

Some are totally established on top of their game like Wes Finch, Danny Ansell or  Shanade Morrow. Others are the hot names building very steady & swift recognition like Izzie Derry, Stone Bear, Chasing Deer  or Taylor-Louise: all have a sense of momentum in what they do and don't rest on any laurels. Increasingly their reputations in our area are being replicated across the country.  Others don't fit into any easy category: for example one of my favourite sets was by James Lapworth of Rosetta Fire playing a solo. Another would be the prodigious & utterly individual talents of Nicky Ager who left a lot of jaws dropped on the BBC Stage or the traditional Neapolitan songs of Angelo Cardone. Some, like Andy Beglin have obvious talent but are taking their first steps into new careers (in Andy's case a solo one after many years in great bands).

Given that I promised this would be a thematic review, I regret not being able to write more about performances I greatly enjoyed (though if you look back at past reviews I mostly have done for the artists involved  so & in other cases fully intend to). I also would not wish to finish without name checking other artists whose performances I enjoyed such as The Caprines, Levi Washington,  Loveday, Ace Ambrose or J.Kirsty.Clarke all of whom I should be delighted to see again & indeed am planning to set up gigs for so I can do so.

For my final section, I'd very much like to focus on various people who don't feature in many, if any, mainstream media accounts of the Festival. In fact, had it not been for the kind help & support (during a period when they were ultra busy & could very easily have been forgiven for not being able to) of Carl Bainbridge, Godiva Festival Marketing & Design Manager & a man very well known to readers of this magazine, Jon "Bungle" Blackford, Godiva Festival Technical Director, this article would have not been as it is: they and the production team were really helpful in facilitating it. Thank you.

In fact over the three days I met nothing but excellent support from production team members, the many security staff whom I encountered on gates internal & external and many other staff. There were issues needing sorting for artist access & parking (possibly due to new ticketing formulae) but the "behind the scenes" teams deserve a lot of praise & understanding for difficult, unsung & too frequently thankless efforts.

As do the technical crews who worked extremely hard especially over stage turnarounds, through periodic power losses, blown speakers etc. In particular I should like people to be aware of Chris Field & Ollie Bond on the Microacoustic Stage (which lost power several times) and Rich Keogh on the BBC Stage where he had the extra pressure of periodic live broadcasts...And Sam McNulty who oversaw both stages & devised the lineups on them.

This is in many ways an unusual review but definitely one I have very much looked forwards to writing for some time.
[1 image] END_OF_DOCUMENT_TOKEN_TO_BE_REPLACED

It was a pleasant surprise to learn that one of our area's most dynamic & exciting bands The Session have managed to unleash a new single called ...
[1 image] END_OF_DOCUMENT_TOKEN_TO_BE_REPLACED

Another great upcoming release which I have had the pleasure to have been able to listen to for the last few weeks has been the new, Leamington ...
[1 image] END_OF_DOCUMENT_TOKEN_TO_BE_REPLACED

Firstly an apology: this is not & cannot pretend to be a broad overview of the 2018 Godiva Festival (the 20th in fact): I think that is beyond anyone ...
[8 images] END_OF_DOCUMENT_TOKEN_TO_BE_REPLACED

Izzie Derry live at the Godiva Festival: not once but twice

While everyone at "Hot Music Live" is getting excited about the "Hot Music Live Introducing" night at the Zephyr Lounge on 20th October in ...
[1 image] END_OF_DOCUMENT_TOKEN_TO_BE_REPLACED