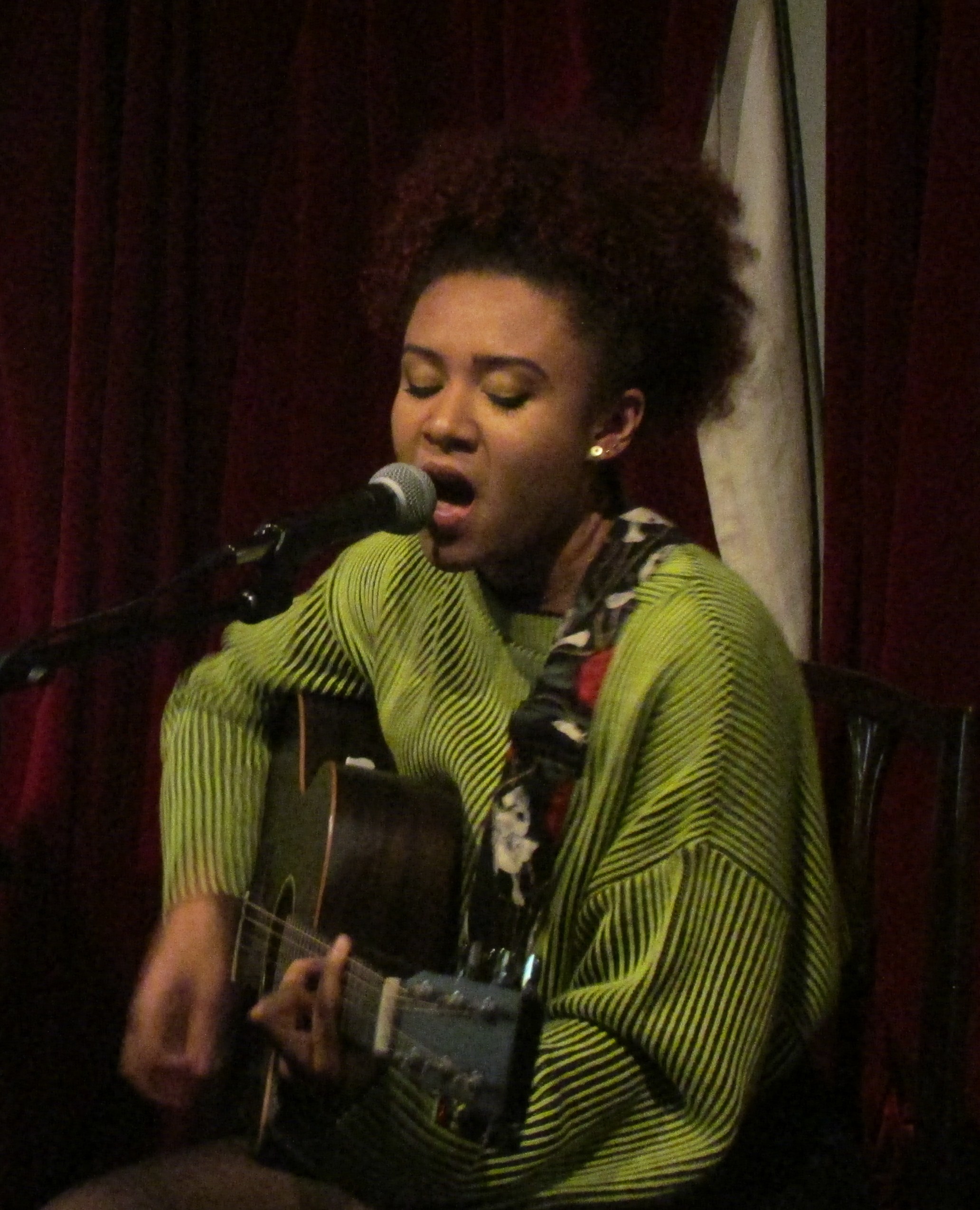 Another cracking evening which saw the grand musical talent of Warwickshire displayed on several levels.

Two of the most exciting local artists whose stars are shooting indeed: both with great futures but the nice thing for the broader scene is they are wholly individual: they complemented each other rather than sounding similar.

First up was the rapidly emerging Abz Winter, a sixteen year old whose name you can't miss if you study the HillzFM local charts (her song "Summer Sun" has topped them for weeks), or listen to BBC Coventry & Warwickshire. I learn too that that connoisseur of local music, Sam McNulty has invited her onto two separate stages at next week's Godiva Festival (as indeed he has headliner Taylor-Louise) and I aim to see both performances.

So why are all these experienced music lovers getting so excited over such a young musician? Well I detect several possible reasons. Her voice is very distinctive: powerful & attractive and Abz uses it well. Secondly despite her years, she is already a good writer: her songs while presumably influenced by her favourite artists are distinctive & resemble no single template. They flow with boundless energy & enthusiasm & the lyrics while full of great pop hooks are not repetitive in a negative way. She also has good quality control: rather than to try at this stage of her career to fill the set with originals, she makes sure those played are high quality, with no filler & is content to complete the list with covers for now: several by her favourite, Meghan Trainor. If there are themes, apart from a zest for life, the songs written or chosen do look at personal identity & image. It is also interesting how she has worked on her writing with Fred Cox (who has worked with Grace Carter, Paloma Faith, Idris Elba and Rag N Bone Man) and with Jess Glynne's manager: I think one can safely guess that they would not spend their time with anyone unless they rated them highly.

Another aspect of Abz's quality control is her onstage critique of the quality of a few of her backing tracks: she is delightfully candid about this & clearly complacency is not part of her vision. Her onstage persona is equally delightful: she has an easy & humorous rapport with the audience & a slightly self deprecating wit. Personally I found her voice at its very best on the quieter tracks or those with more subdued backing: shorn of sound from elsewhere she unleashed its full power (on one song actually abandoning the mic entirely for a long portion). She has several interesting vocal mannerisms already & on the covers did not copy the original performances but made them her own.

You can catch up with all things Abz Winter at her pages here:

Apart from her two Godiva appearances, live outings for Abz  in the immediate future include Saturday 29th June, at HillzFM, on Sunday 30th she is at Rugby's Got Talent at 12 and Kenilworth Carnival at 5 pm.

What then about Taylor-Louise which I have not previously said in several earlier reviews in this magazine? Well most aspects of her artistry have developed to be honest. The first thing I think it is important to restate is my point about how Taylor-Louise supports & mentors others: hence Abz's presence tonight. This transcends individual circumstances as it helps sustain the local music scene & touches so many others.

I have also said how prolific a writer she is, but even so, I was astounded by tonight's setlist. Taylor-Louise played two sets at this venue in February, mostly of brand new material. However tonight, in a wholly original set, I only counted four songs from the previous gig, mostly from her current "Black Heart" EP and associated recent singles (this evening actually was the launch day for the latest single "Gone" which naturally was performed). Seven at least I had never previously heard live: most were brand new as live pieces & several more had not been played in a long time. I had thought the "Black Heart" songs were a quantum leap forward but you should hear the new material (and I gather she is writing & recording yet more songs which didn't make the cut last night). Mostly if not entirely in her signature themes of self reflection & philosophical musing morphing into positive action planning & advice to others, the cream on the cake was a previously unheard song "Him', coaxed out of Taylor-Louise only as a second encore, this great song is quite unlike anything else in her repertoire: a bit folky & even rather Spanish in sound: it sounded wonderful on a solo guitar & I wonder how she might record it: it certainly worked really well in this sparse format.

Yet another aspect is the strength of her songs in terms of flexibility of arrangement. She played tonight with the splendid accompaniment of percussionist Jeremy Walker & it was difficult to remember sometimes that it was only two of them, so seamlessly did they weave around each other: especially as Jeremy had barely heard some songs & several was as new to him as they were to me. The changed arrangements of the "Black Heart" songs tended to bring out more of the compassionate side of their lyrics. It was interesting how in the soundcheck, they played a gentler version of "Generation Now' than on the record, though the way they later played it in the gig itself was a bit closer to the overwhelming intensity and rawness of the single.

Finally, on a personal note, Taylor-Louise kindly dedicated their rendition of the song she let us use on "Hot Music Live Presents Volume One", namely "Put In To Words" to me: so I am keen to express my appreciation here..

Apart from her two Godiva appearances, live outings for Taylor-Louise in the immediate future include July 4th & September 5th at the Fat Pug & 20th and 21st July at the Fab Fest at the Old Tramway in Stratford.

It's been quite a while since I had the pleasure of reviewing a Taylor-Louise release: in fact it was about eighteen months ago when the title ...
[1 image] END_OF_DOCUMENT_TOKEN_TO_BE_REPLACED

What a fiesta of an evening on Friday at St Patrick's Club in Leamington.
[3 images] END_OF_DOCUMENT_TOKEN_TO_BE_REPLACED

If you are counting, you'll have spotted that the new single "Gone" is the third single to be released from Taylor-Louise's stunning "Black ...
[1 image] END_OF_DOCUMENT_TOKEN_TO_BE_REPLACED

When is "easy listening" not easy listening?Possibly when it is one of those quite rare songwriting approaches where the composer deliberately ...
[1 image] END_OF_DOCUMENT_TOKEN_TO_BE_REPLACED

I don't usually review artists' websites (in fact I don't think I ever have before?) but why not? They are a crucial method of keeping ...
[1 image] END_OF_DOCUMENT_TOKEN_TO_BE_REPLACED

Well here I am again, this time reviewing not one but two artists on whom I fear I may have already used up my supply of appropriate superlatives in ...
[3 images] END_OF_DOCUMENT_TOKEN_TO_BE_REPLACED