"Ticket To Nowhere" by Matty Coles


"Ticket To Nowhere" by Matty Coles 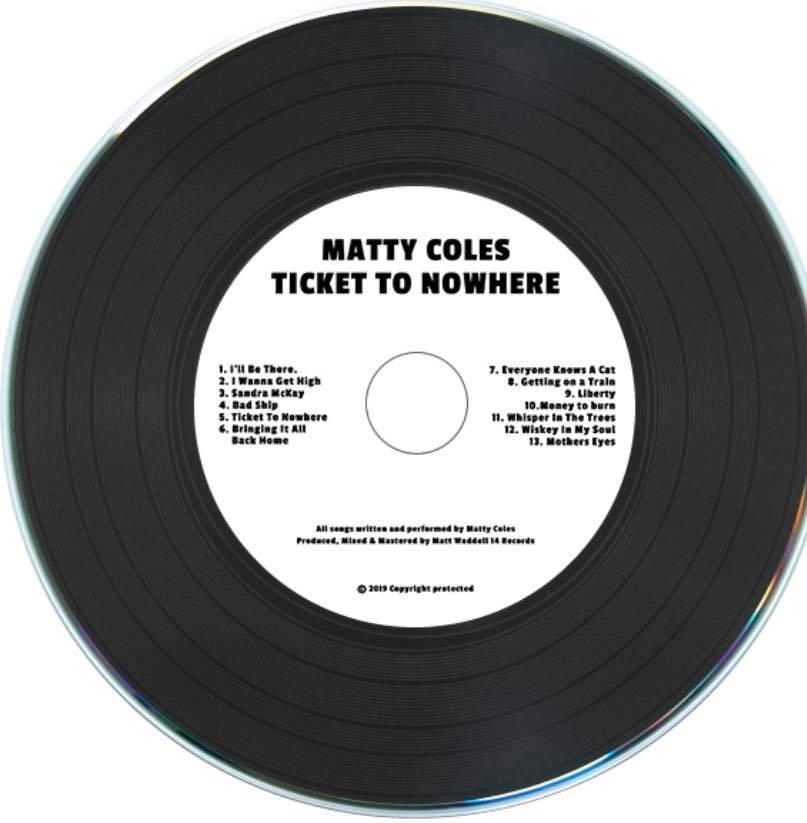 At a dozen tracks, ‘Ticket To Nowhere', the new album by local singer-songwriter Matty Coles to which I've been listening, provides excellent value for your money. Here then are some of my reflections on a few of the songs before you make your own judgements once you've bought it. Which I suggest that you do.

Recorded at 14 Records, the album also contains the single "I Wanna Get High" and since that is the track some of you will already know, let's start there with this catchy & positive tune. Built around memorable couplets you can hear why it got the nod to be picked for the single berth & I am sure it will be a central part of his live act for a long while as well as a song to attract airplay for him.

There has clearly been a fruitful discussion between the artist & his producer to take advantage of the studio in helping to create a variety of sounds & feels across the set of songs, utilising a wide range of other musicians & instruments. It is interesting to note that the album launch (at the Spa Centre on June 22nd) involves a full band: this will ensure the gig reflects the sound of the album, though I'm sure all the songs are designed also to be played solo when appropriate.

The title track has a very full production in fact: rather like early 1970s John Lennon solo tracks & Matty sounds a bit like Paul Carrack on this one (and perhaps on "Money To Burn": again Lennonesque in its "Imagine" sound and Carracklike with its soulful delivery) . Like several songs ("Bad Ship" is another), the words hint at personal angst without being too specific about the details: a good move I think since these allow each listener to apply them to their own stories & circumstances. In other tales such as "Whispers In The Trees", a compassion for others is expressed to balance the picture: this is someone with a heartfelt backstory yet one who can use his own griefs to be more empathetic to others.

The intriguing "Sandra  McKay" is one of my own favourites on the album: a disturbing story enhanced by the production, the ominous tale is told partly in a somewhat dispassionate way which heightens the effect also, where anger breaks through, the target isn't always clear either (who is to blame? All of us in a way?) which is good in my book: I like ambiguity. Another personal pick (yours might very well, and totally reasonably, be different) is the Celtic/Indian  beauty of "I'll Be There".

"Liberty" on the other hand comes across as a bit "Who" both in the setting & in the lyrics which touch upon some of Pete Townshend's own interests. "Whiskey in My Soul" though is by far the most Blues song on the album & another which particularly caught my attention (another I'd like to hear live) & "Mothers Eyes" channels Joe Cocker rather: as soulful as say "Money To Burn" but more rasped out vocally. Also good. Variety is the spice....

In terms of the photos illustrating this article by the way, my thanks to Gemma at 14 Records for those of Matty & of the single cover. Matty has gone down the "white label" route for the album & I felt some additional images might be in order.