Evergreen at the Magic Lantern 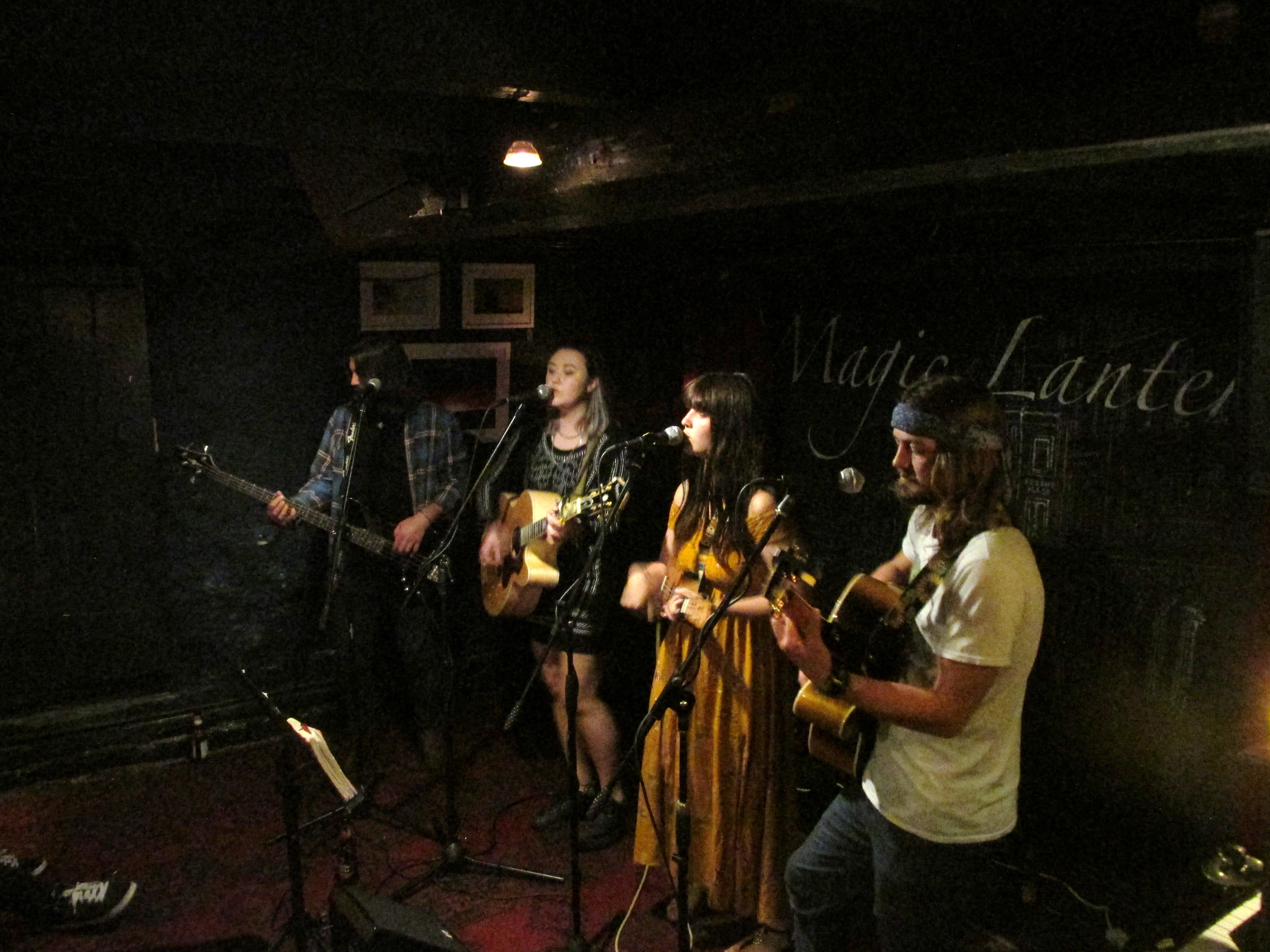 I flatter myself that some of you may remember my reviewing the Hansel Brothers in the past for "Hot Music Live" (most recently on February 10th). At any rate, I enthused over this dynamic act & the verve, musicianship & enthusiasm they brought to their chiefly covers set. I also noted how intrigued I was by their compelling originals, a few of which they dropped into their set. Afterwards I urged singer/bassist Tyron & guitarist/harmonica player/singer Rikki to play a whole set of these soon.

I was therefore delighted to attend their gig last night at the Magic Lantern for such a set, played as ‘Evergreen', their new originals band which also features the considerable talents of two local writers & musicians, Erin O'Rourke (who mainly played guitar but switched to playing Tyron's left handed bass upside down for the encore: no mean feat considering the strap issues the instrument had) and Noah Dobbie (who switched between  ukulele to guitar)

The first thing to note is that by any definition, this was great music. The second was that I, and the entire audience, enjoyed it very much. But possibly not quite as much as the band. I don't think I've seen a band show so much joy for what they do in a long long time & it was both refreshing & uplifting. This really makes a difference live: they clearly work very hard on the technicalities of their craft but having mastered it, play with absolute pleasure in  what they are doing.

This began from the start when Rikki & Tyron played a warm up set of their favourite covers (I refer you to my February piece for many of the details of this part), culminating in an extraordinary version of "A Quick One While He's Away" which while mostly lovingly faithful to the Who's original, stretched certain sections out to great effect.

After the break, the four piece were frankly magnificent. I had remarked on how the Hansel Brothers seemed to have a great love of late 60s early 70s bluesy rock type material in terms of their originals & this is to some extent the basis of Evergreen's material overall (and remember that there are four writers contributing): they cite influences such as the Band, Canned Heat, Jefferson Airplane, Fleetwood Mac etc & these are all detectable: one would also be remiss not to mention the Mamas & Papas given that Evergreen essentially deploy four part harmonies throughout: Rikki stated that he finds crafting these harder than working out his accomplished lead guitar parts, which shows the work they have put in. Rikki's guitar work is superb throughout and all four are great instrumentalists with the webs of guitars, bass, uke & harmonica weaving through their singing.

All the songs played were of the highest standard, memorable & impacting instantly on those of us who had not heard them before. I'd love the band to release them & I gather recording experiments are taking place, though sensibly with caution: these songs work so well live that it is really important that recordings reflect them properly. In the meantime you need to see & hear them live: and that's a real imperative.

This was my debut Evergreen gig & I'm still buzzing with what I experienced from this talented supergroup. I really look forward to seeing them as often as I can. This band have everything they require to move on up & win many hearts. They are already attracting loads of attention from local radio stations interested in roots music & are, I am delighted to report, through to the ‘Godiva Calling' final: if you can, support them please at the New Albany in Coventry on May 31st (it's a Friday)  to help them get the Main Stage slot they deserve at the 2019 Godiva Festival.

Check out their page https://www.facebook.com/evergreenharmonies/  for future live dates: I'm hoping we can welcome them back to the Magic Lantern before too long also.

I think that I can safely say that I have not before reviewed a more eagerly anticipated debut single than "Sunny Lady" by Evergreen.
[1 image] END_OF_DOCUMENT_TOKEN_TO_BE_REPLACED

Well here I am again, this time reviewing not one but two artists on whom I fear I may have already used up my supply of appropriate superlatives in ...
[3 images] END_OF_DOCUMENT_TOKEN_TO_BE_REPLACED