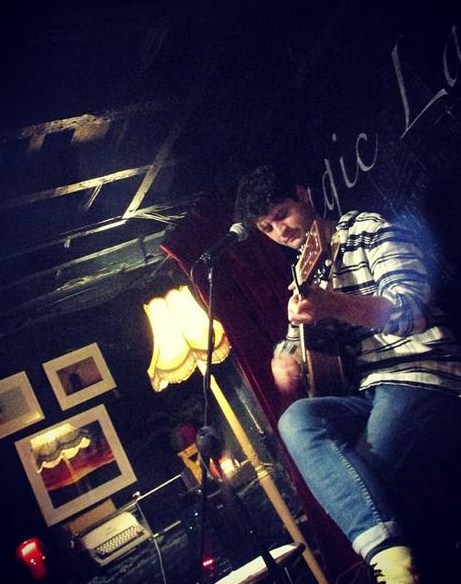 Another wonderful night of song writing craft & passionate performances at the Magic Lantern last evening & two more great local musicians who clearly enjoyed themselves as much as the packed & rapt audience clearly did.

Support act Henery was reviewed by me only a few weeks ago at his superb gig at the same venue with Ellie Gowers: always a real problem, or a potential one for a reviewer. However it turned out fine as not only did Henery unleash songs he had not played on the previous occasion (including new ones & ones he has never hitherto performed live) but I noted that the experience of playing solo gigs (as a member of the Ellipsis he of course is extremely experienced at group live work) has impacted on his confidence: he really let his magnificent voice loose this time in a way he hadn't quite before: and it is certainly not a voice to be missed. What is also very evident is how damn good he is as a songwriter: every one of his pieces last night could grace the album he is looking forward to recording: they vary very much in style, tempo & playing technique & each one is instantly memorable. Check Henery out at his page at https://www.facebook.com/heneryuk/

Jake Rizzo (who has performed very many times in our area as Jake Melles in the past) is now based in Guildford so it was great to welcome such a popular member of the scene back for his first concert of original material in Leamington for two years. Switching between a Telecaster & his acoustic, Jake also moved between old favourites and brand new ones (he revealed that he has been recording with Matthew Cotterill: who was another member of last night's audience) plus one interesting cover (the only one of the night: the venue really is seen by artists as one where their originals get the attention they deserve). Like Kristy Gallacher playing a Steely Dan song recently, "Bohemian Rhapsody" is far from the first song which comes to mind in terms of ones to play solo on an acoustic.... Jake has come up from the local open mic scene where I first saw him in his teens & it is wonderful to see what an accomplished, confident & engaging performer he has developed into. And popular too.

Those present loved the evening's entertainment: as with so many of my recent reviews, I find myself coming back to the same points about aspects of our local scene: the abundance of individual styles in performing & writing, with unique voices having the confidence to stick to their own identity, yet with so many of them offering unconditional support to each other & obviously enjoying their friends' talents & success. And no, the evidence doesn't suggest that this happens everywhere unfortunately. Long may it & the artistry of people like Henery & Jake thrive.

Double good news for the "Hot Music Live" community as not only does Jake Rizzo have a brand new single called "Obvious" out today, but it's a ...
[1 image] END_OF_DOCUMENT_TOKEN_TO_BE_REPLACED

It's a rather unbelievable two years since we last covered a Jake Rizzo release in this magazine, and ironically our review on that occasion ...
[1 image] END_OF_DOCUMENT_TOKEN_TO_BE_REPLACED

It is said of several aspects of life that "a week is a long time" within them: to the list we might now add the career of Jake Rizzo.
[2 images] END_OF_DOCUMENT_TOKEN_TO_BE_REPLACED

It is always a great pleasure to review excellent music, but to focus on a debut single is that extra bit special as you feel like a traveller ...
[1 image] END_OF_DOCUMENT_TOKEN_TO_BE_REPLACED

Well here I am again, this time reviewing not one but two artists on whom I fear I may have already used up my supply of appropriate superlatives in ...
[3 images] END_OF_DOCUMENT_TOKEN_TO_BE_REPLACED