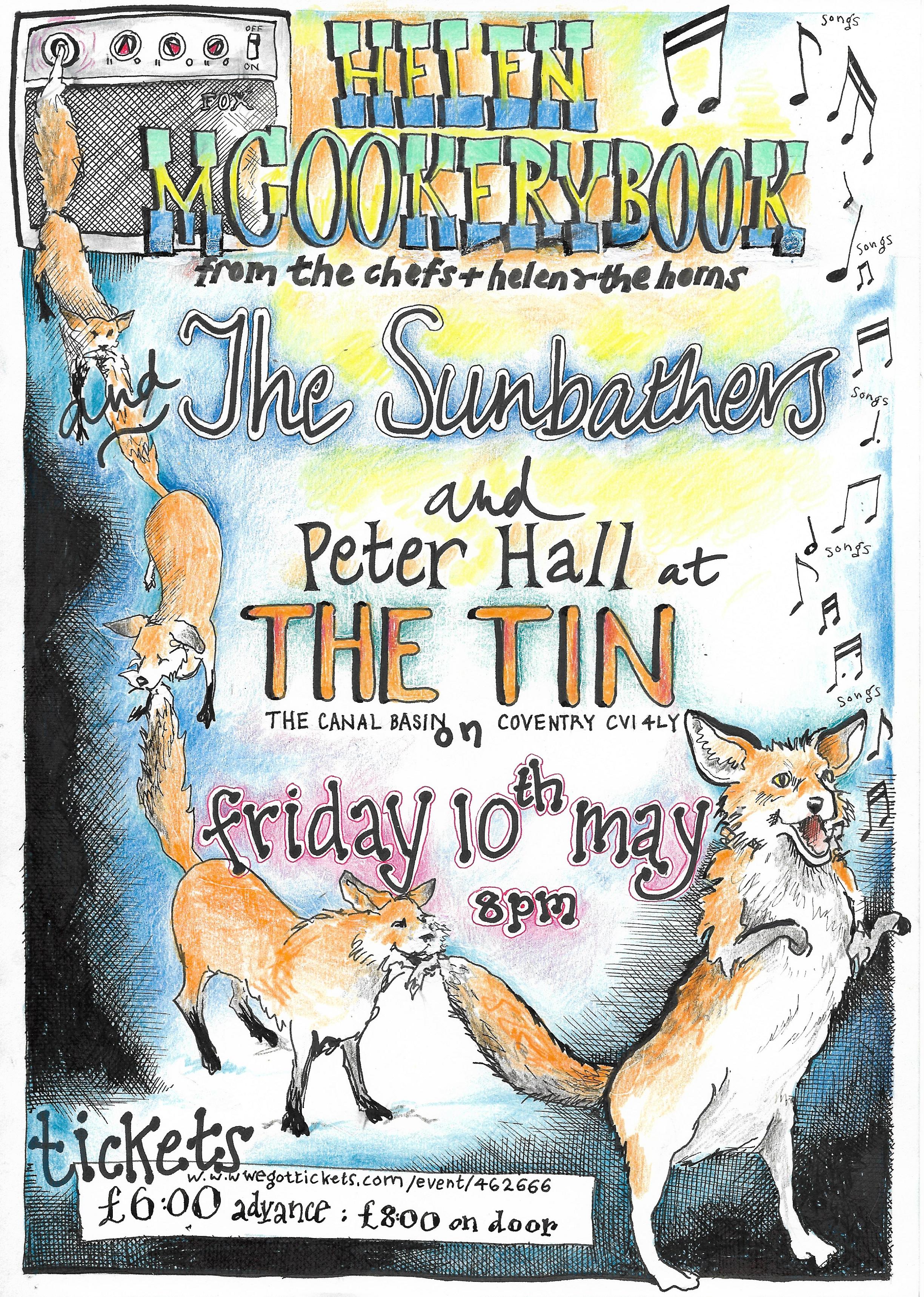 What a beautiful evening's entertainment & soul sustenance of original music at the Tin. Three superb & unique artists & not a single cover version in sight. There truly is some great talent out there & I really hope they get the recognition they deserve: you really would enjoy all three & we were lucky to have them as none of them are regulars on our local live scene.

First up was Peter Hall, a singer songwriter whom headliner Helen McCookerybook encountered on song writing retreat in Scotland she ran. Peter apparently has not been playing live much of late which is a shame: his beautiful songs, performed plaintively & to the accompaniment of his excellent guitar playing, although suffused with melancholia, nevertheless were not the "songs of misery" he modestly called them. Many were from his concept album based around a fire in a North East match factory.

Equally enchanting were second act, the most locally based of the three, the Sunbathers. If Peter was melancholic then Paul (guitar) and Julie (vocals, an astonishing range of percussion & on one number a melodica) were wistful. Their haunting songs touched frequently on love & the seaside. I detected hints of both the Marine Girls & Young Marble Giants in the deceptively simple arrangements & they approached bordering on the faux naive. I was greatly chuffed when Julie afterwards confirmed both bands as major influences: bit of a boost for my reviewing ego.  I certainly look forwards to hearing them live as soon as possible: check out their live dates & several releases on one of their sites:

I have loved Helen's work for a very long time: some readers may remember her work as a member of the Chefs & later her own band Helen & the Horns. After a substantial career break to raise a family and build an impressive academic career, in recent years she has been playing solo & with great collaborators such as Subway Sect's Vic Godard. Ever since the Chefs, Helen's musical persona has been cheery & uplifting on the surface which appeals so much to audiences but at the same time tackling serious issues: whether singing of STDs from a female perspective in the Chefs to tonight when Trump (in the new "21st Century Blues"), the refugee crisis & mental health were sung about as well as about going on dates to the same venue your companion has taken a succession of predecessors.

Oh and two songs about exercise bikes. What other artist offers you that?

Over the years Helen's music has embraced punk (though the Chefs didn't sound much like Sham '69: that they released an EP called "Sweetie" gives a hint to that) through the country/Americana of Helen & the Horns (whose "Snakebite" was a very welcome inclusion) to the rather jazz tinged current material. Played on a beautiful Rickenbacker which drew appreciative sounds from professional musicians present, Helen's mellifluous voice & lyrics which draw you into her songs should not distract you from the excellence of her playing: sprightly & busy, harmonising with the vocal lines.

We were fortunate to have such excellent & individual artists play in our area: I hope we can welcome them all back soon & that as many of you reading this as possible can share what I felt so privileged to experience.

Finally, may I draw your attention to the gig poster which Helen drew herself, another of her many skills & which has attracted a lot of local admiration.

Saturday night was another real landmark for me: my first Saturday evening out since the pandemic struck.
[1 image] END_OF_DOCUMENT_TOKEN_TO_BE_REPLACED

As I've got out more in recent weeks to see live music again, I've been most fortunate to catch some artists whose reputations were made in ...
[9 images] END_OF_DOCUMENT_TOKEN_TO_BE_REPLACED

As anticipated in my interview with Bid last month, yesterday evening saw a magnificent gig at the Tin with the Monochrome Set being supported by The ...
[6 images] END_OF_DOCUMENT_TOKEN_TO_BE_REPLACED