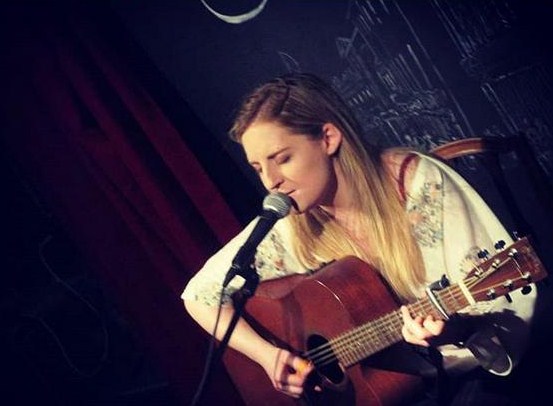 In 1996 Elvis Costello held an event he called "A Case For Song" which was filmed for the BBC: collaborating with a range of other musicians but with great songs at the heart of the show. Well you could say that we had our own "Case for Song" at the Magic Lantern last night with two great local musicians who put all their art & skill into serving real, top quality songs: headliner Kristy Gallacher & support artist Rob Halligan.

The venue has been superbly served by support acts & tonight was yet another. Rob had kindly taken time out from his own "Wild Horses" tour at Kristy's request to play a customised selection of songs of his own & by others.

Voted as best unsigned artist of 2005, Rob had an indie chart hit with "Stand Together" and releases his own material, most recently the 2018 album ‘We All Write The Songs' (look out for a forthcoming review in "Hot Music Live"). He is acclaimed for his live performances & no wonder on last night's evidence: charismatic & engaging, he owned the space on his first visit. Between songs he told amusing stories, explained his songs & even told a few jokes (I promised him not to go too much into these as a rather credulous previous reviewer had solemnly recorded a quip about a non-existent job as being part of his biography). However it was his musical contribution which deserves most of our attention. Apart from a few covers which were sufficiently obscure that even the original artists were unknown to me (thanks Rob), the set was of idiosyncratic & perfectly crafted original songs performed with authentic emotions of great fervour: whether high energy or much tenderness. His excellent guitar playing (on the two instruments he brought, namely ‘Zac', a Moon Dog Auditorium & ‘Bartholemew', a Martin X Series Custom) ranged in appropriate style from highly rhythmic to delicately finger picked, as to serve each song properly. To name a couple of personal highlights: "We Listened to Ray" (an instant earworm) and the manifesto-like "Bigger Than That". Both are straight onto my personal current playlist: and indeed that of Temperance. In fact Kristy is on the latter (well both actually), as are all artists who play there who have Spotify releases.

You can find out more about Rob, his music & where he might be seen live (hopefully he'll be back at the Magic Lantern soon too) at his sites:

What does one say about Kristy which has not been said before? One of the most regarded of Coventry & Warwickshire musicians & of course a featured artist on our own "Hot Music Live Presents". Thanks Kristy. After a super busy personal period which included her wedding to Al (congratulations to both), Kristy has started a period of live performances: you can catch her at

Last night she was on her customary top form, entrancing the full house with a mixture of their favourite Kristy songs (e.g. "Quicksand", "Blood", "Fending Off The Frost"), classy covers (Tori Amos, Shawn Colvin, Indigo Girls & Steely Dan) & as is becoming a Magic Lantern hallmark with its appreciation & attentive audiences, new 2019 songs, so new that they didn't necessarily have names or settled names.

I've said before how privileged I can feel up close to scintillating artists in an intimate setting like this: you feel part of a special experience, almost as if receiving a private concert as the music flows round & through you. So it was on this occasion.

Kristy has honed three major strands of her considerable talent for over a decade now so it is no wonder how awesome she is (note to readers I have never actually used the word "awesome" in a review before as I find it over-used & robbed of any power it might have. I have held it back until now).

Her voice is captivating & I watched with great interest how most of her singing was extremely confidential, very close into the mic, yet leaning back occasionally to go to full power. This really does serve to create a close bond with her audience.

As for her guitar playing: Kristy is one of the very best players you'll see yet for some reason this is not something I hear said as much as I'd like. I mean who on earth would conceive of playing a cover by a band like Steely Dan whose songs are notoriously complex in structure and arrangement, on a single acoustic? Watching her intently from a few feet away, I was taken by the continual movement of her fingers: whatever the song's tempo, they flew around the fretboard, seldom forming the same shape, weaving a web of melodies & harmonies to her voice.

Finally, her writing is of the highest calibre: no doubt there are autobiographical or experiential sources in the mix, but there are leaps of imagination, landscapes from around the world & continual surprising uses of words seldom heard in the popular song. Like her restless playing, Kristy rarely uses repetitions in her words....

If you love "real" songs, lovingly crafted & beautifully played, you really are well advised to seek out either or both of these fine musicians. If there is a case to be made for the song, both made it most eloquently.

Here is a selection of my images from this years Warwick Folk Festival, many of them taken at fringe events around the town, this year as with last ...
[9 images] END_OF_DOCUMENT_TOKEN_TO_BE_REPLACED

What a wonderful night of live music this was, a fine set by Rob Halligan followed by a wonderful performance by one of my favourite ...
[3 images] END_OF_DOCUMENT_TOKEN_TO_BE_REPLACED

Kristy Gallacher will be performing at Temperance, in Leamington on May 3rd with Rob Halligan & Lisa Nowak.
[9 images] END_OF_DOCUMENT_TOKEN_TO_BE_REPLACED

THANK YOU'SSpecial Thank You's ToThe Oak House and in particular Jeff & Sarah for the use of the function room and for looking after us on ...
[12 images] END_OF_DOCUMENT_TOKEN_TO_BE_REPLACED

Kristy's been running a popular open mic for some time at the Open Arms in Coventry.
[0 images] END_OF_DOCUMENT_TOKEN_TO_BE_REPLACED

Well here I am again, this time reviewing not one but two artists on whom I fear I may have already used up my supply of appropriate superlatives in ...
[3 images] END_OF_DOCUMENT_TOKEN_TO_BE_REPLACED