"Drag You Down" by Joe Dolman


"Drag You Down" by Joe Dolman 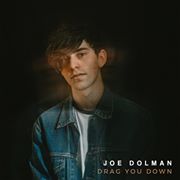 Isn't it a real boost when a local musician whom you've seen often playing the open mics & the local venues & whose work you've appreciated since their teenage years starts to get the same appreciation from wider audiences & grow their audiences and careers? I have said so often recently how blessed we are currently with an exceptional crop of young individual & highly honest writers & performers and several of them are palpably breaking out from our scene

One of the ones right at the head of that pack is of course Joe Dolman. The recent photos he posted of himself on stage in front of a huge audience in Barcelona, the national tour with Tom Clarke, last year's stunning concert in Leamington Parish Church etc etc remind us how far he has already come at only 22 years of age. And today I am really happy to be able to be reviewing his new single, "Drag You Down".

However, another aspect of our local scene which I keep emphasising is how supportive the musicians I cover tend to be of each other. What impressed me among Joe's posted photos as much as the one of the  Barcelona gig was his one of the team behind the single. Yes: it's his song, his single & he is a solo act, yet there is a considerable element of collaboration to great effect and so much involves other local artists covered by "Hot Music Live".

The song was co-written with Kaity Rae (not alas from Warwickshire) and Joe produced it with Matthew Cotterill of our own Speak, Brother who also plays keyboards. In fact Joe & Speak, Brother are playing together in May: on the 12th in Fulford and on the 16th at St Mark's in Coventry.

Harry Green & John Connearn from the Ellipsis contribute bass & guitar respectively & both perform backing vocals. The drums are played by James Burgess & Hannah Woof whose wonderful gig at Temperance I reviewed last week, sings backing vocals. In fact let's not yet leave my theme of local musicians supporting each other: I noted in that review how Joe was among many local artists supporting Hannah who was playing with John Connearn & Ellie Gowers.

So what does all this talent add up to? Well it's Joe's song & all his friends help him realise it without compromising his vision. Tasteful arrangements & production keep him & his voice right to the forefront. As anyone who has followed Joe's music might expect, personal truth and honesty inform the writing & the delivery is appropriately confidential. I would emphasise that although local musicians of this ilk support each other & play with each other a lot, they all seem to back each other up into being true to their own voices rather than all adopting some sort of homogeneous "local sound". What they do seem to all believe it however is letting space & air into the songs & I find myself making that point repeatedly, including right now. Words & phrases hang in the ether & allow our brains to savour them: tasteful licks & beats are clear but in the background, serving the song and not elbowing their way forward to show off. The arrangement does build in a very professional way reaching an eventual emotional climax, but I would imagine Joe will play this solo with just his guitar to good effect too: it is not arrangement-dependent.

Obviously he has a very attractive voice which sells the song (let's hope it gets the airplay it deserves) but there is strength in there meaning he can increase power & emotional punch without having to resort to overblown delivery: which is appropriate given the sense of the lyrics. It is all very well having a great voice but some singers don't half want to show it off whatever they are singing about producing technically impressive but foolishly overwrought performances. Not so in this case I can assure you. Thank goodness too Joe has the taste not to process his singing either. Naturalism again implies honesty in my opinion & personally I find it hard to believe allegedly intimate words when the performance has had the production kitchen sink thrown at it. Again not applicable here.

It has all the right ingredients to be a commercial success: may it be so.

I honestly can't say that I was too surprised by the release today of an acoustic companion  EP to Joe Dolman's most recent ...
[1 image] END_OF_DOCUMENT_TOKEN_TO_BE_REPLACED

It's that moment for Joe Dolman which fortunately comes to some creative artists on a roll when you've last released a single as good as ...
[2 images] END_OF_DOCUMENT_TOKEN_TO_BE_REPLACED

Out today from Joe Dolman is his latest single which rejoices in the title of "Strangers", the follow up to the successful "Real World" which itself ...
[1 image] END_OF_DOCUMENT_TOKEN_TO_BE_REPLACED

It's been above a year since I last got to review a Joe Dolman release (his collaboration with Millie Tilby "Let's Go Home") so it's ...
[1 image] END_OF_DOCUMENT_TOKEN_TO_BE_REPLACED

This is rather an unusual release to be reporting on.
[1 image] END_OF_DOCUMENT_TOKEN_TO_BE_REPLACED

I have recently accused Joe Dolman of being prolific in his output and here he is again with a brand new release a month since I last reviewed him.
[1 image] END_OF_DOCUMENT_TOKEN_TO_BE_REPLACED