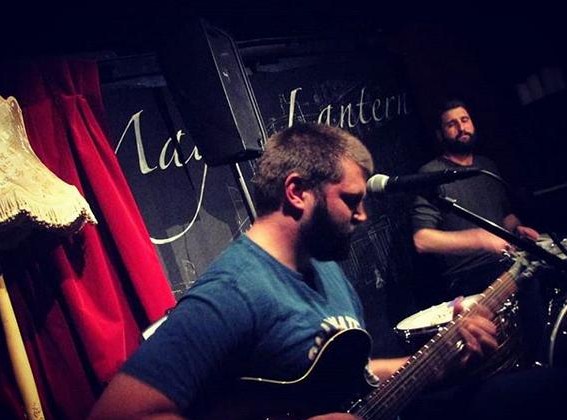 It is always really great to have new talent introduced to you & it is a clear & highly  admirable feature of much of the music scene locally that so many artists support & mentor emerging talent & as with last night, offer them gig opportunities they would not otherwise find easy to obtain.

Stone Bear invited young local guitarist Ollie Lawrence to support them at the Magic Lantern: his very first real gig as distinct from open mic appearances, but not I imagine his last.  Stone Bear were keen to emphasise that in choosing a support act, his was the first name on the list: they hold him in high esteem & now I understand why.

A most accomplished guitarist, I had better get the Hendrix comparisons out of the way early on (virtue of being his first reviewer): I imagine others will draw the same parallels as he uses a similar approach< a very percussive player his fingers keep up almost incessant riffing with occasional chords & solos. Playing with a loud distorted sound, which was very powerful in such a small space, his singing was at times rather difficult to hear (something to work on) which was a shame as he writes his own material & the lyrics did seem interesting. His voice perhaps owes something to the style of Prince but also there are Steve Winwood soul echoes in there: the guitar sound may be quite a rock one but he does keep it pretty funky too. Playing despite a damaged finger (not good in such a dynamic player I'd imagine), Ollie demonstrated a great deal of confidence in his playing even if he had understandably expressed some trepidation.

Stone Bear (David John on guitar/vocals & Jeff Dennis on drums) are vastly more experienced of course, and one of the most respected of local live acts, but the irony is that although often a pretty loud duo themselves, had opted for a style on the night much more laid back than their support act.

This was not wholly to do with adjusting their set to the more intimate space. They have declared that 2019 is going to be a year for a new angle for the band with David adopting more finger picking & writing material which reflects this. Jeff's use of brushes & softer techniques may have been to do with the room but it certainly fitted their newer material & allowed, for example, me to really appreciate what a precise & inventive player he is. The same level of scrutiny of course applies to David under such circumstances & I think it offers them extra chances to show what fine & subtle musicians they are. The good crowd at the Magic Lantern certainly showed their appreciation.

As noted, the set tended towards newer original material (although several of their trademark roots blues covers were also performed) including the latest single "Ole Cherry Tree", "Woke Up This Mornin" (their most recently released track) and a track so recently composed as to be yet nameless. This is a really interesting direction for them to develop into & fits really well with some experiments in that vein on their debut album & which featured in the set, such as the enci=ore "Broken Stones".

It seems almost unreal and a bit transgressive to find myself writing a live review after so many months of reviewing the recorded activities of ...
[3 images] END_OF_DOCUMENT_TOKEN_TO_BE_REPLACED

A moment of pleasure, the more appreciated because it was unexpected, hit me last evening with the news that Stone Bear have released a new album, ...
[1 image] END_OF_DOCUMENT_TOKEN_TO_BE_REPLACED

We are lucky to have more than our fair share of excellent blues practitioners locally: not only do they all possess an obvious love of the form as ...
[1 image] END_OF_DOCUMENT_TOKEN_TO_BE_REPLACED

Readers may well (I hope) remember   from an earlier review, my enthusiasm for the live act of Stone Bear.
[1 image] END_OF_DOCUMENT_TOKEN_TO_BE_REPLACED

Some of you may have noticed a gig on at The Squirrel in Coventry on Saturday 21st October entitled "Anthony Harty featuring Sam McNulty and ...
[1 image] END_OF_DOCUMENT_TOKEN_TO_BE_REPLACED

Well here I am again, this time reviewing not one but two artists on whom I fear I may have already used up my supply of appropriate superlatives in ...
[3 images] END_OF_DOCUMENT_TOKEN_TO_BE_REPLACED