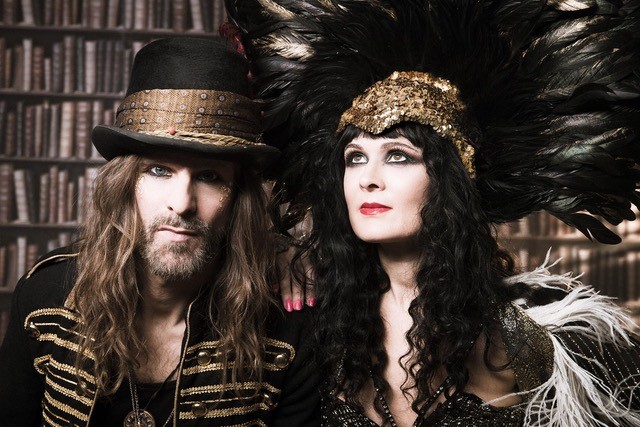 This April, GOLDRAY will make their long-awaited return with a string of UK shows to preview a brand new album that lies on the horizon.

Set for release later this year, 'Feel The Change' will follow the band's masterful debut album ‘Rising', which was released in 2017 via Akashic Records. Also featuring guest performances from the likes of Andy Treacey (Faithless) and Paul Winter-Hart (Kula Shaker) on drums, ‘Rising' garnered critical acclaim in major rock titles, with Classic Rock Magazine drawing parallels with the likes of The Doors, Cream and Pink Floyd, and sister magazine PROG referencing comparisons to Zeppelin and Kate Bush, plus nationwide radio support from BBC Introducing & Planet Rock.

Goldray have enjoyed a busy and varied live schedule over the last couple of years that saw them play the likes of Glastonbury, Bestival, Download Festival, Camden Rocks Festival, Hard Rock Hell, Ramblin' Man Fair, Glastonbury Fringe and HRH Prog, as well as support the likes of Motorpsycho and the Von Hertzen Brothers.

Opting to take some down time in June of last year, the band decamped to the illustrious Livingstone Studios to begin laying down what would become the follow-up to their debut. Working once again with Brit Award-winning producer Pedro Ferreira (The Darkness, Therapy?, Enter Shikari), the band recorded the bones of the new output there, before spending the ensuing months painstakingly honing the results into their upcoming release: ‘Feel The Change'.

"I'm a bit of a b**tard for perfection really and we've spent a long time really making sure all the parts of the record fitted properly." says Kenwyn of the album.

"To be honest it took us nearly 6 years to record the first Goldray album. And it's taken us just about a year to make this new one, so considering how I tend to go into things I feel quite happy with the rate of progress!"

Kenwyn House initially teamed up with vocalist Leah Rasmussen way back in 2010. With a kindred passion for the disparate and wonderful sounds of the late-sixties and early-seventies, the pair shared a vision to blend psych and prog experimental arrangements of the era into their own creations under the guise of their Goldray project, with upcoming LP ‘Feel The Change' promising further explorations of this realm.

"There's as much of a stoner rock, Prog and blues vibe on the new record as there is psych, it ticks all of those categories" says Kenwyn of the new material, "That era between 1965 - 1975 is very dear to me and as a musician I wear my influences on my sleeve. There are probably more singles and more radio friendly elements on this record, not deliberately so but that seem to be the way our songwriting has gone, there's probably a few more foot stompers, the first album was quite arty and psych and this one still keeps that element but has a bit more of a bums on seats kinda vibe about it too!"

Although the release date of the album is still TBC, those eager to get a sneak-peak ahead of the pack are guaranteed to hear a healthy amount at the upcoming live shows this April. After a slight re-shuffle of members since the release of ‘Rising', the upcoming shows will also see a new-look line up joining Kenwyn and Leah on stage, including the highly talented new drummer Johnny Brister (who also plays throughout ‘Feel The Change'), plus sought-after session bassist Colin Parkinson. With an exhilarating new album at the ready and a zest for the live stage, these upcoming live dates are not to be missed:

"I'm really looking forward to it" says Kenwyn of the tour, "God yeah, it's what you live for as a musician really. The actual act of playing in the moment those songs you've created. It's the reason why I got into it in the first place, why I got in bands, to play music, play guitar - I'm really looking forward to it. having a good gig is the greatest high, it's an incredible amount of effort to get everything together as well as possible at that professional level musically; it takes everything really but it's so worth it. It's the best buzz ever and I've tried a few buzzes in my time…"

GOLDRAY WILL PLAY THE FOLLOWING UK DATES THIS APRIL

Tickets on sale now from: www.goldrayband.com

FM - THIRTEEN - new album out now LP / CD / digital (Frontiers)"Another demonstration of how FM write better songs than anyone else in their ...
[3 images] END_OF_DOCUMENT_TOKEN_TO_BE_REPLACED