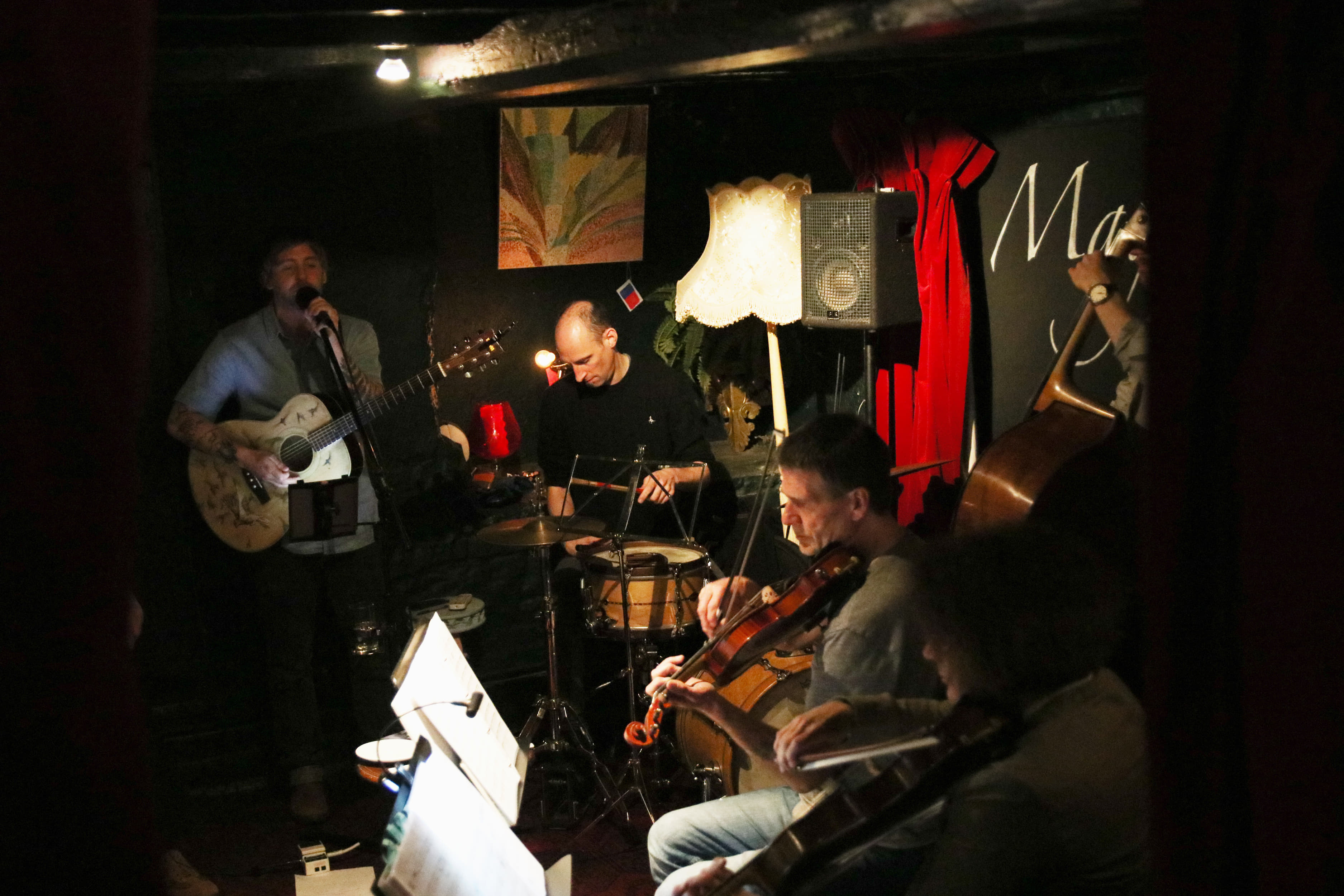 Congratulations: you are about to get a double review. Since the Mechanicals Band kindly played the entirety of their new "Miscellany #1" EP (in order too) yesterday at the Magic Lantern, it seems efficient & appropriate to describe both at the same time.

The Mechanicals do like to keep their audience surprised & delighted. Starting off as being intimately linked to the work of Shakespeare, the initial  portion of their first set of this latest gig was dedicated to Philip Larkin: specifically in playing part of a suite of pieces specially created for a performance as part of the SHOOT Festival : both settings of his poetry & pure instrumentals. One such was "High Windows" composed by violin player Jools Street & they were joined by their friend Steve who will be taking the part of Larkin & who recited the poem of that name.  Other songs included a setting of "This Be The Verse" (as Wes put it, rather ironically given that it was Mothering Sunday & the poem opens with the well known musing of the poet on parents) and "Long Lion Days", one of my favourites of their newer material. You can join them for this suite in full at the Tin on Sunday 7th April from 1700 (https://www.coventryshootfestival.com/)

After the Larkin material, the first set was rounded off with songs from their first album, "Exit, Pursued by a Bear": viola player Katrin Gilbert's composition "The Water is Wide" & settings of "Ophelia's Song" and John Masefield's "Cargoes"

The second part was chiefly the complete performance of the new EP (available on all digital platforms and now on the Temperance playlist too) as already mentioned and so I'll take the opportunity to discuss the songs on it as promised.

First up is/was W B Yeats'  "Meditation of an Old Fisherman" delivered in a sympathetic elegiac form & this really sets the tone for the whole EP. Generally, two themes emerge in hindsight from the first album. Firstly, those lyrics are generally well known to  listeners: thus one reacts to the beauty & appropriateness of the settings and arrangements & delights in them. Secondly, the majority of the words are by a single writer. It is a Shakespearean album with some additions. This new EP is a genuine miscellany with each track, carefully selected by Wes Finch  with the aim of both touching our emotions & being suitable for the Mechanicals method,  originally written by a different writer & moreover with the obvious exception of Yeats, not remotely as well known as Shakespeare nor Masefield (or maybe I'm just not cultured enough??). Thus no single writer dominates but also, crucially, the Mechanicals themselves (and in addition to Jools & Katrin and singer/guitarist Wes, the band features double bass player John Parker and drummer/percussionist Ben Haines) inhabit this record more and hence the tracks sound like their own songs. Even this one by the most famous of the poets fits their sound and character snugly.

The second track, the personally nostalgic & perfectly evoked in detail "Recuerdo" by Edna St. Vincent Millay sounds just like the sort of narrative tales Wes  writes so compellingly in his solo work. As the protagonists of this song disembark their ferry and make their way back home by the turn of the last century New York subway, via an act of charity, you might imagine them encountering the haunted narrator of "Jackie's Stone".

"Time You Old Gipsy Man" by Ralph Hodgson came next (and still does if you have the record) Fittingly this jigs along to fiddle play suggested by the subject and switches from the melancholia infusing its predecessors into the first dance song on the EP, while recalling somewhat in its imagery the aforementioned "Cargoes"

"Along the Road" by Robert Browning Hamilton is the work of one whose name while reminiscent of a famous poet (I wonder how often mistakes are made?) is not familiar with me: so thanks to the band for the introduction. A stately waltz of a song, it takes the record back to the philosophy of its opening track.

Finally, but far from last in quality or impact is "Ode" by Arthur O'Shaughnessy, which might be more familiar from its opening "We Are the Music Makers" line (how very apt: can't have been a difficult decision to set this one) and we are back into dancing mood. Probably the most radio friendly song, if the Mechanicals could be considered "pop", I gather this has broken the airplay duck for the record on local BBC. Certainly it's an ear worm (speaking personally) and one I look forward to staying in the set for a long time.

Once the record was played, the band were scheduled to finish the gig but they pulled more impromptu delights out of their repertoire by popular demand including a new poetic setting and finally an infectious  zydeco instrumental.

This is a venue for playing new material: it is also a venue where audience/performer barriers barely exist and the bond this afternoon was palpable with ongoing chatter & jokes as well as applause and even a box of chocolates being communally shared around as the one aspect of this being a sort of record launch. It was a delightful part of a sunny Spring Sunday afternoon on a day of celebration with such skilled & popular musicians clearly enjoying themselves as much as their guests. Catch them at the Tin if you can, otherwise they should be back at the Magic Lantern on another Sunday afternoon this Summer.

We cover some excellent artists in the magazine who produce some great material.
[1 image] END_OF_DOCUMENT_TOKEN_TO_BE_REPLACED

One of the final formal gigs I shall attend in 2019 was also one of the best: the highest possible levels of musicianship but even more importantly ...
[2 images] END_OF_DOCUMENT_TOKEN_TO_BE_REPLACED

Occasionally I've been able to review for "Hot Music Live" an event which involves but is not limited to music: a particular pleasure.
[7 images] END_OF_DOCUMENT_TOKEN_TO_BE_REPLACED

Well here I am again, this time reviewing not one but two artists on whom I fear I may have already used up my supply of appropriate superlatives in ...
[3 images] END_OF_DOCUMENT_TOKEN_TO_BE_REPLACED

It's great to preview the 2019 SHOOT Festival which offers "a platform for Coventry & Warwickshire's emerging artists to shoot from".
[1 image] END_OF_DOCUMENT_TOKEN_TO_BE_REPLACED

The gig at the Magic Lantern last night was described by venue creator & owner Adrian Gains as "one of the best nights we have had so far.
[7 images] END_OF_DOCUMENT_TOKEN_TO_BE_REPLACED