"Beauty Scarred" EP by King of the Alps 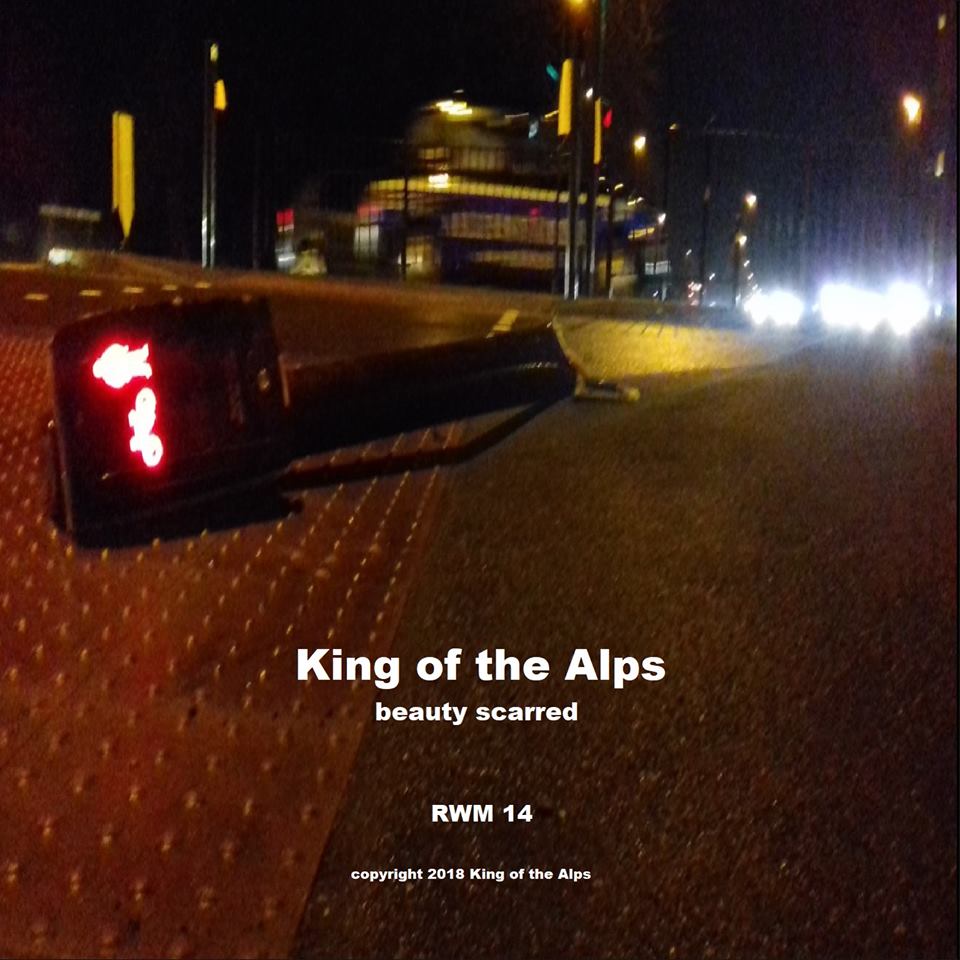 This is something of a record for me (pun intended): I am reviewing an EP which I have been enjoying for over four months & now it is on the brink of release (on Monday April 1st) I can share my enthusiasm with you all at last.

In their way I suppose that the artists in question, King of the Alps, are one of our area's secrets too. Apart from recording EPs which they release quite some time after creation, they play live both  much less frequently than one could wish & then in a manner which epitomises "low key".

One very good reason for the delay though in releasing the EP is that they take as much care to make their videos as original as possible as they do their songs and they've been working hard on these.

The first video of a song off the new "Beauty Scarred" EP, namely "Beauty of the Rain" can be found at https://www.youtube.com/watch?v=S46mSdDlt-w  and there are more still to come.

King of the Alps are (for this EP at least) writer, singer, producer & multi-instrumentalist Paul Ingram working with his long term collaborator bassist Simon Ward. They are joined by guests (and these are special guests indeed which gives you a clue as to the respect in which they are held) Ellie Gowers on "Beauty of the Rain" and Izzie Derry on "Helter Skelter".

I reviewed their 2018 album "Matters of the Heart" exactly a year ago tomorrow in this maazine. As I said then, the title summed up the content. I also said "This is an album to really listen to. It is beautiful & agreeable on the ear, but it asks questions of the listener & you'll hear new things on repeated plays. It is a "grown up" set of songs & in some ways may be a series of Paul's reflections rather than "answers" to questions of matters of the heart. Are there any such answers? Maybe not, but King of the Alps are kind enough to explore the ambiguities, enigmas & paradoxes with us." My first reaction to hearing the songs on "Beauty Scarred" was that they took the album themes I detected last year & went further with them: a sort of "Matters of the Heart Plus". I put this to Paul & he seemed to understand what I meant by that. I interpreted his response as agreeing with that assessment but he could have been being polite for such is his nature. At any rate I find these new songs a little more disturbing in probing the listener and a slightly enhanced sense of emotional unease. The melodies have moments of anxiety to match the words.

"Beauty of the Rain" is certainly of that ilk & although at one level the words & video do quite rightly describe the weather phenomenon in question as having beauty, there always lie the questions of whether it's some sort of metaphor too... "pleasure & pain" are cited. Ellie's ethereal vocals, while undeniably beautiful, reinforce this: they are wordless & evoke some sort of power of nature. At least to me. The tune jerks around like prime Talking Heads.

"Helter Skelter" while being noticeably less edgy in execution than its predecessor, replaces that feeling with a wistfulness. The earlier album's references to being in a bubble resurface and Izzie sings of both being trapped on a circular train line & connects "beauty" with "suffering". You get the picture.

"Love in a Cage" and "Scarred Art' both feature only the core alpine duo, Simon's great pulsating bass underpinning all of Paul's elements. Again, the songs are exploring the wilder & bumpier emotional terrain but all against melodic backdrops. The former yearns in a manner rather like Kevin Rowland: providing he had been backed Echo & the Bunnymen. The latter  has an interesting mix of chiming guitar & synth (and goes a bit Hispanic later) and is the closest the EP has to a title track, reiterating the classic beauty/pain dichotomy which has led to so much great music but which is seldom expressed with such a clear juxtaposition.

I look forward to hearing these songs live (with or without the guests who obviously may not be readily available for gigs), but I warn you, spotting a King of the Alps performance requires great vigilance usually..... they are rare gems indeed

Last night was another little milestone for me: my first pub-based gig for two years.
[3 images] END_OF_DOCUMENT_TOKEN_TO_BE_REPLACED

Regular readers will need no reminding of my admiration for that subtle and highly original band King of the Alps.
[1 image] END_OF_DOCUMENT_TOKEN_TO_BE_REPLACED

In one of those interesting serendipities which real life offers us occasionally, not twenty four hours after reviewing the debut solo single by King ...
[1 image] END_OF_DOCUMENT_TOKEN_TO_BE_REPLACED

It was only yesterday when Facebook reminded me that it was exactly twelve months since I had last see King of the Alps play live.
[1 image] END_OF_DOCUMENT_TOKEN_TO_BE_REPLACED

Every so often, I enthuse in a review for "Hot Music Live" over the privileges of being able to do so: fairly obviously hearing wonderful & original ...
[2 images] END_OF_DOCUMENT_TOKEN_TO_BE_REPLACED