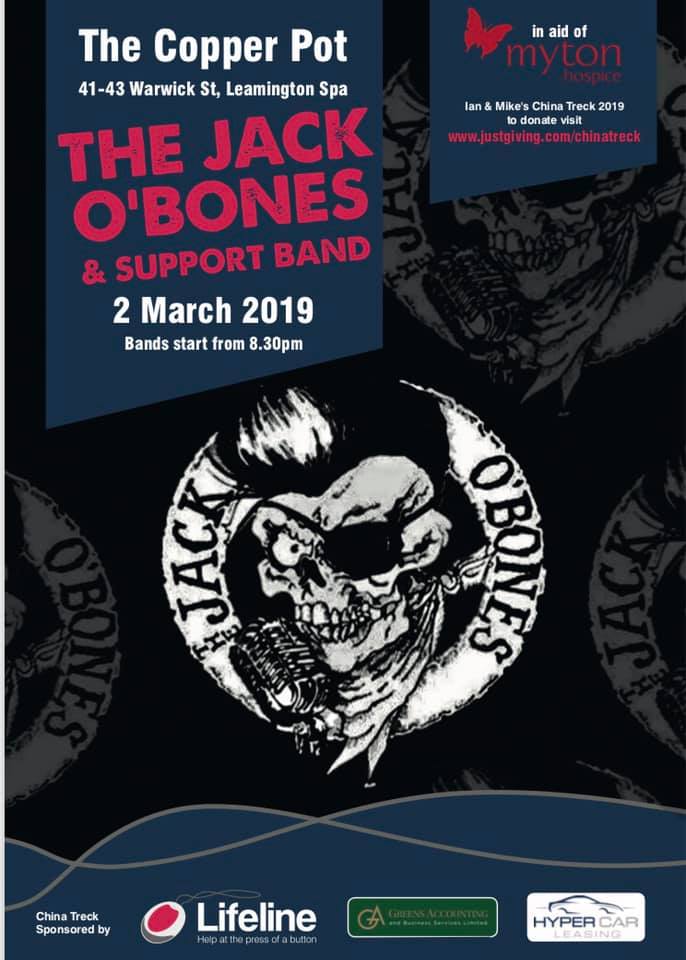 What a difference a day makes: after the intimate & cool jazz I experienced on Friday night with the Jazz Apples at the Magic Lantern, twenty-fours later I was at a very different gig: the ‘Great Walk of China Charity Walk' (for Myton Hospice)  fundraiser at the Copper Pot featuring two "Hot Music Live Presents" stars Taylor-Louise ("Put Into Words") & the Jack O'Bones ("I Ain't No Hipster"). The quality was not different you'll be pleased to hear, but the venue, audience & volume certainly were.

I only reviewed Taylor-Louise & her band, Kev Stanley (drums) and Tom Gedney (guitar), only a couple of weeks ago yet their performance last night does require fresh attention. The cross over between the set at the Copper Pot & the previous acoustic one at Temperance was significant & both included the single "Blessed With a Curse" (also reviewed in "Hot Music Live"), to be released at the end of the week. However, despite the similarities of musicians, instruments & songs, the approach was far more rocky: even with acoustic guitars. I marvel at the skill of writing songs which work well in a range of settings & arrangements & Taylor-Louise certainly possesses this skill. I put this to her & she modestly put it down to the arranging but I still think that many songs are arrangement specific & to write material capable of working so well loud & quiet, with many instruments & with few is indeed a blessing.

Taylor-Louise is on a real roll currently with new material being written all the time (watch out for new releases throughout 2019) & her set favoured her newer songs which added a particular dynamism to a set played with fervour as well as her usual passion & commitment. While the acoustic gig had featured her holding back her powerful singing for effect to be unleashed strategically, last night gave scope for its sheer awesome force  to be deployed much more often: most impressively.

I wonder how many people in our area would cite among our local acts with an international reputation headliners Jack O'Bones? I think that's a huge shame & an unfairness. Admittedly artists within more underground genres (in this case psychobilly) do slip off the mainstream radar, but to me great music is great music & there is much that would appeal to people prepared to give them a listen. The term tends to suggest mayhem & craziness (not necessarily untrue in either the songs nor audience reaction) but throughout there is not just humour but good humour (hey: these guys are playing a charity event after all). Their gigs are just plain enjoyable, whether you belong to their hardcore fanbase (there in number), other pub clientele or even passers-by in the street (I'm not joking: Paul Harwood had deliberately set the gig up by the Copper Pot window to attract attention outside & I watched several passers-by breaking into dance). There was general dancing & toe tapping at least (my personal prize would go to Taylor-Louise/Chalk Drawings drummer Kev Stanley for his dancing to ‘Ubangi Stomp').

If you are in a three piece psychobilly band there is nowhere to hide musically. The genre style may seem wild but it is based upon a really rigorous & disciplined playing. It is no wonder that Jack O'Bones are in such demand at festivals & venues across Europe. Guitarist Mark Bending has a lot to do: there is the Link Wray type low string riffing, manic rhythm playing & blistering trebly solos: and the need to switch between each in every single song at need. Which he performs with great aplomb. Bassplayer Paul Harwood is obliged to take lead vocals on songs which also require him to play furious and constant runs on his stand up (and wittily customised) bass. Behind them, Terry Cardwell has the job on the drums to drive the whole affair  with a constant & complex beat, which he performed absolutely perfectly with a level of attack which while it added much to the performance must get him through a lot of drumskins in a season....

Jack O'Bones don't play around here as often as they play further afield: that is less through choice than lack of opportunity. I urge you to check them out. Their beat & songs are infectious & I guarantee a great time.