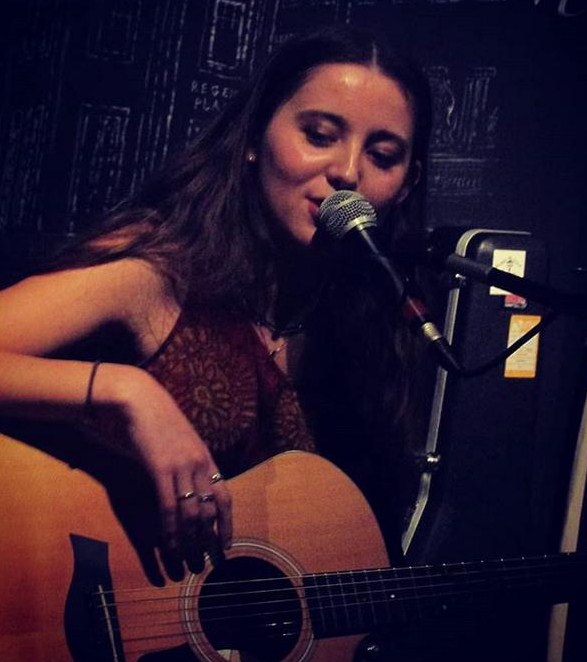 Under normal circumstances, reviewing, or attempting to review, precisely the same musicians I had less than four months ago (see my review on 18th November 2018) might throw some problems up: what on earth might I say now that I hadn't said before?

Well some things hadn't changed: the quality of performances & writing for one (or two). Both Hannah Woof & Izzie Derry had come back to the Magic Lantern after public demand following their previous & triumphant concert.

So what had changed? Well quite a lot actually: some general aspects & quite a lot of detail.

In no especial order then...

Firstly, I had been anticipating the debut in concert of the Magic Lantern's restored vintage Dale Forty piano & the excellent use made of it by both Hannah & Izzie's keyboard playing comrade Herbie Walker added really effective new tones to the palette of their work. Equally, the fact that Hannah displayed her considerable talents on both guitar & piano this time (in November she had concentrated on playing guitar) added to the appreciation of the audience for the range of her artistry. On both instruments she took a similar approach: leaving plenty of space to let notes ring out,  her great voice to take the predominant role with the melody & to emphasise her excellent lyrics (her piano playing reminded me of John Lennon's by the by). I know I keep on saying in my reviews how blessed we are with such diversity of individual songwriting & performance voices but I really can't escape saying it again about Hannah: her songs really do have a unique stamp & she is yet another current local writer who seems unable to write a cliché. Why we have so many currently about is a bit of a mystery, but a good one & one to be celebrated. Quite a long way from the formulaic nature of so much in the charts.....

The other instrument making a sort of Magic Lantern debut was Izzie's playing of her Mum's mandolin on one number & again this added to the diversity of the texture & like her guitar playing made my photography a challenge: she has very fast hands which tend to appear as a blur....

The next point I think would be the evident joy of all the musicians (apart from Izzie, Hannah & Herbie, the others playing were Jake Morris who played bass guitar with Izzie & Ellie Timlin who joined her  on several numbers to add her vocal harmonies) in playing their songs before such an appreciative audience in such an intimate space. Fantastic as they were in November, I detected an extra level of zest & glee in all of them: pretty much reinforced by the higher level of repartee between songs. All of them are splendid musicians & it was a joy to see them cut loose in such a way with fluid & imaginative basslines, honky tonking on the piano etc etc. How on earth Izzie manages such amazing singing while playing such innovative guitar lines and working a tambourine on her left foot & a stomp box on her right is beyond my comprehension.

I suppose the other main difference was the setlist: yes there was overlap with November (both acts have crowd pleasers they have to keep of course) but there were significant songs played this time which had not been played before: some in Hannah's set deriving from her playing piano, those in Izzie's being newer ones including those recorded live (by Jake) last month in a Hove church for release very soon..

Once again encores were devoutly requested & delivered & I'm delighted to say that both Hannah & Izzie have responded to popular demand and will return to the Magic Lantern in coming months (watch this space for details): each headlining her own show.

You can next catch Izzie (with her full band) at the Tin in Coventry in May  as part of her national tour promoting the new EP.

If you visit Temperance in the meantime for coffee, tea, cake or sandwiches, have a listen to the music too: Izzie & Hannah (as well as a host of other musicians who have played or are booked to play the Magic Lantern) feature on their Spotify playlist as does Herbie & Ellie's current single "Get To You"

I do like being taken be surprised by music (to be honest I'm not sure I enjoy reviewing music which fails in some way to do so) and I hope I am ...
[1 image] END_OF_DOCUMENT_TOKEN_TO_BE_REPLACED

If you are anything like me, among the myriad challenges to our communities currently being presented, the probable curtailment of live music for ...
[4 images] END_OF_DOCUMENT_TOKEN_TO_BE_REPLACED

One conundrum I face with reviewing the calibre of artist I tend to focus on (it's an enjoyable challenge really) is how to handle it when ...
[1 image] END_OF_DOCUMENT_TOKEN_TO_BE_REPLACED

It's odd: the more reviews you write, the more patterns emerge.
[1 image] END_OF_DOCUMENT_TOKEN_TO_BE_REPLACED

December 12th is a date many people have possibly been looking forwards to or dreading for various reasons.
[1 image] END_OF_DOCUMENT_TOKEN_TO_BE_REPLACED

I find myself here writing a review which I had never anticipated.
[1 image] END_OF_DOCUMENT_TOKEN_TO_BE_REPLACED

Well here I am again, this time reviewing not one but two artists on whom I fear I may have already used up my supply of appropriate superlatives in ...
[3 images] END_OF_DOCUMENT_TOKEN_TO_BE_REPLACED