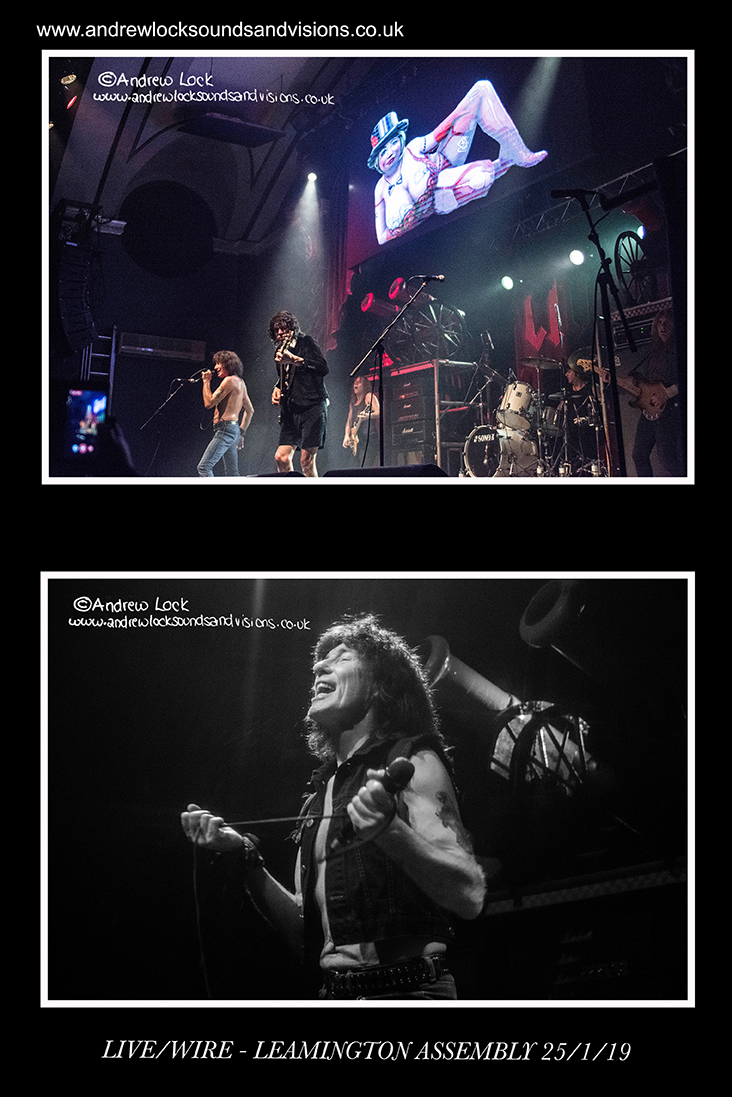 A quality classic rock double header this one with regular Assembly visitors and top AC/DC tribute Live/Wire joined by another fine rock tribute Whitesnake UK and their David Coverdale and co songbook, a perfect Friday night dose of classic rock.
Like headliners Live/Wire Whitesnake UK do full justice to their particular musical heroes and they mix a little of the earlier blues rock era with a large slice of the bands highly successful 80's hair metal days.
The vocalist captures Mr Coverdale's cheeky charm (plenty of cries of "ere's a song for ya!!!!") as well as having the musical chops for the job, the drummer was amazing keeping the beat while constantly throwing his sticks in the air and the whole band brought the music of the mighty Snake to life.
It was classic after classic and after opening with a belting ‘Bad Boys' the set included big hitters ‘Don't Break My Heart Again', ‘Fool For Your Loving' and ‘Here I Go Again'.
On the epic side we had a glorious ‘Crying In The Rain' and the Goliath that is ‘Still Of The Night' which with that monstrously, heavy main riff was a headbangers delight.
A really well chosen set, very well played and the crowd including me loved it.
Live/Wire always deliver and of course give fans the experience of a Bon Scott era AC/DC show (a treat for me personally as I never got to see the the mighty Mr. Scott in action) and a Brian Johnson era gig, track wise you pretty much know what you are going to get but never is the phrase "don't fix it if it isn't broken" apply more.
Stage set wise they continually work on making the show bigger with a few changes here and there and this time around the band had a large back screen over the stage hence we had a cartoon image of a ‘shall we say lady of the larger variety' during ‘Whole Lotta Rosie', various extreme weather imagery for a pulsating ‘Thunderstruck' and the famous bell appeared for ‘Hells Bells'.
A 2 hour all action show with firstly our denim clad Bon running on stage for the likes of ‘Dirty Deeds' Done Dirt Cheap, Riff Raff' and ‘Shot Down In Flames' before he (by this time bare chested) left the stage midway through the set to be replaced by possibly the most famous cap in rock as our Brian for the evening prowled the stage and gave us the best of the Johnson years.
Back In Black is an important album of course in the AC/DC cannon (sorry!) so we had as well as that tolling bell, ‘Shoot To Thrill', ‘You Shook Me All Night Long' and of course the mighty title track.
So pleased they have reintroduced the Black Ice number ‘War Machine' to the set as it is for me one of the bands most powerful up tempo rockers with a thunderous main riff, also a bit of a twist as Angus did his famous strip during a lull in the action (usually if memory serves me right it takes place during Bad Boy Boggie).
Towards the end of the set both singers took the stage but due to the last train home I missed the cannons roaring at the finale but managed to catch them swapping lead vocals on an epic ‘Let There Be Rock' before I caught the rock and roll train (well the 10.59 to Hatton!).
A wonderful evening, one of the best rock tributes bands in the country Live/Wire and their buddies Whitesnake UK looking like they could easily join that list.

AMBER RUN have announced an acoustic live show ‘AMBER RUN UNPLUGGED' at The Assembly, Leamington Spa on 10th May 2022 TICKETS ARE ON SALE NOW ...
[1 image] END_OF_DOCUMENT_TOKEN_TO_BE_REPLACED