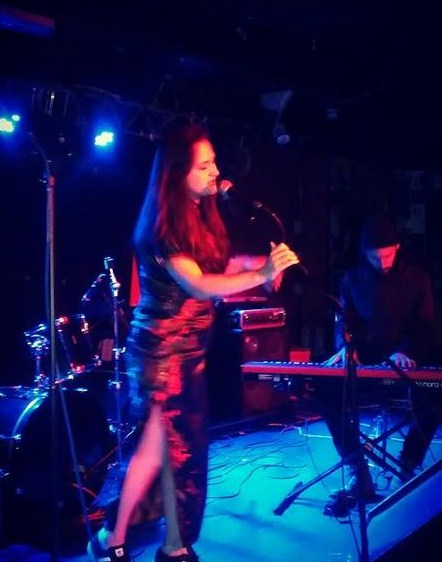 Every Yuletide, Johnny Satsangi of APE Promotions gifts to us is a multi artist gig at the Zephyr Lounge under the "Wrongmas" banner, always promoted with witty & unsettling artwork which reflects the content of the music.

Was 2018 any different? Well no it wasn't as he treated us in the traditional "Wrongmas" style but then again, yes it was as the acts were either new to the event or delivered their material in fresh & innovative ways. Johnny doesn't deal in "same old, same old"

For example, his own band, the mighty & eponymous Satsangi, sandwiched into the heart of the bill, play every Wrongmas yet each time, the setlist varies and frankly so does the tone of the performance. This year quite understandably, the main focus of their set was the recently released masterpiece which is "You Saw Something", yet even so, this did not stop them plunging into their back catalogue inspired by their acoustic set at the album launch. For those who witnessed their extraordinary performance last December when land speed records were in danger, as was the fabric of the building such was the ferocity of their playing, 2018 saw a more tightly leashed power: the ferocity was still on stage, but the set burned with a savage and brooding intensity.

Equally the many fans of Shanade will have been delighted with a performance which even among the many superb ones I've seen ,stood out. You may think that any artist who brings so much integrity and commitment to every gig could not have much room to progress in this way. Not so: even for such a mobile artist (I find her a real challenge to photograph so constant are her movements as she lives her songs) this was quite extraordinary. Accompanied by keyboard player Leo Steeds & with Ben Haines on an equally extraordinary drum box studded with numerous pads (almost worth the price of admission to see that alone), Shanade was liberated from her usual guitar playing & danced around with a joyous abandon which was infectious. This is someone who enjoys performing. Highlight of the set (which included some new unreleased material for 2019 recording) was for many in the audience, one of her best ever songs "Lessons" (which by an interesting coincidence can be downloaded on this magazine's very own album, gratis https://hotmusiclivepresents.bandcamp.com/album/hot-music-live-presents-volume-one)

Of the other three bands on the bill, the Ellipsis & Mara Falls will not require any introduction to anyone reading this I imagine.  The former, one of the more touted of current local bands, got the night started well with an uplifting & engaging set of catchy indie pop, riff centred songs which went down well with the early audience, while the latter, closing the show, demonstrated why their star is very much on the rise. With a well honed theatrical approach to performance, they showed how well they understand the dynamics of playing & how to engage their audience & their songs reflected this: powerful dynamics whether on the rockier & anthemic numbers but also on the quieter ones: a rock ballad in particular was for me a highlight. The only thing I felt was a bit odd was their having a couple of photographers onstage with them throughout much of their set (thankfully I saw no collisions): I respect that it was their decision but it was a bit distracting.

The traditional Johnny Satsangi wild card, the act he loves to bring in which is not known to his audience, was tonight Coventry's Big Sugars. I must admit that I struggled with how to describe their idiosyncratic set: early songs were definitely reminiscent of garage rock & I am indebted to a fellow audience member for her suggestion of "Captain Beefheart": mostly the common thread was sixties alternative rock and I was pleased to hear the ‘Nuggets' classic by the Premieres "Farmer John' get a play. They even finished with a cover of the Slade song. You know which one.

I reviewed (back in November) the most recent single from Satsangi, "World Falling Down" and mentioned a little bit at that time about their ...
[1 image] END_OF_DOCUMENT_TOKEN_TO_BE_REPLACED

Fresh out from Satsangi is "World Falling Down", (their first since they raided their own vaults for the "Don't Want Anything But More" single ...
[1 image] END_OF_DOCUMENT_TOKEN_TO_BE_REPLACED

During these turgid times when there is a distinct danger of every successive day seeming like its predecessor, it's helpful to be surprised now ...
[1 image] END_OF_DOCUMENT_TOKEN_TO_BE_REPLACED

Satsangi, never a band to shirk a challenge nor to be meekly led by fate nor wander aimlessly down roads many others have trodden previously, seem to ...
[1 image] END_OF_DOCUMENT_TOKEN_TO_BE_REPLACED

Well life under lockdown continues to evolve doesn't it: even, or perhaps especially, our musical life.
[1 image] END_OF_DOCUMENT_TOKEN_TO_BE_REPLACED

Some excellent news for lovers of music which dares to be a bit different.
[1 image] END_OF_DOCUMENT_TOKEN_TO_BE_REPLACED