Clemency at the Magic Lantern 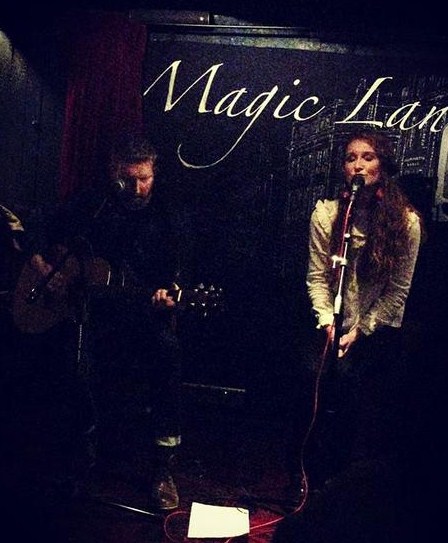 I find myself drifting into describing gigs at the Magic Lantern as "magical": unfortunately the label is accurate. The wonderful musicians I've seen play here such as Izzie Derry, Hannah Woof & the Mechanicals Band have virtuoso acts which are enhanced by the setting & its intimate if not hygge environment: it makes for a very immersive musical experience. However I do take great note of the observations of a well known local musician who was at Izzie's gig & whom I'd like to see play at the Magic Lantern. He expressed to me the perspective from a performer's viewpoint: while the potential for an inspiring gig for them is huge, the fact that unlike a pub gig with some "audience" members ignoring you, talking etc, here, all attention is on the musician(s) and everyone is close up. The pressure to live up to expectations must be high & so confidence & preparation can be key: which says much too about the acts I've seen here, all of whom clearly enjoyed the experience but must have been on top form in these more hidden respects too.

Last night's act, Clemency, expressed their belief at the end that it was their best gig ever, so I imagine the above applies in their case. The prolonged applause & requests for encores suggests that the audience held a similar belief.  Clemency have not been gigging for too long & although I have seen them several times, each previous one has been in the context of a large bill & so a limited set. It was therefore most enjoyable to catch a full set & when I asked her, vocalist & cajon player Nina Bailey confirmed that it was their longest local set, with only gigs on their recent Cornish tour being of comparable length.

In addition to the core original material I had previously heard, Clemency were able to add covers which gave new insights into their breadth of skills & interests. I am in little doubt that the band will increasingly be seen as a vital new voice in the folk scene & many of their originals have as much an American folk & blues feel as they do the classical British ones. However when one gets to hear them cover in a pretty inimitable way songs by the likes of Bob Dylan, Nelly Furtado, Cameo, John Martyn , Cameo and even AC/D C,  you realise that great new music comes from a synthesis of very diverse interests, even if that synthesis also results in the covers having that unique Clemency stamp. The longer set also gave space for what they referred to as "banter" but frankly the amusing between songs chat rose far above that descriptor.

I said "virtuoso" earlier & as noted in my previous reviews of the band's live & recorded work for "Hot Music Live" , both Nina & guitarist/vocalist Ben Clempson fall into this class. During an impromptu Q & A midset, one audience member asked about the layers of the songs: which was astute because of course no number has more than four elements yet the rhythmic & melodic outcomes sound complex in terms of arrangements even if the core of the performance is keeping things appearing simple enough for the excellently crafted songs to remain central. Lush harmonies abound: keys & tunings switch in a whirl & the capo on Ben's guitar has quite a journey. Guitar technique aficionados are in for as much of a treat (I was seated next to one) as those lovers of vocal harmonies. A particular favourite of mine was his percussive playing on the wonderful song about a man who has all the whisky (I hope they record that one). Anyone who knows their work will be aware of the single "Man at the Station" but other songs to look out for include "Pillar to Post" which they have kindly allowed us to present on our inaugural "Hot Music Live Presents" album, "Wasted on Me" & "Walk the Land" (you can download "Pillar to Post" for free here by the way:  https://hotmusiclivepresents.bandcamp.com/album/hot-music-live-presents-volume-one)

Sadly it's been a couple of years since I was last able to post an article on the splendid Clemency (it was their February 2020 gig at ...
[4 images] END_OF_DOCUMENT_TOKEN_TO_BE_REPLACED

I expect we all agree that music can actually do things to us & for us: improve our mood & morale, lift our spirits, transform our psyches.
[2 images] END_OF_DOCUMENT_TOKEN_TO_BE_REPLACED

If several of my more recent reviews have been of songs previously unheard by me & some even caught me by surprise with their release, the new single ...
[1 image] END_OF_DOCUMENT_TOKEN_TO_BE_REPLACED

As I was sitting watching Clemency last evening at the Magic Lantern, the thought which went through my head was ‘how lucky I am' to be there ...
[1 image] END_OF_DOCUMENT_TOKEN_TO_BE_REPLACED

Well here I am again, this time reviewing not one but two artists on whom I fear I may have already used up my supply of appropriate superlatives in ...
[3 images] END_OF_DOCUMENT_TOKEN_TO_BE_REPLACED