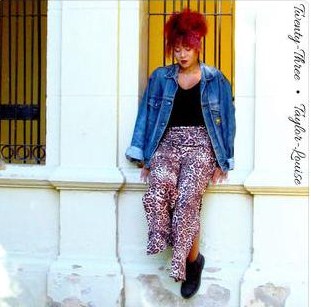 There can be no doubt that anyone who loves local music is united in recognising one of the fastest emerging significant artists from Coventry & Warwickshire, Taylor-Louise, as a star & so it's a real pleasure & honour to review her latest single "Twenty Three".

As I say, Taylor-Louise is receiving acclaim from all quarters. A regular on a range of radio stations & featured in other media, she is one of the hardest working live performers, appearing frequently in local venues, at many festivals (giving her time for great causes) as well as giving huge support to the open mic scene. Chances are that if you follow our music you'll need no introduction from me to her talents. And I haven't yet mentioned all her work coaching & mentoring new artists.

I rather used the word "emerging" above to try to capture the sense of her current career momentum & her rise to prominence within a crowded scene. In fact, not only has she been releasing professionally recorded material for several years, her song writing has already been mature beyond its years too: even her teenage songs betray this in a way few of us managed to look at the world as adolescents.

Hence "Twenty-Three" is a very wise song: you'd not guess it was written by someone her age simply by listening to it. Gently reproachful in a way that seeks to guide the subject rather than simply chide, the song is constructed in a sophisticated way: a great combination of rhythmic sensibility coupled with accessible melody, tastefully & subtly arranged, Taylor-Louise varies her vocal dynamics to good effect throughout the song (and I greatly appreciate the naturalness of her vocal sound which thankfully is not over-processed as far too much is these days) which lasts for a classic single length of 2 minutes 40: how many pop singles these days have the confidence to increase impact by not falling into the trap of repeating the hook a few too many times? "Twenty-Three" says what Taylor-Louise wants to say & then finishes, leaving you wanting more. Classy stuff.

You can check out the video for "Twenty-Three" here:

It's been quite a while since I had the pleasure of reviewing a Taylor-Louise release: in fact it was about eighteen months ago when the title ...
[1 image] END_OF_DOCUMENT_TOKEN_TO_BE_REPLACED

What a fiesta of an evening on Friday at St Patrick's Club in Leamington.
[3 images] END_OF_DOCUMENT_TOKEN_TO_BE_REPLACED

If you are counting, you'll have spotted that the new single "Gone" is the third single to be released from Taylor-Louise's stunning "Black ...
[1 image] END_OF_DOCUMENT_TOKEN_TO_BE_REPLACED

When is "easy listening" not easy listening?Possibly when it is one of those quite rare songwriting approaches where the composer deliberately ...
[1 image] END_OF_DOCUMENT_TOKEN_TO_BE_REPLACED