"You Saw Something" by Satsangi


"You Saw Something" by Satsangi 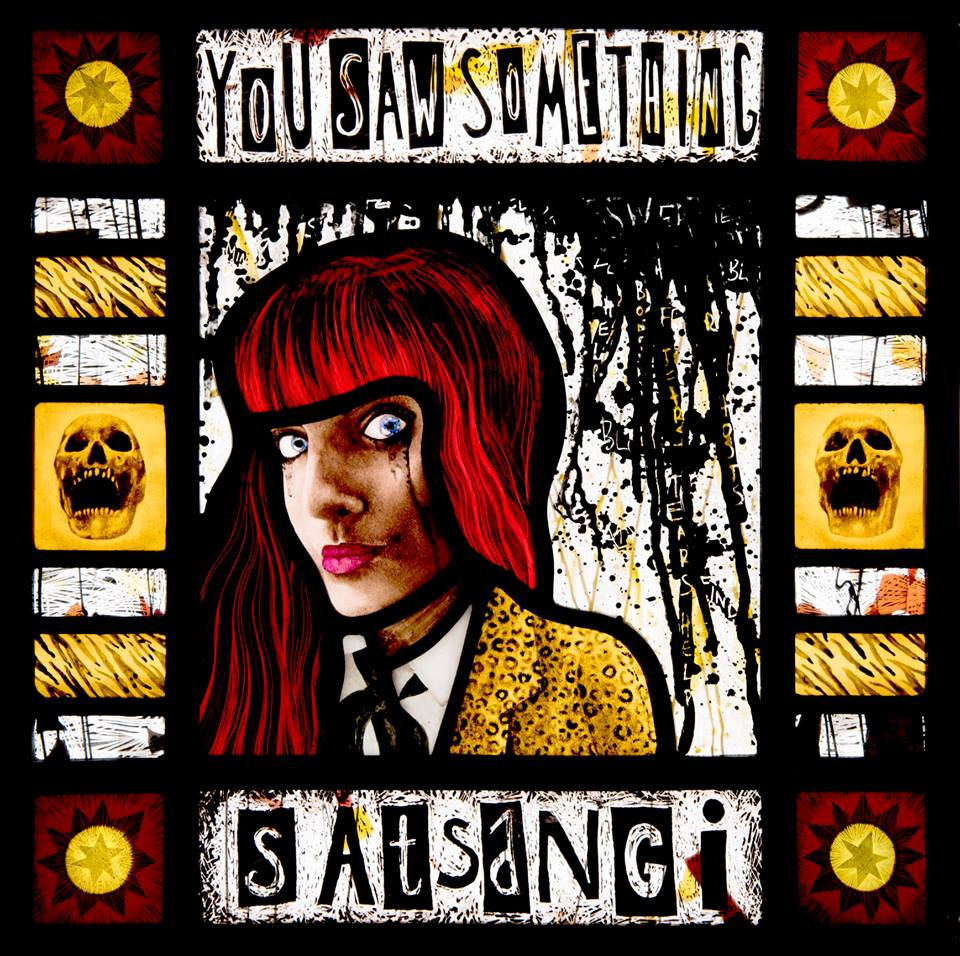 I imagine that I speak for many when I say state that the new Satsangi album has been greatly anticipated by the local music community. You'll not be disappointed. Satsangi never sit on their laurels & although there is some continuity with previous albums, it is a progression rather than sticking to some sort of formula to meet expectations. I suspect that they would find that boring. What is a common thread here is that the power is (on appropriate tracks) that overused word "awesome". Always a powerful & dynamic live group, this set has a raw energy which comes closer than anything previously to capturing that on record.

So to the facts. "You Saw Something" is released on Blood Count Records in both 12" vinyl & digital download formats and is the first Satsangi album since 2016's "Lick My Lungs". Recorded by the band (who if you do not know are Sujatha Menon – vocals, Johnny Herbert - guitar
Dave Holland – guitar, Richard Heath - saxophone/keyboards,  Ben Clempson – bass &
Rob Barratt – drums) with John Rivers at Woodbine Studio in Leamington, the creation of the music dates to the return of the band from a groundbreaking tour to Africa which seems to have been some form of epiphany for them and in their words "the aim was to keep it real, with live performance essential to the recording process and to capture the band's character, personality and energy. The tracks that made the cut, demonstrate the breadth of our influences melding together a sound that is best/has been described as "world influenced pysch-rock-n-roll', made after a night spent on the lash in a Kasbah, breaking up a long haul flight to India."

Fair enough, though anyone expecting a lot of African instrumentation & musical structure doesn't know their Satsangi. Only "Who Do You Love" and "Hallelujah" possess any "in your face" overt Africana so I imagine that the influences were far more subtle & need picking out from both music & lyrics: which is par for the course for their music.

So what of the seven songs on the vinyl release (you get an extra very special one with the digital version)?

Album opener  the majestic & extended title track "You Saw Something " sets us off on our journey  with circling waves of sound creating almost white noise with drums, keyboards & guitars meshing together into one exhilarating soundscape. Regular Satsangi followers will have heard this one live and as I do, loved the clarity of Su Menon's apocalyptic vocals.

"The More I Need You" offers a quieter & contemplative yet uplifting experience Rather unusually for Satsangi it is a love song, (or maybe gives the appearance of one: Satsangi are a subtle lot & can certainly do ambiguity) and features Richard Heath's beautiful classical sax (which reminded me of the late Steve Edgson's solo on the Giraffes track "Come In Out of the Rain") An utterly beautiful new departure for Satsangi.

"Who Do You Love" as already noted boasts a fantastic Arabic style & vibe.  Su's vocal floating above a landscape of buzzing guitars & driving drums cartwheeling away into quieter passages.

"Hallelujah" has for quite some time been a  big live favourite with the most overt Indian musical style on the album (which has been one of Satsangi's long time hallmarks) and this anthem features a sampled intro  presumably from their African adventure.

"Like The Rain" is different again: a swirling organ grants this song a sixties garage vibe with added pop sensibility: great fun and no wonder Satsangi gigs are noted for their stimulation of dancing. This'll certainly get ‘em going.

"Horses" is another song already well established in the live set: a most stately song with great riffing.

The final track on the vinyl album is "Leave Me Mine" and this will be very familiar already to their fans as it has instantly become a real highlight of the live set and may be their signature number if they have such a thing.

Of course anyone who has ever seen the band live will already know the spellbinding majesty of their performances and while in recent weeks they have played alongside internationally renowned artists as Roddy "Radiation" Byers and Dr Feelgood, your next chance to catch them live & hear these songs is on December 15th at the Zephyr Lounge for "Wrongmas 2018" by Johnny's APE Promotions with Shanade, Mara Falls, The Big Sugars and The Ellipsis

One final but crucial thought: I don't usually mention sleeve art but that of this record, created by local stained glass artist Hazza Bee is stunning & matched the quality of the contents: hopefully a little of the glory is reflected in the reproduction here: best buy the album to get maximum effect though.

I reviewed (back in November) the most recent single from Satsangi, "World Falling Down" and mentioned a little bit at that time about their ...
[1 image] END_OF_DOCUMENT_TOKEN_TO_BE_REPLACED

Fresh out from Satsangi is "World Falling Down", (their first since they raided their own vaults for the "Don't Want Anything But More" single ...
[1 image] END_OF_DOCUMENT_TOKEN_TO_BE_REPLACED

During these turgid times when there is a distinct danger of every successive day seeming like its predecessor, it's helpful to be surprised now ...
[1 image] END_OF_DOCUMENT_TOKEN_TO_BE_REPLACED

Satsangi, never a band to shirk a challenge nor to be meekly led by fate nor wander aimlessly down roads many others have trodden previously, seem to ...
[1 image] END_OF_DOCUMENT_TOKEN_TO_BE_REPLACED

Well life under lockdown continues to evolve doesn't it: even, or perhaps especially, our musical life.
[1 image] END_OF_DOCUMENT_TOKEN_TO_BE_REPLACED

Some excellent news for lovers of music which dares to be a bit different.
[1 image] END_OF_DOCUMENT_TOKEN_TO_BE_REPLACED