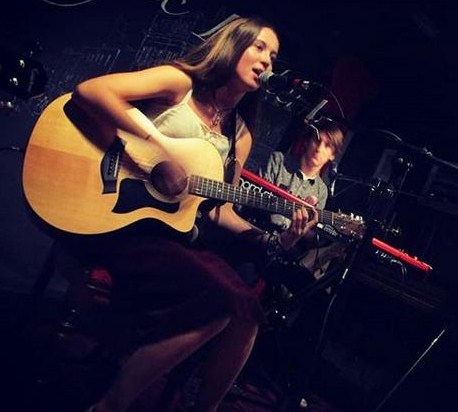 You can keep your headphones & your immersive sound systems. There is no better musical experience than sitting four feet away from a top quality musician (especially when the two in question have two of the most exquisite & haunting voices you might imagine) in an intimate venue like the Magic Lantern.. it's your own private concert experience and the great news is that they are putting on many more such.

On Friday night, I had the pleasure of the first of three successive evenings there (the following day was actually drama: Tell Tale Presents "1918 Local News" & Sunday was the Mechanicals Band plus Caroline Horton which is the subject of its own review) This one was really rather special as two of the finest talents of our area were sharing the same bill: Hannah Woof, followed by headliner Izzie Derry & a pared down version of her band.

"Hot Music Live" readers will need no introduction to these so highly regarded musicians, singers & writers nor did the full house audience "squished" (thanks to Izzie for coining this word) into the venue.

Hannah started the evening off with a short but excellent & moving solo set accompanied only by her own guitar playing & comprising covers by June Carter Cash/Merle Kilgore and Joni Mitchell plus some of her own beautiful compositions, some being from her current "Sleepless Night" EP. Look out for Hannah playing on a bill with the great Joe Dolman (that'll be another double whammy night) at All Saint's Church in Leamington on Friday 7th December.

As noted, the characteristics of the venue meant that Izzie's band was tonight just herself on guitar plus bass (Jake Morris) & Herbie Walker on keyboards: I marvel at how well written her songs are so that she can play them in any format: solo, full band & as tonight. In fact, this has been a skill all her performing life given that her set drew on all eras of her career (feel a bit strange writing this about a 20 year old) from early ones through material from her "Goodbye" album, to several as yet unreleased songs plus one cover version.

While her style is sometimes called "folk", Izzie's work clearly draws on many influences and I can detect country & blues in there (especially on the newer songs) and the audience clearly enjoyed honky tonk piano on one track. In fact the new classification for Izzie songs would appear to be "sassy" (again thanks to Izzie for that word).

"Goodbye" was great: the next album will be greater still.... what with a new Mechanicals' album also on the way, we are in for some treats. And we certainly were treated that night. Thank you to all four musicians. I walked away most uplifted and even the heavy downpour could not dampen that.

I do like being taken be surprised by music (to be honest I'm not sure I enjoy reviewing music which fails in some way to do so) and I hope I am ...
[1 image] END_OF_DOCUMENT_TOKEN_TO_BE_REPLACED

If you are anything like me, among the myriad challenges to our communities currently being presented, the probable curtailment of live music for ...
[4 images] END_OF_DOCUMENT_TOKEN_TO_BE_REPLACED

One conundrum I face with reviewing the calibre of artist I tend to focus on (it's an enjoyable challenge really) is how to handle it when ...
[1 image] END_OF_DOCUMENT_TOKEN_TO_BE_REPLACED

It's odd: the more reviews you write, the more patterns emerge.
[1 image] END_OF_DOCUMENT_TOKEN_TO_BE_REPLACED

December 12th is a date many people have possibly been looking forwards to or dreading for various reasons.
[1 image] END_OF_DOCUMENT_TOKEN_TO_BE_REPLACED

I find myself here writing a review which I had never anticipated.
[1 image] END_OF_DOCUMENT_TOKEN_TO_BE_REPLACED

Well here I am again, this time reviewing not one but two artists on whom I fear I may have already used up my supply of appropriate superlatives in ...
[3 images] END_OF_DOCUMENT_TOKEN_TO_BE_REPLACED