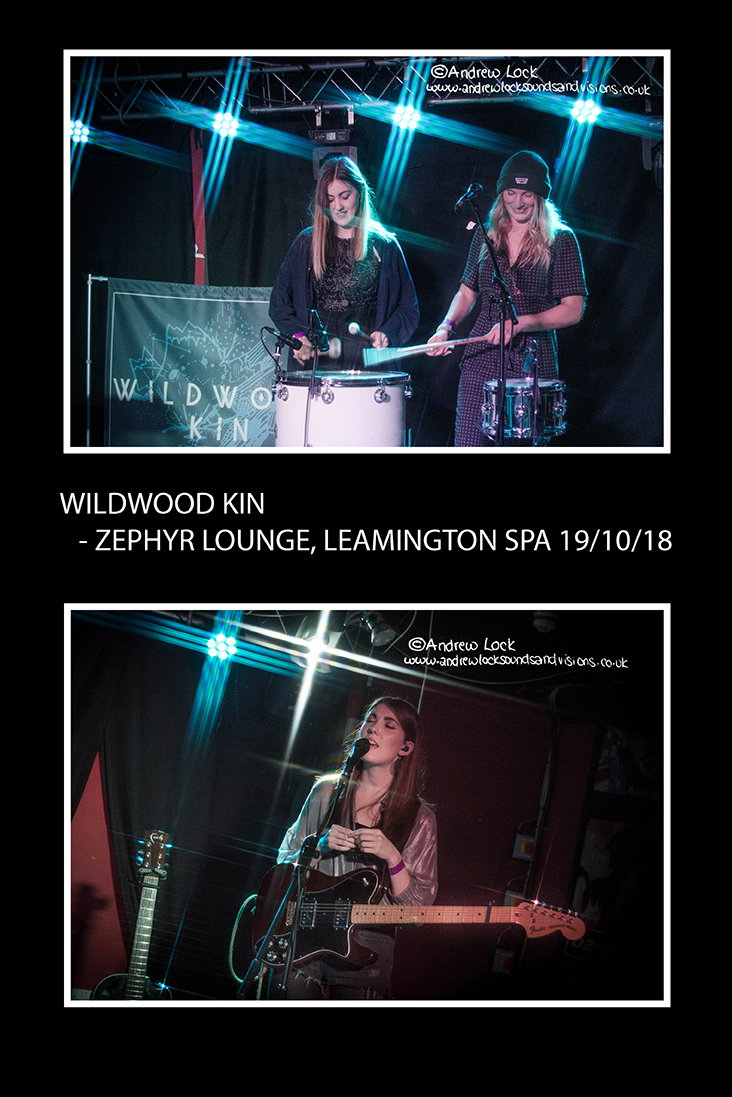 To steal a well known phrase (from a program I admit is a guilty pleasure!) FAB-U-LOUS, Wildwood Kin were simply stunning and after just a single show and one album behind they them have joined my list of most loved artists that also includes Mostly Autumn, Marillion, Kristy Gallacher and Steve Walwyn (with or without Dr. Feelgood) and after my years of following these wonderful artists that must tell you how impressed I was.
After my big exhibition a couple of days ago (will write about my feelings on that night soon) and my proposed semi-retirement from the gig stuff so glad I had already arranged this one and now just itching to see them play again.
As a bonus we also had two other amazing artists on the bill with a local girl who just gets better and better opening up proceedings Taylor-Louise, full of confidence with such amazing vocals at times soulful and delicate at others power packed and with occasionally shades of Tracy Chapman she wowed the crowd with a set of original numbers showcasing her impressive song writing skills such as 'Twenty Three' which just rolled along and a soul soaked ‘Jealous Eyes' and adding a touch of country to an inspired (thought it was an original on the night, thank God for research!) cover of Beyonce's ‘Daddy Lessons'.
Next up Speak, Brother with a set full of emotion and at times rousing anthemic numbers with an occasional nod to The Edge for me in the guitar stakes and a superb mix of folk and rock (even for me a touch of The Pineapple Thief style prog rock at times), fine harmonies with plenty of light and shade moving from slow-burning to pumped, up-lifting rockers and the frontman did a great job and getting the audience involved and splitting the floor into two halves with each half singing different lyrics at the same time was inspired
Standouts for me a stirring ‘Empire' and the unusually titled and beautifully mellow ‘Pond Boy' and loved the banter with the singer about the chance of a mosh pit during the set and some bright spark shouting out "a polite mosh pit", the second great set of the night.
Talking of great sets where to start with the magical headliners Wildwood Kin, well at the start I suppose! and so after walking casually onto stage to a roar of approval Beth, Emillie and Meghann took their places, Meghann in the centre on standup drum kit keeping the rocking beat of ‘Warrior Daughter' charging along with Emillie on guitar and Beth on Keys and bouzouki adding wonderful musical layers on either side.
The harmony and lead vocals throughout from this americana/folk/roots band (lets just call it wonderful music!) were the best I have ever heard live (nod to the sound guys as well) and both this and the overall musicality of the group with at its core that amazing drum work (covering so many styles) left me a little in awe of their talent while the emotion and spirituality in the music also left a big impression.
Lead vocals were swapped around all set so all three had chances to shine on both voice and instrument with gorgeous melodies and passion throughout, occasionally for me I heard echoes of Enya and possibly a drop of Corrs like Celtic magic to their sound and even on the rockier numbers a touch of The Bangles but all of this added to their very own sound gave them a truly distinctive style.
Every number was a stand out and the set included all of the bands unbelievably assured and brilliant 2017 debut album Turning Tides, ‘Run' was uplifting, so catchy and a crisp foot tapping delight, ‘The Author' was slightly more delicate, still upbeat with simply magical angelic vocals.
When the ladies slowed it right down the magic just increased as with the exquisite and tranquil ‘Dove' with its incredible vocal harmonies and atmospheric keyboard layers and ‘Hold On' where that Enya like sound came into its own and its stirring, positive lyrics were a thing of joy along with more heavenly vocals.
When they up the tempo it works just as well with the soul tinged ‘Steady My Heart' the flowing folky magic of album title track ‘Turning Tides' with its fab acoustic guitar work giving it extra groove, the more rocky ‘Taking Hold' which adds strong electric lead guitar including for me cleverly throwing in a few nods to the classic Spirit In The Sky riff and a soaring ‘Circumstance'.
Two covers from their brand new EP Voices of Equilibrium their own takes on some of their favourite numbers made the set and Stevie Wonders ‘Higher Ground' turned into almost a gospel number with such feeling and more rocking lead guitar and an amazing version of Tracy Chapman classic ‘Talkin' Bout a Revolution' were both inspired.
Encore ‘The Valley' was a beautiful low-key end to an amazing set, full of hope and joy which left you with a wonderful feeling in the heart.
You probably get the idea, I loved this set so much and in my 40 years of loving live music I have never seen a better live performance or one that has had more of an impact on me, unbelievable, stirring and heart warming stuff.

Loved my visit to Cropredy again this year, fab to see Wildwood Kin on the big stage going down a storm while other highlights on and my visit ...
[9 images] END_OF_DOCUMENT_TOKEN_TO_BE_REPLACED

Looking forward to my visit to that friendliest of festivals Cropredy again next month to take in the great atmosphere, overall vibe and of course a ...
[2 images] END_OF_DOCUMENT_TOKEN_TO_BE_REPLACED

I have often written about the wonderful, in fact the weird, thought provoking & wonderful evenings Johnny Satsangi puts on at the Zephyr Lounge ...
[1 image] END_OF_DOCUMENT_TOKEN_TO_BE_REPLACED