DR. FEELGOOD - BACK IN TOWN AND DELIVERING IN STYLE


DR. FEELGOOD - BACK IN TOWN AND DELIVERING IN STYLE 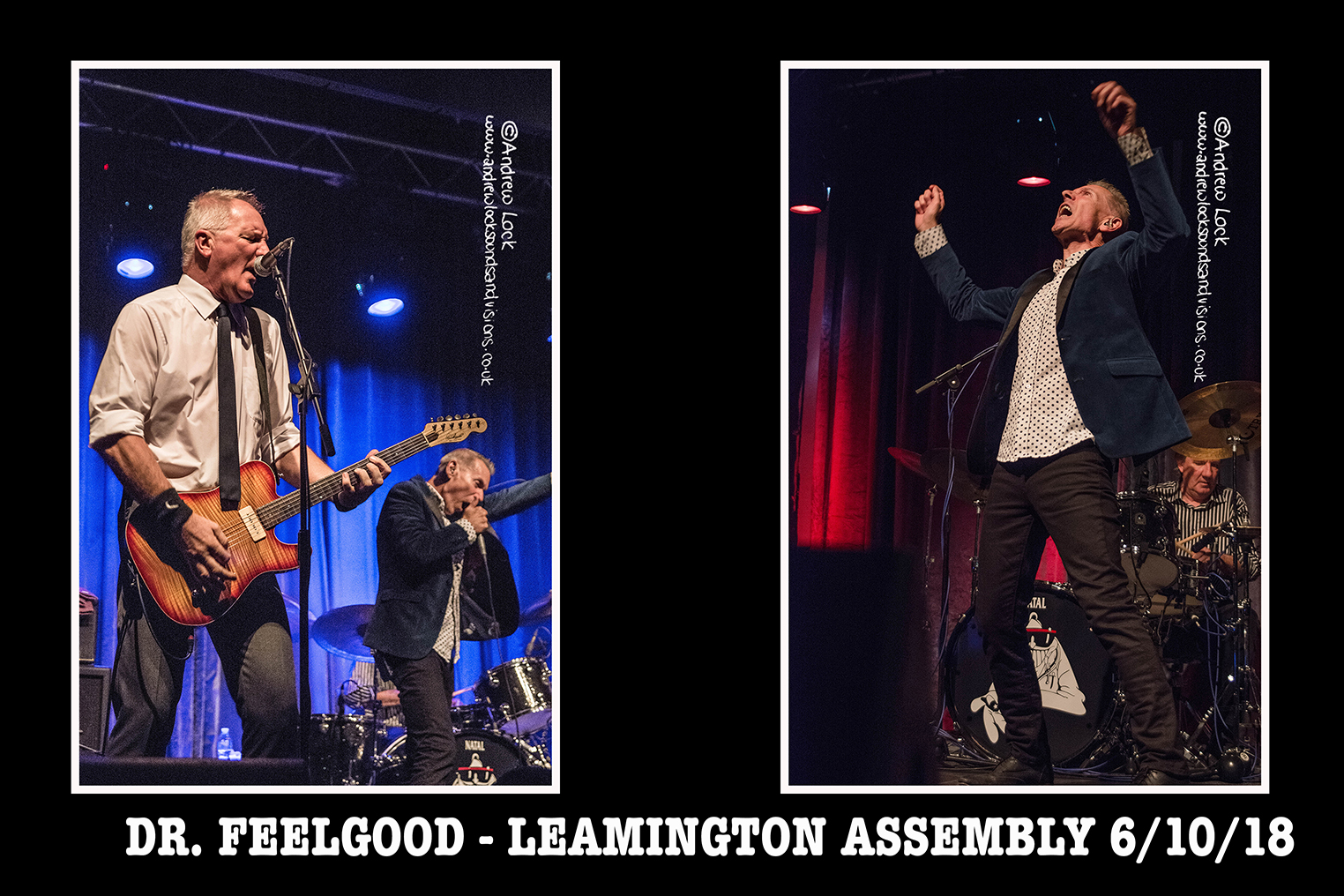 Always a highlight of the Leamington live music scene when Steve Walwyn brings the boys to town for a hometown gig (well for Steve!), a night of the finest uptempo r & b/rock and roll/blues was the prescription and of course they delivered.
Support band local outfit Satsangi were already in action when I arrived and for me they had an experimental edge mixing fairly heavy rocking beats, a touch of an Eastern groove, a little sax magic and at times a punk edge especially on the closing number (my set highlight) with its hints of early Blondie and Transvision Vamp.
Dr. Feelgood casually walked on to their usual retro, un-fussy stage set up with no grand entrance and proceeded to rock the joint like no one else can for the next 90 minutes or so with of course the bonus of the extra energy and support in the room for one of our own musical heroes.
Most of the bands classic crowd pleasers present and correct and lets face it they have quite a number of must plays that the fans almost demand including full throttle rockers such as ‘All Through The City','Going Back Home', ‘Gimme One More Shot', ‘She Does It Right', ‘Down at the Doctors' and of course ‘Milk and Alcohol' keeping the feet tapping and the heads bobbing.
We also had a trio of numbers with our Steve on slide guitar (and what a guitar it was, a metal bodied custom made beauty presented to him on tour) fab covers of blues classics ‘Dust My Broom' and ‘Rollin' and Tumblin'' and the heavy, groove laden Feelgood classic ‘Back in the Night'.
A buddy in the audience whispered to me that he has been going to the bands shows for over 20 years and rarely hears his favourite tune ‘Riot In Cell Block No. 9' only seconds before the unmistakable dramatic intro to that very number started and I loved the smile on his face.
Encore time included Steves spectacular interpretation of the John Lee Hooker tune ‘Mad Man Blues' where he pulls off all the tricks and guitar techniques with panache before being joined one by one by the rest of the band (nice touch with vocalist Robert Kane handing Steve a nice chilled glass of white wine after his amazing showpiece) and a pulsating ‘Route 66' which really had the place rocking.
There you have it no gimmicks and no frills, "It's only rock and roll but I like it" and luckily I am not the only one.

I reviewed (back in November) the most recent single from Satsangi, "World Falling Down" and mentioned a little bit at that time about their ...
[1 image] END_OF_DOCUMENT_TOKEN_TO_BE_REPLACED

Fresh out from Satsangi is "World Falling Down", (their first since they raided their own vaults for the "Don't Want Anything But More" single ...
[1 image] END_OF_DOCUMENT_TOKEN_TO_BE_REPLACED

During these turgid times when there is a distinct danger of every successive day seeming like its predecessor, it's helpful to be surprised now ...
[1 image] END_OF_DOCUMENT_TOKEN_TO_BE_REPLACED

Satsangi, never a band to shirk a challenge nor to be meekly led by fate nor wander aimlessly down roads many others have trodden previously, seem to ...
[1 image] END_OF_DOCUMENT_TOKEN_TO_BE_REPLACED

Well life under lockdown continues to evolve doesn't it: even, or perhaps especially, our musical life.
[1 image] END_OF_DOCUMENT_TOKEN_TO_BE_REPLACED

Some excellent news for lovers of music which dares to be a bit different.
[1 image] END_OF_DOCUMENT_TOKEN_TO_BE_REPLACED

AMBER RUN have announced an acoustic live show ‘AMBER RUN UNPLUGGED' at The Assembly, Leamington Spa on 10th May 2022 TICKETS ARE ON SALE NOW ...
[1 image] END_OF_DOCUMENT_TOKEN_TO_BE_REPLACED