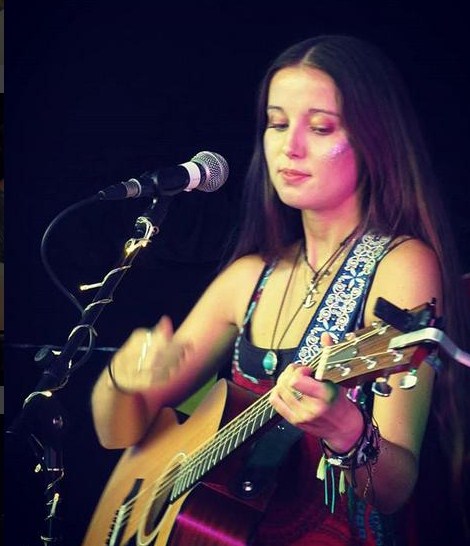 Firstly an apology: this is not & cannot pretend to be a broad overview of the 2018 Godiva Festival (the 20th in fact): I think that is beyond anyone given the number of acts over so many stages. This is "my" Godiva and I'll have to leave reviews of the Main Stage &  so on to other writers, not least the mainstream media who I'm sure will cover the marquee acts. I should also like to steer you to the posts & photos of "Hot Music Live's" Alan Moores who captured many acts I saw & more which I could not. I caught bit of some Main Stage performances but never a whole set as I was involved (to my great pleasure) in helping with the two stages dedicated to local music from Coventry & Warwickshire: the Acoustic Stage & the BBC Stage: both were organised by local musician & promoter Sam McNulty with his superb team: Rich Keogh, Viktoria  Hricíková & Jeff Morris. The sound on both over the three days was as superb as the team despite the logistical & technical challenges of hosting 70 acts over three days, managing changeovers, varied lineups & instruments and despite the inevitable dramas (one performer had two guitars malfunction before performing her set on a third and the very next act managed to have their double bass break. Twice. Believe me watching a double bass break mid song is quite spectacular), They kept right on schedule all weekend: oh and not forgetting the need to be bang on time & sound on the BBC Stage for their live broadcasts. And when they were not making things work for others, each of the team played several sets as musicians in their own acts or supporting others.

As I said, there were more than 70 local artists on show (more than 80 including acts playing on other stages) and I was privileged to watch the majority of them. The diversity was impressive, as was the quality & given the large number of acts who must be of "Godiva quality" who didn't play this year, the impression is of a tremendous local music scene.

Equally important to me was watching the level & quality of support. So many artists supported each other: either before or after their own sets, or even returning on other days to do so. The whole vibe was excellent & the format enabled lots of guest slots with performers able to play on tracks they had guested on in the studio.

The mixture of originals & covers was interesting: some opted for their own compositions, others, despite having extensive back catalogues played covers-only sets, yet others were covers acts of course & others introduced crowd pleasers among their own songs.

At this point, you might be fearing an immense list of detailed reviews of fifty odd acts: I suspect that that would stop most readers so reluctantly, as there are so many acts I'd love to cover with the depth they deserve, I'll cherry pick a bit.

Favourite covers of the weekend? Contenders must include the Caprines' version of "Be My Baby", the Suns of Rest's stunning "Strawberry Fields Forever" or the entire Danny Cunningham set which got the most vigorous audience response on the Acoustic Stage of the weekend (and included his old Squad colleague Sam McNulty getting up for a rendition of their classic "Eight Pounds A Week": which I suppose doesn't really count as a cover).

From among the various "Alternative Sounds" stars playing, it was great to see Izzie Derry bring her full band to Godiva on both the Friday night (Acoustic Stage) and Saturday (BBC): her older songs being rearranged to excellent effect (interestingly often played slower to bring out the dynamics still more) plus some brilliant new material which I am looking forward to her recording. Catch her at the "Hot Music Live Introducing" night at the Zephyr Lounge on October 20th. Another band you'll see & hear that night are Crokodile Tears who played a set the day before the release of their new album "Old Skool": unsurprisingly material from that appeared alongside their classics such as "Egg ‘n' Chips" and "Francis Bates" plus the customary humour. I look forwards to hearing more of "Yoko" etc and in time perhaps "Bobbie" or "Shirley's in Birmingham" will join in too (I'm not the only one judging by audience requests for songs which have neither been played live by the Croks nor officially released up to that afternoon).

Keith Fabrique played a very well received set on the balmy Sunday afternoon: he may have been on an acoustic guitar but the feel was very definitely rock. As well as his signature song "Black Ice", Keith took advantage of the opportunity to bring up other musicians present for songs they had recorded together: his brother Steve for the latter's "You Scratch My Face" (a very powerful number) and Chris Sidwell for "Inside Looking Out" (or "Voyeur Song" as it appears on Keith's current "Talk On the Radio" album).

If Danny Cunningham was the storm raiser on Saturday night, that role fell to Matt Cattell on the Friday. Tasked with playing live on an acoustic guitar with Jake Bugg just down the field & Cradle of Filth yards away in their tent, he rose to the occasion and swiftly created a fine atmosphere with mobile phone lights lighting the dark & his two rivals impossible to hear.

For many people, the return to live action of Fall Girl (Michelle Sciarrotta) was a standout moment: and the BBC agreed, broadcasting her short set of songs from her forthcoming album live. Unfortunately sidelined from being able to play her guitar for many months, she was able on this occasion to manage quality rather than quantity. I personally cited her summer single "Anywhere" as a classic with its upbeat, optimistic Blondie/shoegazing sheen of guitars & voices yet at Godiva, it showed another facet as a poignant, wistful ballad: any song with more than one way of being interpreted is an excellent one in my book.

Of other originals artists, an interesting juxtaposition were Calton Kelly & Viktoria (I'd like to thank them at this point for kindly offering tracks for future "Alternative Sounds" volumes as have fellow Godiva 2018 artists Caleb Murray & Bazza's Dispensable People). Both are pianist/singers, each played on both stages and in fact shared their keyboards with each other. Both are highly talented and play regularly in Coventry (be nice to see them play elsewhere in Warwickshire if possible) yet have highly distinctive and original styles: Calton Kelly is the epitome of the classic: a soaring & beautiful voice with beautifully crafted songs. Viktoria has definitely a style entirely of her own in terms of songwriting: I can't begin to classify it, so I suggest that you catch her live and judge for yourself. Fortunately she does explain each song beforehand.A slight digression here as I was pondering over the weekend why, given that so many local artists we saw were highly talented as vocalists, instrumentalists and writers and given that their abilities often don't seem any less than some who are mega successful: what is needed to make the breakthrough? The potential is definitely there. One might hope that the 2021 spotlight might help but it would be good if they didn't have to wait three more years.I'll have to take a run through some of my other highlights a bit more swiftly before I lose your attention now I think....

If you like local musicians with hearts as big as the Clash: check out Bazza's Dispensable People.I'm looking forward to seeing

The Hatstand Band (they of the afore mentioned disintegrating double bass) at the Magic Lantern.

I'd heard much talk of the fast emerging High Bandwidth & was very pleased to finally catch them live, as I was to see Angelo Cardone: another very unique talent coming through the open mic circuit: hope to see much more of acts like this in the year ahead. I'm sure Autopilot will do well given their well received start to their career. Joe Dolman (who also played multiple stages) is an artists whose career is definitely swiftly progressing: it is so great to see how another product of the local circuit is doing so well  and yet remaining as connected to his fans as ever. If only more people knew of the Caprines, they could be one of the really big local bands: in fact it was standing watching them with Brody Swain and discussing the issue that got me thinking about "what makes one act more successful than another?"

There is no inherent quality problem with local music: the talent is there in significant amounts. All the above (and more) are delightful & deserving artists who support each other, play community events at their own expense & donate wonderful music to local compilations. In return, they deserve the attention & support of local music lovers to the greatest extent possible.

Last evening at Earlsdon Carnegie Community Library saw the "Hush! A Summer Celebration" event, another in the series of collaborations between the ...
[8 images] END_OF_DOCUMENT_TOKEN_TO_BE_REPLACED

I do like being taken be surprised by music (to be honest I'm not sure I enjoy reviewing music which fails in some way to do so) and I hope I am ...
[1 image] END_OF_DOCUMENT_TOKEN_TO_BE_REPLACED

If you are anything like me, among the myriad challenges to our communities currently being presented, the probable curtailment of live music for ...
[4 images] END_OF_DOCUMENT_TOKEN_TO_BE_REPLACED

One conundrum I face with reviewing the calibre of artist I tend to focus on (it's an enjoyable challenge really) is how to handle it when ...
[1 image] END_OF_DOCUMENT_TOKEN_TO_BE_REPLACED

It's odd: the more reviews you write, the more patterns emerge.
[1 image] END_OF_DOCUMENT_TOKEN_TO_BE_REPLACED

December 12th is a date many people have possibly been looking forwards to or dreading for various reasons.
[1 image] END_OF_DOCUMENT_TOKEN_TO_BE_REPLACED

I could, I suppose, run through every act I saw & enjoyed at the 2019 Godiva Festival in detail which would give them the credit they thoroughly ...
[12 images] END_OF_DOCUMENT_TOKEN_TO_BE_REPLACED

Izzie Derry live at the Godiva Festival: not once but twice

While everyone at "Hot Music Live" is getting excited about the "Hot Music Live Introducing" night at the Zephyr Lounge on 20th October in ...
[1 image] END_OF_DOCUMENT_TOKEN_TO_BE_REPLACED