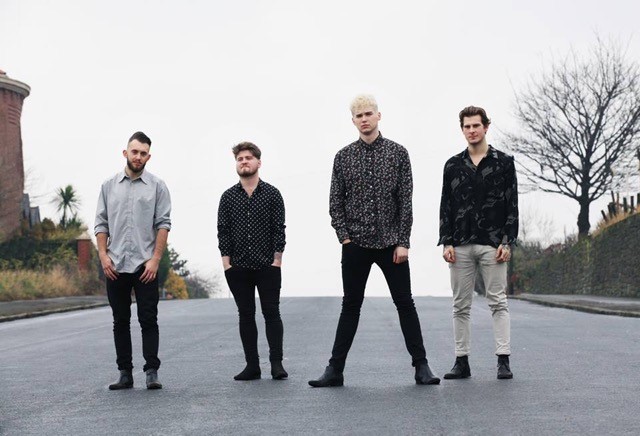 Jordan Allen, a four-piece band from Bolton, play Camper Calling Festival on 25th August at 2pm amongst their upcoming string of festival dates.

JORDAN ALLEN have confirmed their full UK festival dates for Summer 2018. The band are set to play slots at the likes of Sheffield's Tramlines, Y Not Festival and Kendal Calling; ending their run of dates with shows at Preston's Cathedral and Doncaster's The Leopard. Full dates and info below.

The band have recently unveiled their first new material of 2018, a single that stakes its place as perhaps their most ambitious and accomplished outing to date: 'Synchronised'.

"Are we synchronised? Are we hypnotised? By a single point in space and time." muses Jordan as he embraces his inner Brian Cox and reaches for the heavens with this astronomical and anthemic new single.

With eyes firmly fixed on the horizon, 'Synchronised' is a daring departure that sees the Bolton band take a running jump out of their comfort zone and leap with two feet forward into the future.

After a whirlwind of national radio acclaim (Radio X/Virgin Radio/6Music), releasing smash singles 'R.O.S.I.E' and '110 Ways', not to mention undertaking a national touring schedule that would see the band sell out headline shows to adoring audiences across country, settling back into the routine of daily life again was never going to be the easiest of tasks. Determined to continue with his studies at University in Leeds, the singer found himself increasingly distracted by the events of the last year, along with the personal issues that had inspired the likes of '110 Ways'.

"Moving back to Leeds, I found it quite difficult to start writing again, keeping up with my final year of Uni work, rehearsals, shows and the inevitable nights out took its toll and when I'm not writing, I get quite down. It's the only way I really get my emotion out, I started to miss my Dad, and question if everything was going the way I'd first hoped."

Whilst 'R.O.S.I.E.' had provided the band with one of the most euphoric and emphatically loved sing-a-longs of their catalogue, its breakout success would prove to be something of a blessing and curse. Clouded with with the inevitable writer's block that so often comes hand-in-hand with distraction and procrastination, Jordan increasingly found himself conflicted with thoughts as to how, and if, the band could possibly better their best.

But in something of eureka moment on route to University one morning, lost deep in thought Jordan would finally hit upon the nugget of wisdom he had been seeking to put him back on track.

"I realised that I wrote my best material when I embraced chaos. I had to forget about everything else, regain my focus and do something that people may not expect from us musically…"

From that moment on, the clouds evaporated and inspiration struck Jordan with a ‘Synchronised' shaped lightning bolt.

"'Synchronised' was really written about recapturing the passion I felt when I had started to write music when it was the only thing I cared about. Once I had this clear in my head, it came together faster than any song has before. I wrote the lyrics on my way to Uni one day and recorded it singing into my phone along the way. By the time I got in, I couldn't concentrate. I knew I'd written the song I needed, I took it to the band and they all agreed. The passion was back and we knew we'd stepped it up to the next level."

With its glistening reverb-washed guitars, powerful vocal hooks and introspective lyricism, 'Synchronised' is just the latest glorious moment from a band striving to shatter expectations on their route to the big time.

Written by Jordan Allen and recorded at Red City Recordings, Manchester in March 2018, 'Synchronised' was produced by David Radahd-Jones. Synchronised was released simultaneously to a new B-Side 'Half Life Lover', also available to listen to now at following streaming sites:

Listen to 'Half Life Lover' here:

With 'Synchronised' sure to be a corner stone in their always thrilling live set, you can catch Jordan Allen at a slew of newly announced shows for 2018 which include headline shows and a string of high profile festival appearances:

In 2017 alone, the band hurtled through sets at major festivals such as Tramlines, Dot To Dot, Live At Leeds and Isle Of Wight; had a blast on the road with newfound touring buddies The Sherlocks including an incredible performance to a 2500 capacity crowd at Manchester Academy; bothered the airwaves once more with the unleashing of rowdy fan-favourites ‘R.O.S.I.E' (as produced by David Rahad-Jones) and ‘110 Ways to Make Things Better' which both tallied up plays on BBC Introducing, BBC Radio 6Music, and Radio X-Posure Playlist as well as being made Mark Richardson's Record Of The Week on Virgin Radio ; bowled fans new and old over with a 16 date sell-out UK winter headline tour; plus, to cap it off the band were even granted the honour of illuminating the Bolton Christmas Lights.

Propagators of intelligent rock'n'roll with true heart, Jordan Allen are a band you can believe in.