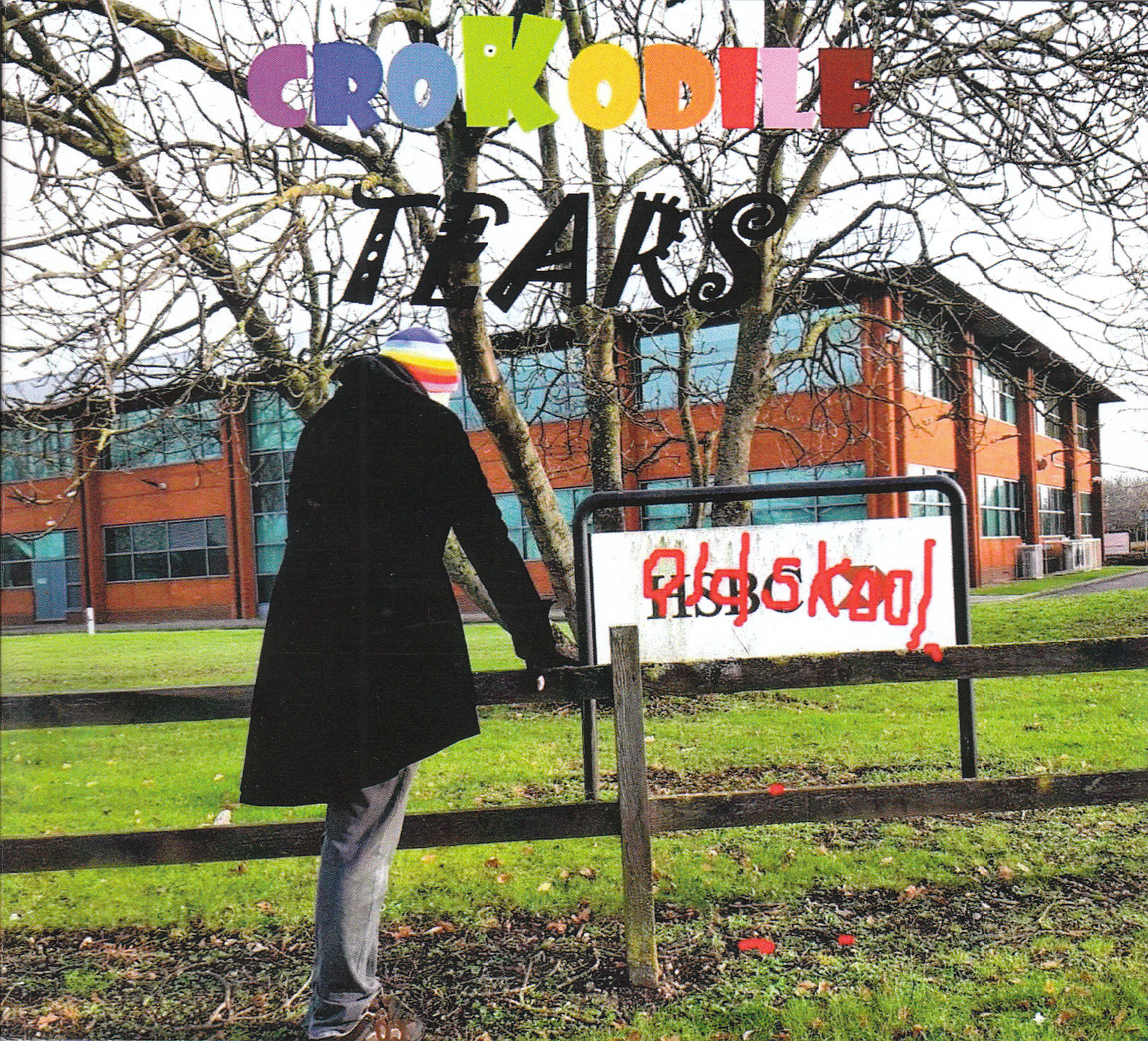 Crokodile Tears  have been releasing albums now for some 33 years since their eponymous debut when they were known as the more conventionally spelt "Crocodile Tears" (a release which was praised by Jerry Dammers). The constant has of course been singer/songwriter Chris Sidwell (the lineup changes in fact sparked the name tweak when Chris began working with different musicians: the rest of the original lineup being essentially the cult band "Pink Umbrellas").

Nevertheless, the latest album, "Old Skool" which officially opens its term on September 3rd features among Chris' many collaborators former Reluctant Stereotype, Pink Umbrella and long time Primitives producer  Paul Sampson who has played with him from that very first album & produced & mixed this one too.

Chief current Croks (though this doesn't mean that even they play on every track) are Alf Hardy and Jerry Richards. Both were/are also in Earthlab, Alf is well known for his work at Cabin Studios and Jerry is of course a Hawklord and former member of Hawkwind. Joining them , Chris & Paul, are local musician, producer & broadcaster Keith Fabrique, local legend Sam McNulty (Squad/Giraffes), harmonica player Bryan Lea Bradford, sitarist Chris Cook, violinist Nigel Ward and others too numerous to mention. Tracks are mainly written by Chris, some with Jerry and/or Alf plus a jam co-written by the band with Chris Cook, a cover of the Lennon/McCartney "Norwegian Wood" and Jerry's wonderful ‘Coventry & Western' (as Alf dubbed the style) jig dedicated to renowned Elizabethan necromancer "Dr Dee": a great live favourite.

If the music is eclectic (and it most certainly is: this band defies genre categorisation), the subject matter is even more so. Apart from an instrumental celebrating a long deceased alchemist, the album covers a bewildering array of lyrical targets from the haircut of a national sporting treasure to ecology, astrology, photography and gender stereotyping.

However, if there is a theme (and many Croks albums do possess one), it is about love, the human condition and the passage & perspectives of time. The whole philosophy of the band is to create songs from childhood perspectives or those of adults behaving or thinking in a childish way. This at one level produces a great deal of (gentle & good) humour, but peeling at the layers of the onion in most songs reveals and rewards the listener with deeper messages. Crokodile Tears can never have produced such a beautiful set of album bookends (we are informed that "there are no secret tracks") as "Kids" and the closing "title song" called "Mermaids". Both, in their own way look back to the childhood of their narrator & can make you cry in a way "Bobbie"  or "Shirley's In Birmingham" will make you laugh unless you have a heart of stone.

The Croks aim to make each new album their best yet and there can be no doubt that despite the excellence of their previous work, this one is a masterpiece. In a fair world, this album would get the airplay and critical attention its inherent qualities merit. However in the current musical media climate where lyrical sophistication, subtle performances and above all maturity fail to excite those in control of such decisions, one can only hope for someone with wit & discernment in the mainstream to open their ears & listen to it objectively to judge it on its merits. At any event, the local aficionados will appreciate it, buy it & continue to attend their gigs & the local broadcasters & writers with that discernment will carry on appreciating true & enduring quality: you know who they are. If you meet someone who likes Crokodile Tears, you know you've met someone you can respect.

Despite the release date being some weeks away yet, copies of "Old Skool" can already be bought at Temperance in Leamington.

If my review of the forthcoming album has whet your appetite for Crokodile Tears or if you read Paul Englefield's great review of their Magic Lantern gig in the magazine, you can catch them live on the eve of the album release at the Godiva Festival on 2nd September, at the Zephyr Lounge on 29th September for the "Alternative Sounds"/APE Promotions night (with Roddy "Radiation" Byers, Satsangi, Grassroutes, Jackdaw with Crowbar & Mr Binx) and again at the Zephyr Lounge on October 20th for the "Hot Music Live Introducing" night with Clemency, Izzie Derry, Violet & Luna Kiss.

In the classic rock arena, it's the epic themes that matter, burning casinos, the desperate camaraderie of the battlefield and the countdown to ...
[1 image] END_OF_DOCUMENT_TOKEN_TO_BE_REPLACED

In its relatively short lifetime, the former "Coventry Evening Telegraph" building has become a superb & iconic venue with a tremendous momentum over ...
[6 images] END_OF_DOCUMENT_TOKEN_TO_BE_REPLACED

It will not surprise you, i imagine, to learn that a talk by one of our area's most individual & quirky musical talents would be both highly ...
[1 image] END_OF_DOCUMENT_TOKEN_TO_BE_REPLACED