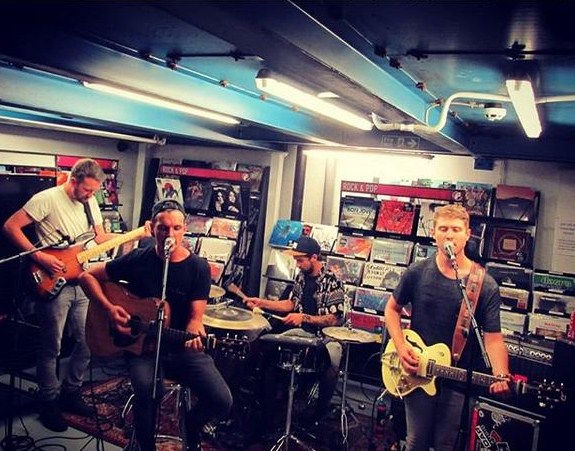 If people think that the closure last autumn of Leamington's HEAD Records was a blow to the music lovers of Leamington: they were wrong. I know so many people who whenever they came into the town would check out this superb independent shop. It's loss was felt far beyond the town boundaries. I myself was driven to write credits for two "Alternative Sounds" albums bewailing its loss such was the support they had given the project.

However, as many "Hot Music Live" readers will know, the phoenix has risen from the ashes & HEAD is open again in its previous premises in the Royal Priors. Simon Dullenty & his team have taken what was great about the old shop and pushed it still further: the range on offer is as good if not better and there are so many plans for instore performances as well as the less well seen engagement with local artists & organisations which is so mutually supportive.

To mark the relaunch, today saw a spectacular triple instore event with top local band Luna Kiss performing & to demonstrate the aforementioned links with the like minded, Ella B Music promoted both the Ellipsis and an exciting rap band hitherto unknown to me, Freezacrowd: watch out for them.

As you might imagine with acts of that calibre in a music store, the atmosphere was crackling & the vibe was palpable. Add in the presence of Keith Hancock (a music legend in his own right) and Jim Layton with copies of their just published history of Leamington music, ‘Fire in the Belly' and you would not be surprised to hear that among the fans of the bands, the regular customers, casual customers and the plain inquisitive, there were a number of prominent members of the local music scene instore. Plus a BBC crew filming a documentary to air in 2019.

I believe passionately that one of the key and unsung elements in a healthy music scene is a great independent music store at its centre: yes to sell local acts' music, yes to sell the music which inspires them, but also to be a clearing house for gig information, fanzines and even just gossip: how many great bands have been formed by meetings between strangers bonding over a shared passion in a music shop?

We nearly lost HEAD: let's make sure we don't lose it again. A bit of support from all those who've appreciated it are what will help sustain this business in challenging times.

Out now from Luna Kiss is their new single "Lust For Blood", the follow up to the excellent "Operate".
[1 image] END_OF_DOCUMENT_TOKEN_TO_BE_REPLACED

If like me, you've been enjoying the excellent video from Luna Kiss for "Operate" (check it out via https://www.
[2 images] END_OF_DOCUMENT_TOKEN_TO_BE_REPLACED

To make up for not being able to gig, Luna Kiss have released a new single "You Are (Live Studio Session)" which is intended as a gift to their ...
[1 image] END_OF_DOCUMENT_TOKEN_TO_BE_REPLACED