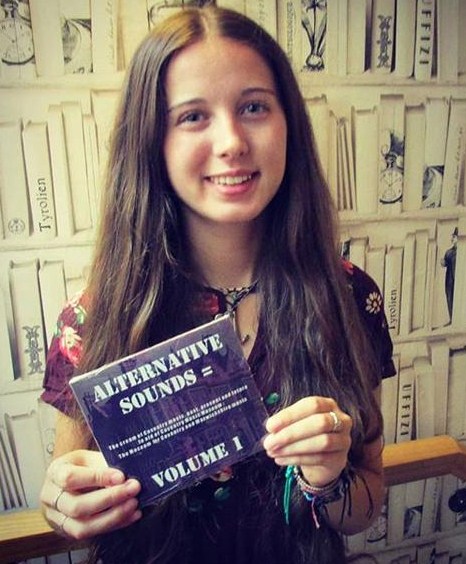 The purposes of this event were several: having released a four track EP and two 21 track albums of "the cream of Coventry & Warwickshire music, past, present & future", there was a sense that a form of celebration of the project so far was in order with half an eye on future releases & live gigs involving "Alternative Sounds" artists. Equally, with a sense of community & shared ideals emerging, it was also felt that a get together might be both useful & enjoyable (you might call it a chance to network but I'm not sure people who came along would put it quite that way): and of course it seemed suitable to play the music & have some of the artists play: for which the organisers were most grateful.

And so it came to pass: old friends, some of whom had not seen each other for years met & many people became acquainted for the first time & were able to express their mutual admiration.

The artist getting the most airplays so far & the one with perhaps the clearest upward career trajectory was Izzie Derry & she was a most popular performer on the night: not everyone had seen her live before so as you might imagine, several were eager to meet & hear her. She even treated us to a brand new song which I for one can't wait to hear recorded, though I gather I need to steel myself for something of a wait in that respect.

Other artists who played included the every popular Sam McNulty (Squad/Giraffes), Keith Fabrique and a seering set from Prole Position's Ashley Spindler. Due to the nature of the event, sets were mainly solo and mostly acoustic, but that did not remotely affect the intensity of the performances: several of which I thought burnt even more brightly than on record.

Two artists who tend to work in looser band structures, Cary Lord of Blush & Chris Sidwell of Crokodile Tears duetted on two numbers as well as their own solo songs and each captured the mood of the event with rare performances from deep in their own back catalogues: Chris with "The Sideways Man" which came out for his Digital Dinosaurs in 1979 and Cary with her 1980 L'Homme de Terre song "Get a Grip".

Looking round the room seemed to illustrate much of the local music story: I spied two members of the legendary Squad, two Pink Umbrellas, three of the original lineup of Crocodile Tears, members of the Reluctant Stereotypes, ATTRITION, Stress, Skeet, Blush, L'Homme de Terre, Prole Position, ENGRAM......the Giraffes.. no less than four owners of iconic local studios where the songs were recorded...

This hopefully will become a regular event especially as more artists become involved in "Alternative Sounds": the project team are already working on "Volume Three" and are working with local groups of like minded people including "Hot Music Live" (watch out for news of a Zephyr Lounge gig 0n 20th October) and APE Promotions (ditto September 29th) to present the artists involved live.

Footage of some of the performances at the Golden Cross can be found on the "Alternative Sounds" Facebook group page: https://www.facebook.com/groups/968192833284038/

Last evening at Earlsdon Carnegie Community Library saw the "Hush! A Summer Celebration" event, another in the series of collaborations between the ...
[8 images] END_OF_DOCUMENT_TOKEN_TO_BE_REPLACED

I do like being taken be surprised by music (to be honest I'm not sure I enjoy reviewing music which fails in some way to do so) and I hope I am ...
[1 image] END_OF_DOCUMENT_TOKEN_TO_BE_REPLACED

If you are anything like me, among the myriad challenges to our communities currently being presented, the probable curtailment of live music for ...
[4 images] END_OF_DOCUMENT_TOKEN_TO_BE_REPLACED

One conundrum I face with reviewing the calibre of artist I tend to focus on (it's an enjoyable challenge really) is how to handle it when ...
[1 image] END_OF_DOCUMENT_TOKEN_TO_BE_REPLACED

It's odd: the more reviews you write, the more patterns emerge.
[1 image] END_OF_DOCUMENT_TOKEN_TO_BE_REPLACED

December 12th is a date many people have possibly been looking forwards to or dreading for various reasons.
[1 image] END_OF_DOCUMENT_TOKEN_TO_BE_REPLACED