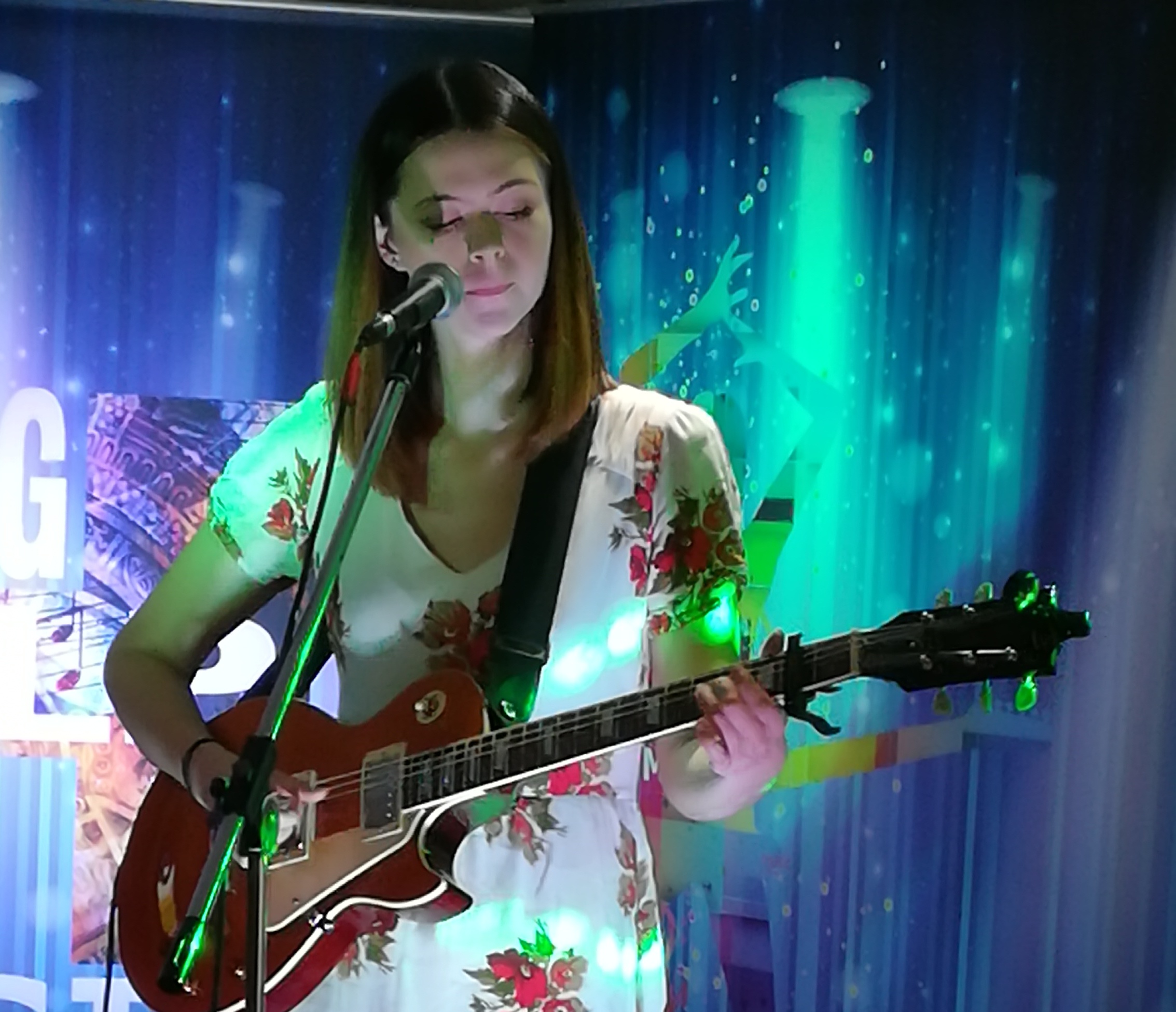 I have been attending the Big Help Music Showcases on and off for a number of years now, but the event at The Fusilier on 20th July 2018 was something special.

On the face of it we could expect a fairly run of the mill show, where the young artists under the tutorship of Dutch Van Spall, Nicky Dawn Stewart and the team at BHM get the chance to experience appearing in a somewhat noisy but appreciative Friday night pub crowd.

On this night something happened to make them all pull out their best performances and how!  Opening one of theses nights is always difficult as you have to get the attention of the audience. Elan Marie O'Callaghan has always been able to do that, she commands attention, not through power or volume, but by the quality of her voice singing in two languages. She accompanied herself on her electric guitar, which can be challenging. Elan is quite confident and justly so and this is conveyed to the audience. Her cheerful personality reaches out to everyone in the room.

Lorna Dea was in charge tonight as she often is, doing a super job of running the evening and her next job was to introduce a young man on his Fusilier debut. Twelve year old Theo Gladman looked nervous, but by the time he was halfway through his first song he had found his stride. I did gesticulate to him to take his hands out of his pockets, but I think this was a manifestation of his nervousness. Later in his set I regained my seat, where unfortunately such was the crowd, I was unable to see him, but this allowed us all to just enjoy the sound of him singing. He did well and we soon forgot it was his first time on one of these showcases.

Lorna Dea got her chance to perform next. She is a Fusilier favourite, has a lovely friendly style and is well able to match with backchat, the good natured comments in the song intervals from the regulars and staff at the pub. She is a good commére and an even better song writer. We all loved her new song "In Too Deep" which joins her growing catalogue of self-penned compositions. She does good covers too, one that I had not heard her sing before was "Pack Up" by Eliza Doolittle. which contains a line or two from a well loved World War 2 song.

Ree Reesby is a demonstration of what Big Help Music can do for a talented youngster. Eight months ago this fifteen year old was a bag of nerves with a good voice. She was so stiff with fear that she virtually had to be carried on to the stage and placed in front of the microphone. Ree has been gaining in confidence ever since. This night she was so animated in her performance that it was difficult in low light condition to get a photograph of her. Not only that, her singing has improved too as indeed has her whole act. Her parents are so proud of their daughter's development with every justification. This is a very different girl who I first saw in December at the BHM Christmas Concert. It says something for the talent spotting of the company that they had the confidence to put her into that show, even though she would have preferred to be almost anywhere else that evening. She was brilliant.

Abz Winter recently came third in a competition to find the most talented singers in the Rugby area. She was robbed. What a voice this girl has. Big power ballads are her thing. However she opened her set with an up tempo version of "We don't have to take our clothes off" in the style of Jermaine Stewart. Then in complete contrast a very emotional and spine tingling rendition of Queen's "Only The Good Die Young" which had some of the audience in tears. There was added poignancy because the following week she was to attend the funeral of a friend recently passed. This girl can ring the changes and proceeded to do so by going into RAP next, closing her set by not just singing, but delivering the powerful "I (who have nothing)" by special request of  Sean the barman who is a character all on his own. My wife requested a coffee (her second) and he produced it in a pint pot mug full to the brim. I assume he didn't want to make a third.

Beth Dyson From Nuneaton is a lovely girl, who has both a mature and fun side when selecting her songs. I certainly did not expect to be singing along with Connie Francis' "Stupid Cupid" on a Friday night in the Fusilier. I think my wife and I were the only ones in the room apart from Beth who knew the words. Then she went straight into an Amy Winehouse song (what a loss that girl was). The maturity of her song selection is matched by that of her voice. I would love to hear her and Abz Winter do a duet in a suitable song, - it would be awesome. Beth has an EP coming out in October, she has already started filming the videos for it. We look forward to seeing them. Another classic song ended her set the immortal "Perhaps, Perhaps, Perhaps."

What do you call a sound engineer, who is also a personal trainer, a guitarist, singer and song writer? Kieran Taylour that's what. He is a consummate performer who actually won the competition mentioned above and is rightly in demand for dinners, weddings and family gatherings. I also heard a rumour that he features in one of Beth Dyson's videos as an artists model. His set comprised of a mixture of covers and some of his own excellent original songs. I always enjoy seeing him perform and I know for a fact that I am not alone in that.

Something happened this night, to make all the artists excel in their own special way. It was quite the best of the BHM showcases I can remember. They are held three times a month at the Bear in Rugby, plus The Fusilier and the Waterside Inn, which are both in Leamington. Keep an eye out for the line ups and dates, Next one? The Bear, Rugby 3rd August, all are free entry, but you have to buy your own beer. See you there?

The plethora of summer music festivals that take place around the world offer music lovers many opportunities to see top-flight and established ...
[11 images] END_OF_DOCUMENT_TOKEN_TO_BE_REPLACED

Big Help Showcase at The Fusilier

Music at the Fusilier

Music at the Fusilier 20th January 2017The first of the regular Big Help Music's showcases in 2017 at the Fusilier in Sydenham, Leamington took ...
[6 images] END_OF_DOCUMENT_TOKEN_TO_BE_REPLACED